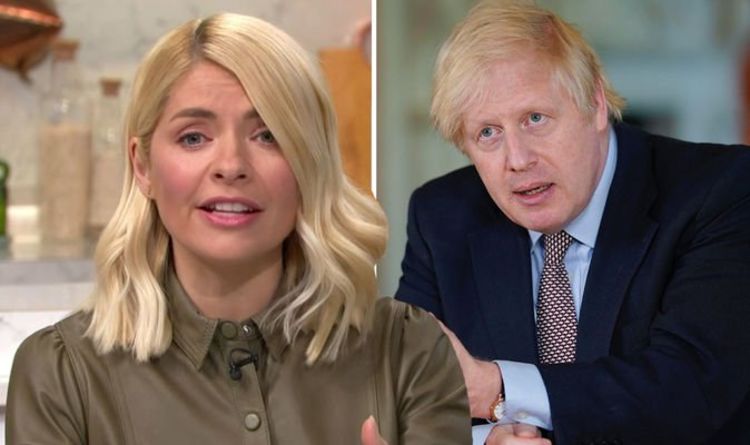 Prime Minister Boris Johnson’s speech left many UK citizens puzzled as he explained the new lockdown rules and introduced a new Covid Alert System. Today, Holly Willoughby, 39, and Phillip Schofield, 58, expressed their confusion about the new guidelines on This Morning.

The presenting duo kicked off the show by addressing the Prime Minister’s speech and his new slogan, “Stay Alert, Control the Virus, Save Lives”.

During his speech, Boris said some primary school children could be going back to school as early as June, which mother-of-three Holly didn’t like the idea of.

He also said people were allowed to sunbathe in public spaces, if they keep their two-metre distance, but didn’t mention if citizens could now see their extended family.

Talking alongside Phil, she said: “The problem is, we’re all just about holding on.

READ MORE: Jeremy Clarkson on girlfriend Lisa ‘I know something is wrong’

“We’re doing so well to keep our spirits up. But when there’s this level of confusion, it knocks you back.

“When you feel like you’re just keeping afloat, it just knocks you back again.”

Phillip chimed in: “Well, that’s the trouble with this morning because we now lack clarity. I understood, until last night.”

The Prime Minister told the nation the Government is taking the “first careful steps” in returning to normal life.

Addressing the situation with schooling, he divulged: “In step two – at the earliest by June 1 – after half term – we believe we may be in a position to begin the phased reopening of shops and to get primary pupils back into schools, in stages, beginning with reception, Year One and Year Six.”

He added that the Government also wanted secondary school pupils facing exams next year to “get at least some time with their teachers before the holidays”.