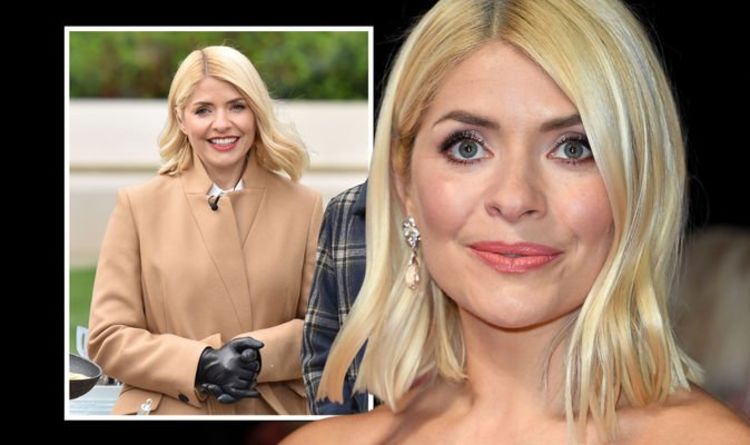 The game show has run of the broadcaster’s sister channel since 2008, with Holly being one of the original members of the show.

She joined Leigh as Keith and friend Fearne Cotton, 38, to front the late-night quiz programme and over the years, has captained her team to numerous victories.

Whilst she taken maternity leave over the past 12 years, with the presenter being replaced by the likes of Gino D’Acampo, 43, the mother-of-three has always returned to the panel.

Now, after source reports claimed the presenter was leaving the show, Holly has confirmed the news via her social media channels.

A TV insider told The Sun: “Holly has absolutely loved her time on the show — it’s been a huge part of her life and has really helped to expand her fanbase over the years.

“But she feels now is the right time to bow out and wants to free up a bit more of her busy schedule to spend with her family.”

In light of the reports, Holly took to Instagram and told her 6.6 million followers: “Thank you @celebjuiceofficial for 12 years of fantastic chaos… I can’t quite believe what we’ve done and how quick that time has gone.

“Thank you to you all for watching..we’ve always had the loudest and best audiences.

“Also a huge thank you to @itv2 for believing in the show in the first place and for all of your support…Over the years the production team has changed, however to anyone lucky enough to have worked on the show, they will know that we really do have the best time, it’s never felt like work and always been to me like a night out.”

The presenter continued: “Thank you for all your ingenious ideas and hard work…all good things must come to an end and nothing lasts forever…It’s time for me to hand over my team captain seat to some lucky lucky person… whoever that is, know you are about to get one of the best jobs in telly working with one of comedies finest…@keithlemon.”

Holly then ended the post by thanking Leigh and Fearne for making her experience so memorable, adding she would be returning in a guest capacity sometime in the future.

It was Holly who kept Celebrity Juice on-air as Leigh almost called time as host after their co-star decided to step down in 2018.

Speaking with Digital Spy, the comedian said: “I thought, ‘If Holly leaves because Fearne is then that really is the end, I’m not doing it without them both’.

“But then I spoke to Holly and the first thing she said was, ‘Who are we going to get then?’ I said, ‘So you’re still up for it then?’ and she said, ‘Of course!’.

According to the Keith Lemon star, the This Morning presenter admitted she thought he would be the first of the three to leave.

Taking to social media, viewers of the ITV quiz show voiced their reaction to Holly’s departure.

One wrote on Twitter: “Holly Willoughby quits celebrity juice.  Don’t see how that show can continue.

Another added on the micro-blogging site: “Ok can I cry in so sad that @hollywills has quit @CelebJuice I understand why but omg  she makes me smile on the show poor @lemontwittor if it continues what an incredible show will turn out to be unless it shelved which I hope it doesn’t.”

Whilst a third commented: “Holly Willoughby has quit Celebrity Juice,” followed by a couple of crying face emojis.

It seems there is already interest on who could be stepping in to replace Holly as a team captain, going up against Fearne’s replacement, Mel B, 44.

According to Ladbrokes bookmakers, Our Girl star and former Coronation Street actress Michelle Keegan, 32, is the frontrunner to join the show.

The actresses odds currently stand at 4/1 to replace the This Morning star, with Fearne’s chances of making a return at 5/1.

Ladbrokes spokesperson Alex Apati said: “Michelle Keegan’s no stranger to Celebrity Juice and she could soon become a permanent fixture if the latest odds are anything to go by.”

Having recently hung up her shoes on the role of Georgie Lane on BBC drama Our Girl, could she consider filling Holly’s role?