Hong Kong protests: Man set on fire by protestors as... 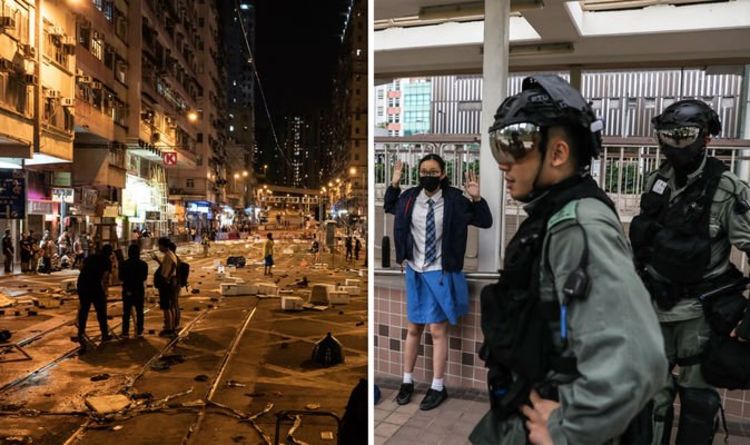 Footage in Hong Kong captured a man being doused in petrol and set alight by protestors outside Ma On Shan Plaza after shouting at them “you are not Chinese!” The most recent spat followed a day of chaos after a Facebook livestream showed images of a 21-year-old protester being shot with live rounds by a police officer.

The day materialised to be one of the most dramatic in over five months of protests.

The shooting took place in Sai Wan Ho, on eastern Hong Kong Island, where footage showed a protestor walking towards a police officer.

The police officer then grabs the protestor around the neck, swinging him around.

Nearby protestors rushed over to help, with one being shot at by a police officer and falling to the ground.

Protestors had been blocking the road in an attempt to shut down part of the city.

Footage moments later showed the man lying on the floor, blood surrounding him, with his eyes wide open.

Police can be seen attempting to put him in a sitting position, but his body flops under the officer’s arms.

The protester was rushed to hospital and was in critical condition on Monday morning.

JUST IN:Intelligence chiefs in stark warning to UK universities over

The first incident was on October 1, during China’s 70 years of communist rule celebrations.

A teenager was then shot in the leg on October 4.

The most recent clash showed an unidentified, unarmed man, shooting and swearing at protestors before being set alight.

Small clashes continued through the evening as protestors called for another round of demonstrations on Tuesday.

She said the escalating unrest was bringing Hong Kong “to the brink of no return” and that Government forces would not yield to the protesters’ demands.

She said: “If there is any wishful thinking that by escalating violence the Hong Kong government will yield to pressure to satisfy protesters’ so-called demands, I’m making this clear that will not happen.”

Tse Chun-Chung, Hong Kong’s Chief Superintendent of Police said: “We appeal to everyone to please stay calm and rational.

“Continuing this rampage is a lose-lose situation for Hong Kong – everyone is a loser.”