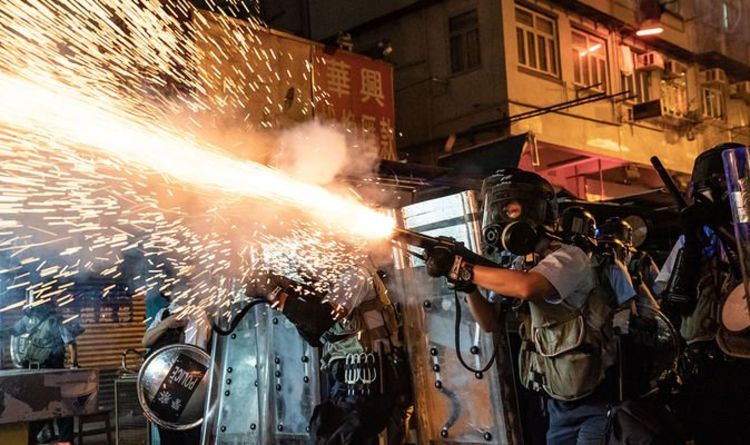 The special administrative region of China has been rocked by protests for months. The protests were originally over a controversial extradition bill that could have seen Hong Kongers extradited to Mainland China, but has since evolved to be about wider concerns about democracy in the former British colony. Speaking to the BBC’s Gabriel Gatehouse, the masked protestor explained: “I believe everyone of us is afraid of being shot by live rounds.

“If they want to fire live rounds, then they will fire it anyway.”

When asked by Mr Gatehouse about whether or not activists feared serious harm, the protestor who is believed to be a student said: “Of course we are, but we have no choice.

“We think freedom is more valuable than our lives.”

The controversial extradition bill would have allowed the Chief Executive, the head of the Hong Kong government to extradite citizens to jurisdiction where no treaty existed on a case by case basis.

Critics believed this would put the city population at the risk of political persecution from authorities in Beijing.

Protestors have called for increased democratisation as there is no universal suffrage in the election of the Chief Executive.

The committee is widely considered to be pro-Beijing.

READ MORE: ‘If the United Kingdom finishes the world will be finished’

November 24 will see elections to Hong Kong’s 18 district councils, which has seen pro-democracy activist Joshua Wong fail to have his candidature confirmed.

Mr Wong went to the office of Dorothy Ma, returning officer only to find she had taken leave, hours before a briefing session for candidates.

The 23 year old is a member of Demosisto, as is Nathan Law, who was one of several Legislative Council (LegCo) members suspended for over an oath taking controversy in 2016 when they used the ceremony to make political arguments against Beijing’s control of Hong Kong.

The LegCo has only had one election, 1995, in which all members were directly elected by one person, one vote.

Pro-democrat parties won a majority in that election, the last under British rule.

After Hong Kong returned to China the legislature was replace by the Provisional Legislative Council, which was elected by a 400 member Selection Committee.

Currently 35 seats in the LegCo are elected directly through the geographical constituencies.

The other half comes from functional constituencies, which give additional votes to members of certain industries and gives them representation in LegCo.

In order for LegCo to pass a government bill, a simple majority of the entire LegCo is required.

For private members bills, a majority of both geographical and functional constituencies separately is needed.

Speaking to express.co.uk in October, Mr Wong said: “Free elections is our ultimate goal and it’s a must of ours to elect our own government, instead of [it being] handpicked by Beijing.

“During this summer, from June to August, no-one could imagine the Hong Kong government would completely withdraw the bill but finally the government compromised and withdrew the bill which proved the power of the people.

“We will strongly feel solidarity and unity if we elected our own government, I hope that Hong Kong people can determine our own destiny, instead of our future being dominated by Beijing.”