Horror from the past 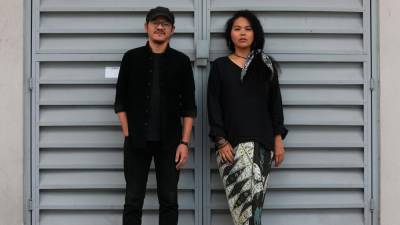 AFTER WATCHING the slow-burn horror film Roh, I was overwhelmed by a sense of helplessness. According to the filmmakers, that means they have done their job.

“There are things you cannot control in life,” says Emir Ezwan, 40, who directed and wrote the screenplay for Roh.

“Sometimes you have to ‘berserah’ (surrender to fate). The whole universe does not revolve around you.”

Made on a budget of RM360,000, the film premiered at the Singapore International Film Festival late last year, and opens in Malaysian cinemas on March 19.

The story takes place in an unspecified time, focusing on a mother and her two young children who stay in a house located in the jungle, living somewhat isolated from society.

They find a young girl roaming around their backyard, and take her into their home.

The following morning, in the most eerie manner, the young girl makes a prediction that everyone in the family will die.

After making the prediction, she slashes her own throat.

Things then get worse for the family of three. Will the prediction come true? Who will die, and who will survive?

Director Emir says: “I want my audience to feel like they are watching folklore or an urban legend.”

He felt that keeping the time period the film is set in vague would help him achieve this goal.

He says: “I want my story to feel like a myth.”

Describing his feelings after completing his first feature film, Emir, who holds a Bachelor in Computer and Electronics Engineering, says: “It is like an orchestra. You have to manage everyone. You have to depend on your team to deliver what you have in your mind.

“Directing is different from writing. When you are writing, you are alone and you do not collaborate with anyone.”

One wonders if he is happy with how Roh turned out?

Laughing, he says: “It is like having a kid. It is what it is. You have to be proud of your kid, no matter what.”

In 2016, he directed a 13-minute short film titled RM10, based on a short story by Regina Ibrahim. Done in one take, the short film focused on how a bank note is passed from one hand to another over one night in a busy bustling city.

Coming back to Roh, I find everyone delivered credible performances, especially Namron who plays a mysterious stranger who seems to be searching for something sinister in the forest. Revealing too much about his character will only spoil the fun for the audience.

The other plus point of the film is the director successfully created an atmosphere of creepiness in the film, from beginning to end.

Yet, I feel the slow pacing of the film might not sit well with the majority of Malaysian audiences, who tend to prefer that everything be presented in a fast and furious manner.

Emir has a justification for the film’s pace. He says: “Sometimes, as a filmmaker, you have to give something to your audience that they are not familiar with.”

This view is supported by leading actress Farah, who plays the mother. She believes audiences will not have any difficulty accepting the pacing of the film.

“Over time, Malaysian audiences have become more clever [and can] accept a film like Roh,” says Farah, 43, who started her career in the theatre scene before moving to the big screen.

“We are presenting a very different kind of horror,” adds Farah, who began acting way back in 1998 and has been in the entertainment industry for more than two decades.

She admits that the hardest thing she had to face during filming were the mosquitoes at the location shoot in Banting.

With a laugh, she says: “Everyone in the cast will say the same thing, and the worst is that you can never negotiate with mosquitoes to leave you alone.”

Interestingly the actress portraying her daughter in the film is also her real-life daughter, 13-year-old Mhia. This is the third time the mother-and-daughter duo have acted together.

Ironically, the first time the two acted together was in a telefilm where Farah starred as a grandmother to Mhia!

Their second joint effort was in a short film where Farah played an adopted mother to Mhia.

“I love working with my daughter,” she says.

In Roh, their characters’ relationship is very tense, and filled with hostility.

“There was a scene in the film where we have an argument and my daughter had to call me ‘bodoh’ (stupid),” she says.

“My daughter could not bring herself to call me bodoh. She even cried on the set.”

It took her some time to convince her daughter to carry out the scene, and in the end, everything worked out perfectly.