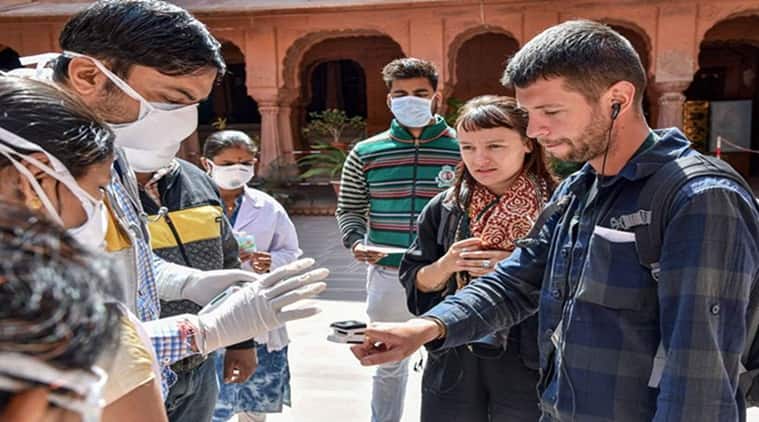 On March 11, India announced the cancelation of all existing visas issued to foreign nationals. Although visas of foreigners already in India will remain valid, the move has hampered the travel plans of many who are doing the Himalayan circuit, which also includes Nepal. (File)

On March 5, Minh Đức, a Vietnamese tourist, and his friends were on their train from Jodhpur to Jaipur when the hotel they were headed to cancelled their reservation. “I remember it could be the day when the Italian tourist group was tested positive for COVID-19 in Jaipur,” Minh said. “They said that it was due to coronavirus, no more explanation.”Minh booked another accommodation. This time, he messaged the hotel to get an assurance. “They said it was totally fine. I booked for three nights,” he added.

Upon reaching the hotel at night, they were welcomed with suspicious looks from the staff. Despite scanning their Vietnamese passport, they were asked if they were from China. “They were mumbling something in Hindi, but they talked about ‘corona’, I remember that word,” he said.

Fortunately, they could stay the night there. But the very next day, the hotel owner asked them to leave, reasoning that he had to leave the city for a few days. “That reason was totally nonsense as I still saw a westerner staying there without any actions to leave,” he added. “We were also denied breakfast.”

Minh, however, managed to book another hotel. “I love India but I didn’t think the hoteliers were happy with Asian tourists at that time. They didn’t seem hospitable,” he said.

A Filipino, Reina Flaviano, also faced a similar situation in Udaipur. “Fear is spreading faster than the coronavirus. It is understandable as a guesthouse owner to put restrictions for safety, however, is there any rational basis for this? To discriminate someone because of appearance and even nationality would be very unfair,” she said. “We’re confused where to go next because we’re not sure if guesthouses would accept us.”

Asians are not the only ones experiencing this kind of behaviour in India. Kira Frampton, a US tourist, who otherwise enjoyed her trip here, noticed how the behaviour of local towards foreigners started changing as her tour progressed. “While we initially enjoyed an incredibly warm welcome from Indians (including our immigration officer in Delhi who encouraged us to stay the entirety of our six-month visa), today we experienced a drastic change. I feel like this is likely due to the recent uptick of cases in the US and Europe. The normal inquisitive stares are starting to feel hostile,” she said, narrating an incident at a South Delhi restaurant. “While eating our meal, a local family came in and upon seeing us, started pointing and debating. Though they were speaking Hindi, I recognized the word ‘coronavirus’ mentioned a few times on the way to their table, they were all holding their noses with napkins and pointedly leered at us. They then proceeded to ask the waiter to open all doors and windows of the restaurant. For the remainder of our time there, they simply stared at us with tissues still pressed to their faces. We were so uncomfortable, we had to leave early,” she said.

Read| An Expert Explains: ‘No data to suggest that transmission will slow as summer approaches’

In some instances, things reached a point that even the police had to be called in. “A few German guests at our hostel had the police called on them for walking down the street. The locals who called insisted they be tested for corona,” she said. “We have loved our short time in India but are making the difficult decision to leave. We have booked a flight to the UK to stay with my husband’s parents.”

As airlines are cancelling overseas flights over travel curbs, many international tourists are rushing to get back home. “We were supposed to stay in India till March 26 and then travel to Vietnam or Thailand till May. But due to the coronavirus situation, we booked a flight to Portugal on Wednesday,” said Mafalda Hipólito, a Portuguese tourist. “Situation there is worse than India. But things in India will get worse too, so we prefer to be at home,” she added.

On the other side, there are tourists who have decided to stay put. “We don’t want to go anywhere near an airport or anything like that,” said Erin and Jan, a US couple, who are currently witnessing a shutdown in Mysore. “We are thinking of maybe going to Goa to find a quiet place on a beach with very few people and just wait for everything to calm down.”

On March 11, India announced the cancelation of all existing visas issued to foreign nationals. Although visas of foreigners already in India will remain valid, the move has hampered the travel plans of many who are doing the Himalayan circuit, which also includes Nepal.

“We crossed to Nepal on March 7, for a three-week hiking trip, after which we had to return to India. During a lunch break, we got to know that borders are slowly closing down, which took us by surprise. We descended that very day, got a jeep taxi out of the hiking area and wanted to take another taxi to the Indian border instantly. But shortly after we realised it‘s too late and the border had closed already at midnight that day. Now we are kind of trapped in Nepal. Which is a beautiful place to get stuck in, I guess?” said El Que Atonal, another foreign tourist.” To lose the freedom of roaming freely overnight still feels scary to me.”

Scott Hannah, a Brit, was turned away from two hostels in Gokarna. They demanded a medical certificate to say he was clear of the coronavirus. “I understand they did this to protect everyone. It only took one hour to get the certificate,” he said.

But the medical clearance didn’t come so easily to all tourists.

A European tourist, who spoke on the condition of anonymity, still hasn’t received her test reports from Delhi’s Ram Manohar Lohiya Hospital after eight days of being tested. “We came back from Thailand and Malaysia. As I was feeling sick, we dialed the coronavirus helpline and they asked us to visit the hospital,” she said.

“When we reached there, we found that the doctors decide if you will be tested or not. If you did not have fever, they refused to test. But I knew that virus can be transmitted even before you start showing symptoms. A sick Korean couple was denied the test. It was only after much argument that they were tested,” she added.

“I was startled to see that the testing was happening on the same floor where others were hospitalised. The doctors came after a long wait and took our samples. We were asked if we want to stay in the hospital or be isolated at home. I did not want to be in a hospital where patients were not segregated. They said it will take maximum three days for results to come and I left,” she added.

“In addition, the doctors prescribed us antibiotics, which makes no sense for a virus,” she said. “The hospital kept postponing our test results and we haven’t received it after eight days. I am afraid, how can they expect a potential COVID-19 positive case to travel to hospital and put so many people in risk. Meanwhile, I am not travelling as it will be irresponsible on my part and I’d require a medical clearance for going anywhere which I don’t have as I am still waiting for my results.”

? The Indian Express is now on Telegram. Click here to join our channel (@indianexpress) and stay updated with the latest headlines

ByThough holidays have been on hold for some time, the end of the current lockdown on December 2 and the reintroduction of the tier...
Read more