House Hunting in Croatia: A Modern Mountain Villa for $1.2 Million 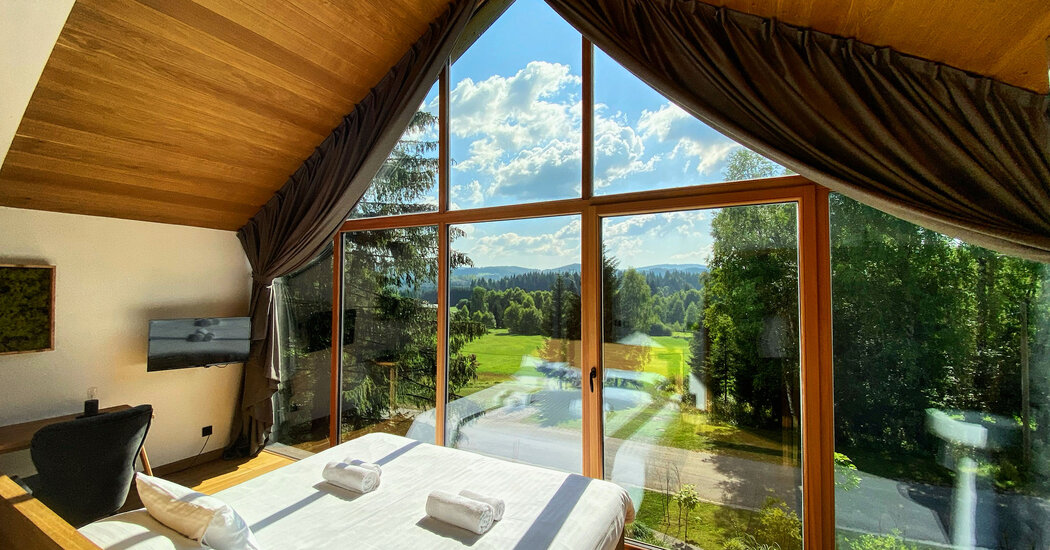 An Eco-Friendly Three-Bedroom Villa in Croatia

This three-bedroom vacation home sits in the heart of Croatia’s mountainous Gorski Kotar region, a northwestern pocket of the country — known as the “green lungs” of Croatia — that stretches down to the Adriatic Sea.

Completed in 2019, the three-story house sits on a sloped quarter-acre lot and features the traditional wood construction often found in Gorski Kotar, which is known for its woodworking. The primary materials are locally sourced Siberian larch and iron, in keeping with the owner’s wish that the 2,368-square-foot house be constructed with sustainable materials by local laborers. Even the furniture and shelving were made by local craftsmen from solid wood. The exterior cladding is meant to shield the home from harsh Croatian winters.

“My guiding idea was longevity and resistance to the extreme weather conditions, because it’s Gorski Kotar after all,” said the owner, who asked not to be named for privacy reasons. “But I wanted it to be as natural as possible, with as few chemicals as possible, so that it blends into the pristine nature of the area.”

Designed with a minimalist Scandinavian aesthetic, the house features moss-covered cladding and floor-to-ceiling reflective glass windows that open the main living areas to views of the mountains. “It’s truly a Croatian product,” said Mirjana Micetic, a broker with Croatia Sotheby’s International Realty who has the listing.

Entering through the lower-level two-car garage, the basement has an entertainment lounge, sauna, bathroom and a wine cellar designed in the style of a Croatian tavern, Ms. Micetic said.

A pathway ascends from the driveway past a landscaped garden to the main entrance. On the ground floor, an iron fireplace separates the kitchen from the living room, which has wall-to-wall windows and a door that opens to the platform deck, heated pool and spa. The kitchen, also accessible through glass doors on the side of the house, has a table that seats 10.

The second floor, which cantilevers slightly over the deck, has three bedrooms with en suite bathrooms, the largest of which looks out to the forest through a wall of windows. A fire pit, barbecue, open dining area and garden are in the backyard.

The property is in the village of Ravna Gora, which sits between the larger towns of Delnice and Vrbovsko. Risnjak National Park is about 30 minutes away; Plitvice Lakes National Park, a UNESCO World Heritage Site and a popular hiking destination, is within an hour and half. Rijeka, a port city about 45 minutes west, is a melting pot of European influences with a growing tourism scene and an international airport. Zagreb, the Croatian capital, is about an hour northeast.

Croatia was one of a few European countries to react quickly to the coronavirus, ordering a full quarantine in mid-March that successfully tamped down the spread of the virus. The lockdown was lifted in May, and in June a flood of tourists and buyers poured into the country, setting off a second wave of infections that has continued into the fall. As of Oct. 13, Croatia had reported 20,993 Covid-19 cases and 330 deaths, according to the New York Times’s coronavirus map.

Through it all, the country’s real estate industry — which had enjoyed several years of steady growth — has managed to remain upright. “The market never actually died,” Ms. Micetic said. “My feeling is that it was pushed back by two to three months.” She said she conducted virtual showings with potential buyers throughout the lockdown, while those who were planning to come in the spring rescheduled for July, August and September.

Elena Nevskaya, a lead consultant with Adrionika Consultancy and Coordination, said that tourism most often generates requests for properties along Croatia’s Adriatic coastline. There were twice as many requests from foreign nationals in May and June compared with the same period in 2019, according to a report from Adrionika. Many were for stand-alone villas with pools on the Istrian Peninsula for about 300,000 to 350,000 euros ($ 355,000 to $ 415,000), and seafront villas in Dalmatia for about 1.5 million to 2 million euros ($ 1.8 million to $ 2.4 million). (Croatia operates on the kuna, though many transactions are conducted in euros.)

Ms. Nevskaya said that the onset of the pandemic, along with the effects of an earthquake that struck Zagreb on March 22, caused a dip in prices nationwide, helped along by low home-loan interest rates, now at around 2.5 percent.

But the latest quarterly report from the Croatian Bureau of Statistics found that home prices increased by 8 percent compared with the second quarter of 2019, including a 9 percent increase in Zagreb. The earthquake, which damaged many homes in the city center, reduced inventory and shifted the focus for some prospective buyers.

“We’ve noticed a spike in the number of people looking for houses and building plots compared to flats,” said Boro Vujovic, director of Zagreb-based agency Opereta and vice president of the Real Estate Brokerage Business Association in the Croatian Chamber of Commerce. “Both the coronavirus and the earthquake made it so that people feel better on the ground level, with a piece of their own land.”

In the luxury market, Ms. Micetic said Sotheby’s has seen a slight dip in foreign interest over the past seven months, since people couldn’t visit homes in the spring. But there’s a niche clientele that never dries up. From January to September of this year, the company listed 69 properties and 11 sold, up from 61 properties listed and eight sales during the same period in 2019.

Mr. Vujovic said the pandemic has boosted activity for vacation homes and agricultural land in the region, with clients seeking its clean air and water, as well as its proximity to Zagreb and the coast. “After the pandemic,” he said, “the value of isolation, nature and peace has grown considerably.”

Who Buys in Croatia

According to a Sotheby’s report, foreign buyers make up roughly 15 percent of the real estate transactions in normal years, with Slovenians usually topping the list, given the shared border with Croatia.

Ms. Micetic said this year she’s seen requests from Austrian, Slovenian and German buyers. So has Peter Ellis, the director of Croatian Property Services, who saw increased attention from Germans on the Istrian Peninsula, where buyers may be looking for second homes by the sea.

Croatia, which joined the European Union in 2013, gives European citizens easier access to its real estate through a reciprocity law allowing Europeans to buy property without restrictions as long as Croatians have the same right in the buyer’s home country.

More than half of the states in the U.S. have reciprocity with Croatia as well, including New York, New Jersey, Connecticut, Massachusetts and California.

Non-European citizens must gain approval from the Ministry of Justice of the Republic of Croatia in order to purchase property. From there, a buyer will want to find a Croatian lawyer — usually in-house at the brokerage — to conduct the closing. Once an offer has been accepted, buyers will pay around 7 percent of the home’s total cost in taxes and fees, which include what’s owed to the broker and legal counsel, as well as the property transfer tax.

There is no annual property tax in Croatia if the home is used as a primary residence, Ms. Micetic said.