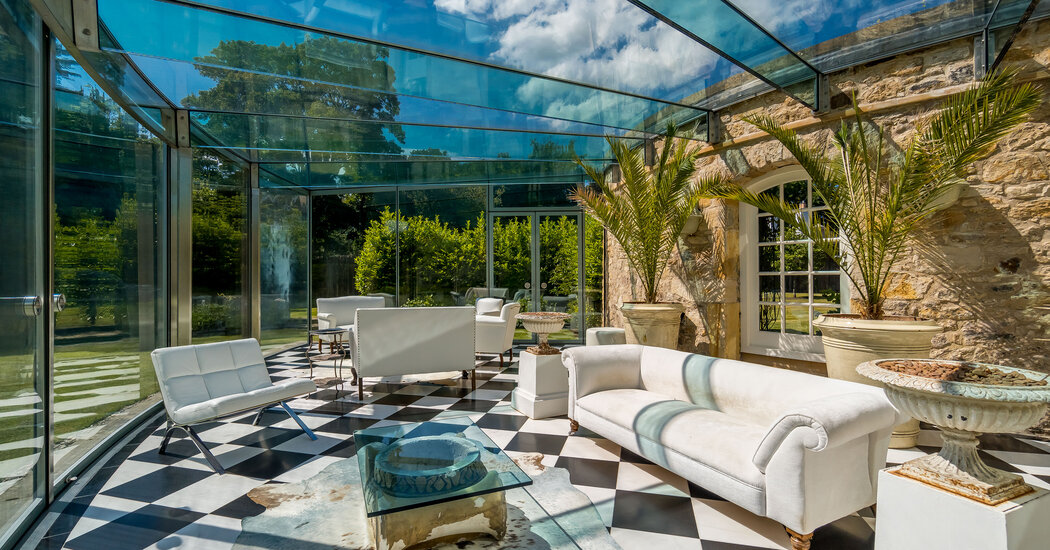 A Three-Bedroom House With Modern Embellishments

This three-bedroom home is nestled in the center of Pencaitland, a village about 12 miles east of Edinburgh, the Scottish capital. Originally the south wing of a 17th-century mansion house on a vast estate, the 3,395-square-foot house now occupies a 1.35-acre lot and was fully renovated by the current owners in 2005, said Jamie Macnab, director of country house sales at Savills, which has the listing.

The renovation included the conversion of a former brew house and ice house on the property into entertainment spaces, and the addition of two glassed-in garden rooms.

The property’s original front gates open onto a tree-lined gravel drive that leads to a parking area. The main entrance opens directly into the combined kitchen, living and dining space, a configuration the owners created by removing some of the building’s original interior walls, Mr. Macnab said.

The space has wide-plank oak flooring with radiant heat. A fireplace with a cast-iron surround is at one end of the room, and a four-burner AGA oven and a small island are at the other, with the dining area in between. Marble-topped cabinetry, with two farm sinks and two dishwashers, runs the length of one wall.

Off the living area is the more formal drawing room, with another fireplace and three sets of arched, Palladian-style glass doors. The doors open onto the property’s circular courtyard, arranged around a fountain created from an enormous cast-iron bowl.

A glass-walled garden room extends from the drawing room in a sweeping curve, providing views of the landscaped grounds. It has a back wall of stone, and black-and-white Italian tile flooring with radiant heat.

A spiral stone staircase leads to two bedrooms on the second floor. The primary bedroom has a gas fireplace, hand-printed wall coverings and a free-standing bathtub facing the windows. The adjoining bath has a dressing room, mirror-fronted wardrobes, Italian tile floors and a marble-topped vanity with three sinks.

The second bedroom also has a gas fireplace and an en suite bath. A third bedroom on the attic floor has exposed wood beams and a bathroom.

Across the courtyard, the long, narrow brew house is connected to a round ice house by a second garden-room extension. All three spaces can be opened to a spacious stone patio. The brew house, currently set up with several seating areas, has vaulted ceilings with exposed beams, and black slate floors with radiant heat. The ice house has exposed stone walls and a glass roof.

The property is on the edge of the expansive grounds of Winton Castle, the heart of the original estate and now a venue for weddings and conferences. Across the street is Pencaitland Parish Church, the oldest portions of which date to the 13th century.

The town of Haddington, about 10 minutes away, has a variety of shops and restaurants. Edinburgh Airport is about 30 minutes away.

The housing market in greater Edinburgh was strong before the pandemic shutdown, and since Scotland eased its restrictions in late June, it has come roaring back, agents said.

The city of roughly 500,000 is in the midst of a redevelopment boom, including a 1 billion-pound, 1.7 million-square-foot retail and residential center known as St. James Quarter, and a planned 1.3 billion-pound remaking of the Granton Waterfront into a sustainable community with housing, commercial space and a park.

“The regeneration we’re seeing is like nothing we’ve seen in a generation,” said Ben Fox, Savill’s head of Edinburgh residential sales.

Prices in prime sections of the city have risen 26.5 percent over the past five years, according to data provided by Savills. As of the end of the third quarter this year, prices in the city were still up 3.5 percent over the same period in 2019, despite the halt in activity during the shutdown. Across Scotland, the average price for a home rose 0.4 percent from July 2019 to July 2020, to 155,000 pounds ($ 200,000), according to the Office of National Statistics, though that was down from 3.2 percent over the year to June 2020.

Mr. Fox attributed the price strength to the surge in post-lockdown demand coupled with low inventory. However, supply has increased significantly since August, as sellers seek to take advantage of the fast-paced market, such that “in some parts of the market there has been a tipping of the balance to touching on an oversupply,” he said.

In July and August, after coronavirus restrictions were eased, Knight Frank saw a nearly 200 percent increase (over its five-year average) in the number of people registering with the agency to view properties, said Edward Douglas-Home, head of Scotland residential for Knight Frank. “The three months after lockdown ended in late June were like nothing I’ve ever experienced — it was just extraordinary,” he said. “My team basically did six months’ work in three months, in terms of revenue.”

As of Oct. 19, Scotland, with a population of 5.4 million, had 49,164 reported cases of Covid-19 and 2,625 deaths, according to Public Health Scotland. The Scottish government recently ordered the closure of pubs and restaurants in central Scotland (including Edinburgh) until Oct. 25, hoping to reverse an upward trend in cases.

Knight Frank’s average sale price for the mid- to high-end of the Edinburgh market is currently about 700,000 pounds ($ 907,000), Mr. Douglas-Home said. That would buy a two- or three-bedroom flat in the city center, or a three-bedroom house with a small garden about 10 minutes outside the city, he said.

Edinburgh’s leafy inner suburbs, including Inverleith, Trinity, Morningside and Grange, have seen a particular spike in buyer interest in recent months, Mr. Fox said, “driven by remote workers, and the need for more space, bigger gardens and an extra room for an office.”

The market for country houses outside Edinburgh, which has lagged behind the city since the 2009 recession, is benefiting from the same buyer reorientation, according to Mr. Macnab: “Now, country houses are being seen as a good value, and there’s been a bit of a renaissance in that market in the last three months.”

The city itself has seen an influx of buyers from London who are now able to work remotely. Edinburgh is more affordable, as well as “very manageable and walkable,” such that most residents can get around easily and avoid the risk of sharing public transit, Mr. Douglas-Home said.

Who Buys in Scotland

About 30 to 40 percent of buyers in and around Edinburgh come from outside Scotland, mostly from elsewhere in the United Kingdom, Mr. Douglas-Homes said.

The roughly 10 percent who are international buyers typically come from Europe, the U.S., China and Hong Kong, agents said.

However, the travel restrictions in place because of Covid-19 have lately reduced the number of international buyers, especially those looking at the top of the price range. “The local market works well up to 1.5 million pounds ($ 1.9 million),” Mr. Macnab said. “Once you’re above that, we more often look for buyers from further afield.”

There are no restrictions on foreigners buying residential property in Scotland. Real estate agents represent sellers. It is rare for a buyer to have their own agent — most act for themselves in going around looking at properties, Mr. Macnab said.

Buyers must hire a lawyer to draw up and submit a purchase offer, negotiate the contract, and handle the transaction.

Sellers pay the agent’s commission of 1 to 2 percent.

In July, in an effort to stimulate the housing market, the government raised the threshold for the Land and Buildings Transaction Tax from any portion of a sale over 145,000 pounds to over 250,000 pounds ($ 325,000). The change is in effect through March 2021.