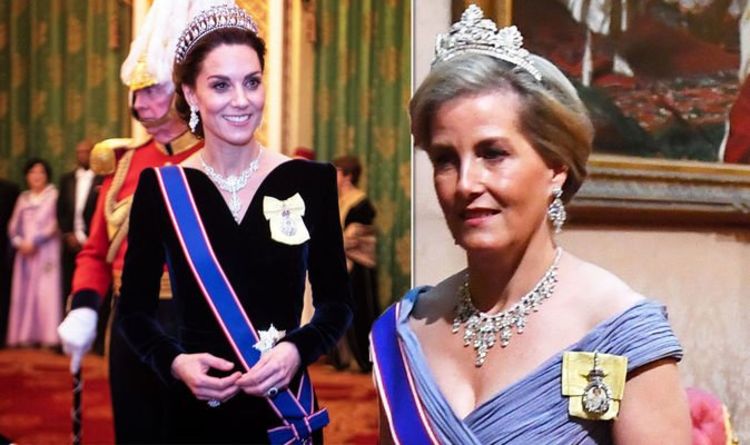 Sophie Countess of Wessex was given a tiara by the Queen for her wedding day.

It is believed the design was commissioned specially for her by the Queen.

The unique diamond design consisted of three peaks and was made from jewels from the royal collection.

Eddie LeVian, CEO of jewellery Le Vian, told Express.co.uk: “If you look closely, the tiara is composed of four anthemion elements – these are sections composed of twisting diamond floral motifs, set on a gold frame.”

A look at the wedding tiaras worn by recent royal brides

While royal brides tend to either wear a brand new piece or a wear an heirloom piece, Sophie, Countess of Wessex wore a combination of the two.

The exact name of the tiara is unknown.

The Countess has worn the piece of jewellery a number of times since her wedding day – such as to the nuptials of Crown Prince Frederik of Denmark and Crown Princess Mary of Denmark.

Sarah Ferguson tied the knot with Prince Andrew at Westminster Abbey in July 1986.

Sarah Ferguson also wore a previously unseen wedding tiara, with the jewellery having been made especially for her.

Princess Diana was known as Lady Diana Spencer before marrying Prince Charles back in 1981.

The royals tied the knot at St Paul’s Cathedral.

The late princess opted for her own family diamonds for the occasion, wearing the Spencer Tiara.

Meghan Markle, the Duchess of Sussex, wore the Queen Mary Bandeau Tiara for her and Prince Harry’s big day.

The former Suits actor tied the knot with the prince in May 2018, at St George’s Chapel, Windsor Castle.

The jewels hadn’t been worn for 65 years prior to the special event, having previously been well-loved and worn by Queen Mary, the grandmother of Queen Elizabeth II.

Kate Middleton and Prince William wed at Westminster Abbey, London, back in 2011.

The Duchess of Cambridge arrived at the church in the Cartier Halo Tiara.

It is set with more than 1000 diamonds, and crafted as a band of “16 graduated scrolls”, the Royal Collection Trust have said.