How Man Utd may line up under Solskjaer in five years – with Sancho, Mejbri and Greenwood 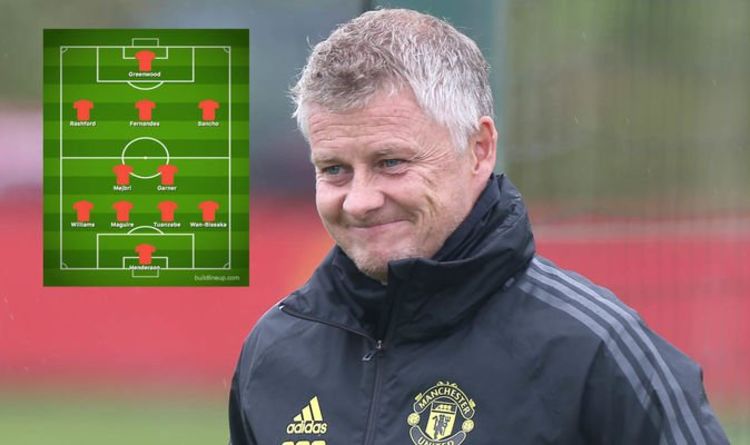 It’s time to get the crystal ball out. Manchester United have one of the youngest squads in the Premier League and Ole Gunnar Solskjaer is keen to continue giving youth a chance. So Express Sport will now predict – and we’re putting our necks on the line now – how the Red Devils could look in five years time.

In five years time David De Gea will be 34.

There are already suggestions the Manchester United star is on the wane but, in Dean Henderson, the club feel they’ve got the perfect replacement on their books.

The youngster could even be made No 1 next term if De Gea continues to struggle, although another loan spell away from Old Trafford appears likely.

United hope to tie Henderson down to a new contract because they feel he’s just going to get better and better with time.

And the shot-stopper will likely be hitting his prime in 2025 – if he continues to develop the way he has been.

In James Garner, United believe they have another Michael Carrick on their hands.

He has flourished at youth level in recent years and Fred has already expressed a belief that he’s got a bright career ahead of him.

United paid £9million to sign Hannibal Mejbri from Monaco in the summer and he’s shone at youth level. Had it not been for the arrival of Bruno Fernandes, he could even have been fast-tracked this season.

And Fernandes will likely still be here in five years time, too.

The Portugal international will be 30 in 2025 but Solskjaer thinks he can be the club’s playmaker in the future – as well as the present.

United love having home-grown players in their starting XI. It’s part of the club’s tradition and goes back to the Sit Matt Busby era.

And, in Mason Greenwood and Marcus Rashford, they have two gems.

United feel Rashford can be a Ballon d’Or winner if he continues to develop, with the England international scoring 20 goals across all competitions this season.

And they think Greenwood has frightening potential, with Solskjaer already dubbing him ‘one of the best’ finishers he’s ever seen.

That’s before we even get to Jadon Sancho. United want to sign him this summer – and that’s expected to happen, too.

However, tourism chiefs in Spain are calling for the quarantine regulations to be lifted and replaced with compulsory coronavirus tests before travellers leave their...
Read more