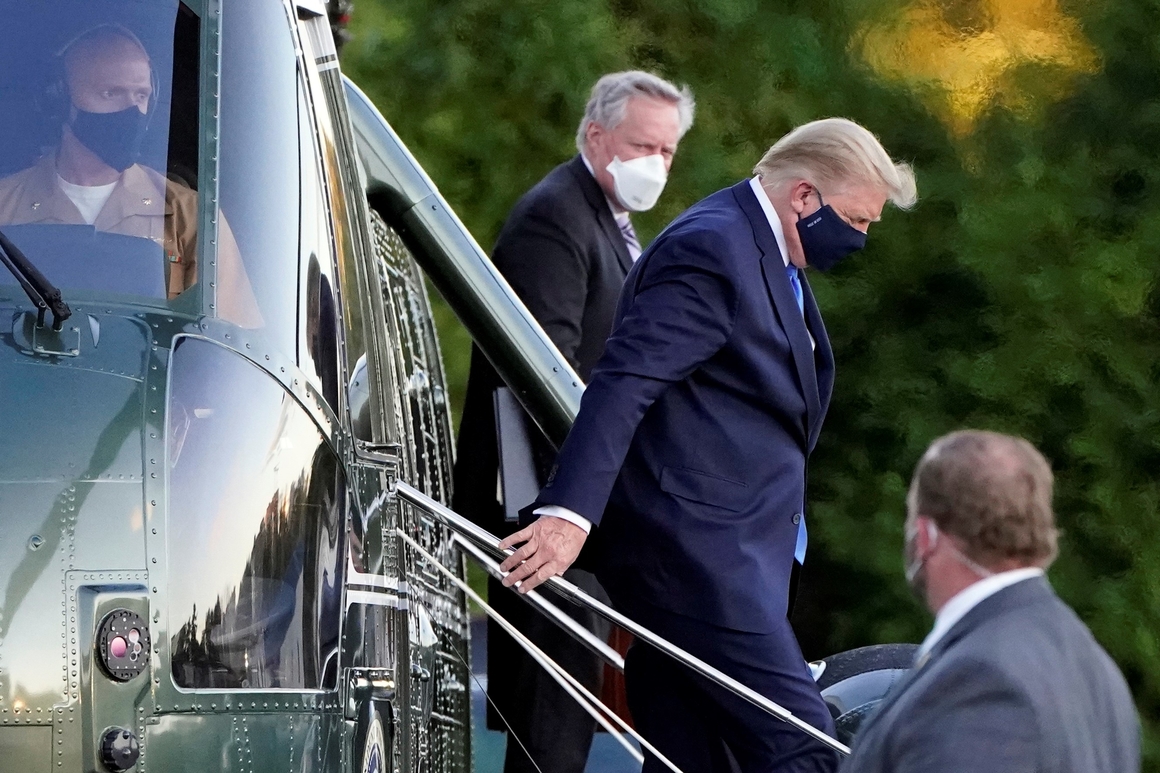 That’s one diagnosis of Meadows—and trust me, there are plenty to go around in Washington. Friends would describe him as a respectable player—calculating and slippery but decent to a fault. Enemies would liken him to a political sociopath, someone whose charm and affability conceal an unemotional capacity for deception. What both groups would agree upon is that Meadows, the 61-year-old White House chief of staff, is so consumed with his cloak-and-dagger, three-dimensional-chess approach to Washington that he can’t always be trusted.

Which makes him precisely the wrong person to be at the center of an international crisis.

It was unsettling enough on Saturday morning to hear President Trump’s personal physician, Sean Conley, evading questions from the media during a news conference outside Walter Reed Medical Center. Tasked with giving an update on Trump’s bout with Covid-19, Conley wouldn’t say definitively whether the president had ever been given supplemental oxygen; what his temperature was; whether any lung damage had been detected. Making matters worse, the timeline he provided of Trump’s illness was wrong; he was forced to correct it after the briefing. Still, the big takeaway was that Trump was doing “very well,” that doctors were “extremely happy” with his condition, that the move to Walter Reed was nothing more than a “precautionary measure.”

Incredibly, just minutes after that briefing, the traveling press pool blasted out a statement provided by “a source familiar with the president’s health.” The anonymous quote hinted at something far bleaker than what the 10-member team of medical professionals had just offered: “The president’s vitals over the last 24 hours were very concerning and the next 48 hours will be critical in terms of his care. We’re still not on a clear path to a full recovery.”

It became immediately obvious that Meadows was the source; he was the only White House official at Walter Reed, the only person who could have so promptly briefed the pool on the president’s condition. (Sure enough, footage quickly surfaced showing Meadows pulling the reporters to the side, asking to speak “off the record with some of y’all” for a minute.)

What wasn’t clear—and still isn’t clear—is why Meadows said what he said. (I tried to get him to explain but he did not respond to messages seeking comment.)

Here again, there are competing theories among people who know him. One is that Meadows was concerned that Americans weren’t getting the full picture on the president’s health and wanted to offer a more realistic assessment. Another is that Meadows, a lover of political drama, wanted to seed a narrative of the president on the ropes and fighting for his life, setting up the storyline of a triumphant comeback. In reality, the likeliest explanation is that Meadows, having watched the doctors shed little light on Trump’s situation, tried to be helpful by providing some needed context to reporters, but overstepped with his melodramatic wording.

Whatever the case, Meadows erred not only by stepping on the doctors’ statement with his own, but by doing so anonymously, piling enormous confusion on top of an already chaotic moment. That the reporters in the pool agreed to the chief’s ground rules at such a critical time, on such a sensitive subject matter, is bad enough; what’s unfathomable is the top staffer at a White House that regularly disparages anonymous sourcing as “Fake News“ requesting the cover of background to deliver news the entire world was waiting on.

Meadows refused to confirm that he was, in fact, the anonymous source. That didn’t stop several outlets, including the Associated Press and the New York Times, from attributing the quote to him based on their reporters’ knowledge of events. What came next, however, was all the more bizarre: Meadows told Reuters, late on Saturday afternoon, “The president is doing very well. He is up and about and asking for documents to review. The doctors are very pleased with his vital signs. I have met with him on multiple occasions today on a variety of issues.”

To recap: Meadows went on the record with Reuters to contradict what he told other reporters on the condition of anonymity earlier in the day—comments that contradicted what the president’s own doctor had broadcasted to the public after 18 hours without official word on the president’s medical condition.

The most powerful nation on earth, with the eyes of the world fixed upon it, could not get her story straight.

The Trump administration has faced a crisis of credibility since day one. It has peddled lies and misinformation about everything from inauguration crowd sizes to Amy Coney Barrett being a Rhodes Scholar. But nothing could be as consequentially incompetent as providing mixed messages regarding the president’s health while he is hospitalized with a potentially life-threatening illness. And the weight of responsibility does not fall on Trump. It’s not the fault of the White House communications shop or the White House press secretary, Kayleigh McEnany. The blame belongs to Meadows.

Nobody could have predicted, when the chief of staff took over in March, that his own personal track record of unreliability would intersect so serendipitously with the Trump administration’s inability to shoot straight. But it’s not exactly surprising, either. The combination of Trump and Meadows—a pair of known embellishers, two men who fancy themselves expert negotiators but have never sealed a major deal in Washington—struck some people in the capital city as a disaster waiting to happen. When Meadows moved into his new role, one of his former allies in the House Freedom Caucus, a personal friend, told me his biggest concern wasn’t whether Meadows would hold Trump accountable; rather, it was whether anyone in the administration would hold Meadows accountable, reining in his constant freelancing and inflated sense of himself as an operator.

There was ample justification for such concern. Many was the meeting of the House Freedom Caucus from which members walked away uncertain if what Meadows was telling them matched what he was telling reporters in background conversations, or what he was telling House GOP leadership in their private meetings. For his part, Paul Ryan, who clashed repeatedly with the Freedom Caucus during his time as Speaker, developed a unified theory of how to deal with the group. Of its co-leaders, Meadows and Jim Jordan, Ryan believed he could deal with Jordan; strident and hard as the Ohio congressman was, Ryan always felt their communication was straightforward. Meadows, on the other hand, was always up to something, always playing the angles, always dealing in smoke and mirrors.

Meadows earned every inch of this reputation over his seven years in Congress. Whether it was spearheading the doomed effort to defund Obamacare in the House, or forming the House Freedom Caucus, or breaking with his comrades to light the spark that led to Boehner’s eventual resignation, Meadows has a nose for opportunity and a bottomless appetite for fame. (In my book, American Carnage, I wrote that Meadows is the only politician I’ve encountered who stacks up to a real-life version of Frank Underwood, the cunning main character in the show “House of Cards.”)

Once, in 2015, Meadows pulled aside his North Carolina colleague, Mark Walker, on the House floor. A former minister, Walker was new to Congress and eager for guidance. “You voted the wrong way,” Meadows told him about a bill up for consideration. Walker was perplexed; he had sided with Heritage Action, the arch-conservative group. And yet Meadows, a known ringleader of the right, was voting the opposite way. After some persuasion, Walker changed his vote. He later found out that he’d been duped: Meadows had personal reasons to vote against Heritage on the bill, but he didn’t want his colleague earning a better grade on the group’s scorecard, so he made sure Walker earned a demerit with him. Their relationship never recovered.

The best example of Meadows’ expedient worldview draws from his relationship with Trump. Back in 2016, when the reality TV star was closing in on the Republican nomination for president, Meadows told anyone who would listen that Trump constituted a threat not just to the GOP but to America and the Constitution itself. In the weeks leading up to the party convention, he repeatedly declared to his Freedom Caucus colleagues that he might not travel to Cleveland for the affair, despite being a delegate, because he feared living with the legacy of having voted to nominate Trump. Soon after going to Cleveland, however, and taking that vote, he got to know the nominee when Trump visited North Carolina. Before long Meadows was a fixture on the Trump campaign plane; he would often hold up his cell phone around friends to show them when Trump was phoning him.

Just before that 2016 convention, I sat in Meadows’ office on Capitol Hill, talking with him about the Republican Party and its new leader. The congressman was measured in his critiques. He admitted that Trump wasn’t his first choice—or even close to it. But, he added, there was something strangely endearing about the man.

“You know the funny thing? Donald Trump is actually a lot like me,” Meadows said. “He’s going to tell you the truth, whether you like it or not.”