How one Dem governor stays off Trump’s enemies list 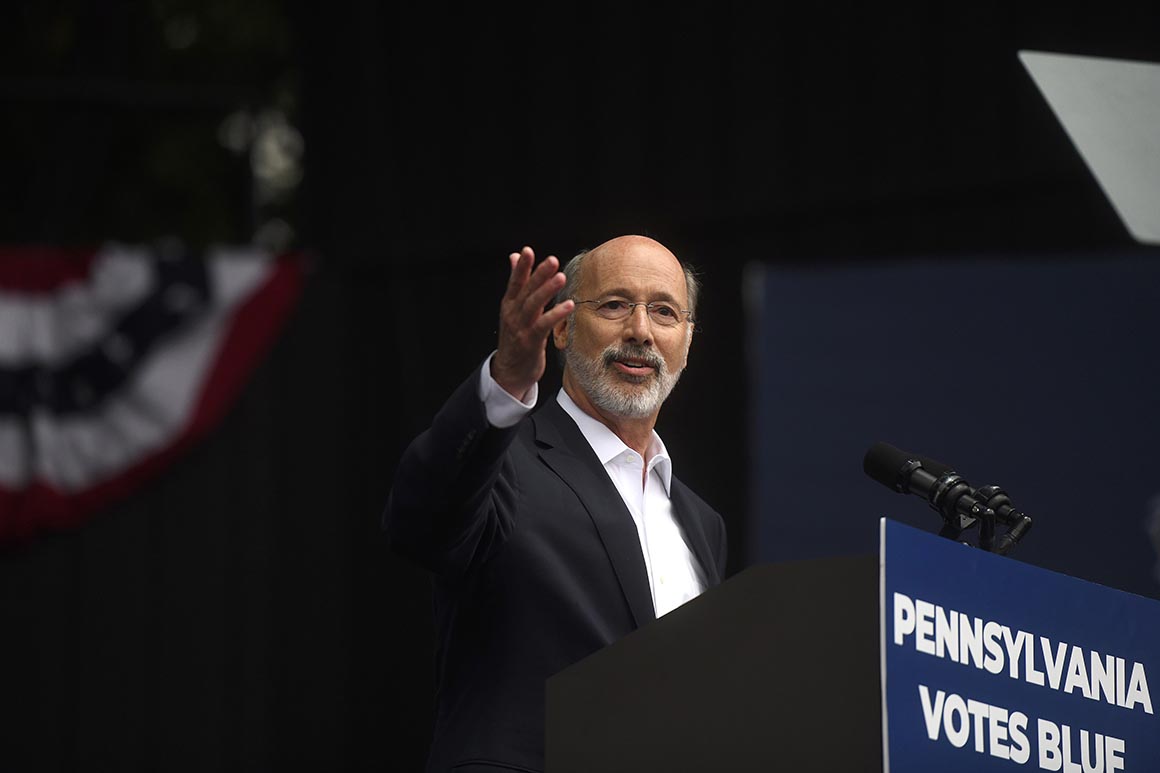 PHILADELPHIA — Across the country, Democratic governors battling coronavirus have bashed President Donald Trump for botching the federal response, upstaged him on television, and even trolled him by proudly reappropriating his derogatory nicknames.

In Pennsylvania, Gov. Tom Wolf is following a different approach.

“They’ve done pretty well,” Wolf said in an interview with POLITICO. “We needed additional N95 masks and I had a couple conversations with the vice president and he actually made it happen.”

It’s a leadership model that has left some Democrats quietly wishing he were a more prominent figure — and a more critical voice — during the crisis. But as the governor of a big battleground state that Trump carried in 2016, Wolf isn’t afforded the same luxuries as his blue-state colleagues.

“Pennsylvania is a different state than New York,” said J.J. Abbott, a former aide to Wolf. “I think he knows in a crisis, he needs credibility and trust with people who don’t necessarily support him or didn’t vote for him or support the president. His focus has clearly been, ‘How do I get everyone, no matter where they fall on the ideological spectrum, to buy into the only strategy we have at this point, which is social distancing?’”

That outlook makes him an outlier compared to many other Democratic governors. Michigan Gov. Gretchen Whitmer recently wore a T-shirt on "The Daily Show with Trevor Noah" that read “That Woman from Michigan,” poking fun at Trump’s diss of her. On “Meet the Press,” Washington Gov. Jay Inslee quipped, “Can you imagine if Franklin Delano Roosevelt said, ‘I’ll be right behind you, Connecticut. Good luck building those battleships?’” On Tuesday, Cuomo said of Trump’s assertion of “total" authority, “We don’t have a king in this country.”

Wolf, on the other hand, ended up on cable news for live interviews twice during the pandemic, once for a somewhat impromptu reason, said his staff: It was because he was doing an event with Cuomo. His only other big interviews outside the state have been with the Financial Times, NPR, AP and the Washington Post, according to an aide. His team said he never holds information, such as a decision to expand his shut-down order, for news conferences.

“He doesn’t want to get in the way of major announcements,” said a top staffer.

Wolf’s allies said his keep-his-head-down approach speaks for itself: He acted faster than Cuomo and New Jersey Gov. Phil Murphy to issue an emergency declaration, close schools, and shut down businesses since the states’ first confirmed cases. Despite its proximity to hot spots such as New Jersey and New York, Pennsylvania ranks 10th in the country in cases per capita. They also argued that a diplomatic style is necessary while working with a vindictive president.

Some Pennsylvania Democrats would prefer less caution and reserve from the governor, and more command of the stage. “The thing that people need right now is somebody to tell them everything’s going to be OK,” said one Democratic elected official who declined to be named.

But it’s not Wolf’s style to be a showboat, even when it comes to grappling with a polarizing president who is deeply unpopular in parts of the state, said people close to him. Wolf had never been elected to office before winning the gubernatorial race as an outsider businessman in 2014.

“There are different ways to do it. Being on TV every day maybe works for Andrew Cuomo, but I think Tom Wolf’s had the same results, maybe even more effective results,” said former Gov. Ed Rendell, who previously tapped Wolf to be his revenue secretary. “People have responded to him because they don’t think he’s political. They think he’s honest.”

Said U.S. Rep. Dwight Evans, a Philadelphia Democrat and top Wolf ally: “When you think about it, he’s not a politician. When he came into office, he said his leadership would be somewhat different, and that’s what he’s tried to do.”

Wolf’s allies said his approach also reflects the fact that he needs to persuade residents in a swing state, which Trump won in 2016, to sacrifice for the larger good and stay in their homes. That requires a different tone than that of blue-state governors, they said.

And Democrats said Wolf has to contend with the fact that Trump has shown a willingness to punish governors who criticize him. If he were governor, Rendell said, he would criticize the federal government’s performance if it deserved it, but not go after Trump on a personal level.

“I wouldn’t attack the president by name,” said Rendell. “There’s a time for that. But right now your responsibility, as a smart public servant, is to do what’s best to protect the people of your state. Trump is clearly a guy who if you compliment him, he compliments you and gives you what you want. If you spar with him and attack him, you’re putting yourself in not as good a position.”

At the same time, Trump has an incentive to play nice with Pennsylvania, at least in theory. The state was key to his election in 2016 and will again be a critical swing state in 2020.

Wolf’s attempts to be diplomatic with the Trump administration and GOP-controlled state Legislature haven’t always worked. The General Assembly passed a bill this week to reopen several businesses, which Wolf is expected to veto. (On Friday, Wolf revealed his guidelines for slowly re-opening the state by region, but shared no exact timeline.)

“His business shutdown order is so overbroad that he has shut down the critical supply chain that is really needed to produce the items that are needed for this health care crisis,” said Lawrence Tabas, chairman of the Pennsylvania Republican Party. “His order shut down textile manufacturers, yet the irony is that the material that those manufacturers are producing are what’s needed to make face masks and hospital gowns.”

Wolf pushed back against Tabas, arguing that the state government has worked with businesses to make needed supplies, such as a northeastern Pennsylvania plant that went from manufacturing Major League Baseball uniforms to creating face masks and gowns.

But Wolf said he understands people’s frustrations: “One of the challenges we have is to steer the middle course between keeping the central businesses open and keeping this virus from overtaking our health care system.”

Wolf said his style “is just me — I’ve been like this since I was a kid.”

Sure, he said, “maybe I don’t have the approach that a traditional politician should have in a very partisan Democratic setting” and “if maybe I were a more seasoned politician, I’d be trying to get people in New York or Massachusetts or California to like me, but that’s not who I’m working for.”

He said there are “clear political differences” between him and Trump — the president had singled out a Wolf veto for criticism during his State of the Union speech — but "we need to work together.”

The approach has been popular among state voters: A recent poll showed 62 percent approved of Wolf’s handling of the coronavirus, well ahead of Trump’s job performance on the issue in the state.

Even when Pennsylvania hasn’t received the equipment it needed from the federal government, Wolf’s administration has been loath to make it a media spectacle. Compared with other states, his health department was slow to reveal the number of supplies it requested but hadn’t gotten from the feds. It said that was partly because some shipments came in without packing lists.

When House Democrats released Federal Emergency Management Agency documents earlier this month, they showed that Pennsylvania hadn’t gotten enough masks, gloves, coveralls and numerous other items it had solicited from the national stockpile.

On a private call in early April, the Pennsylvania Association of Staff Nurses and Allied Professionals told local and state elected officials that they were rationing masks and other personal protective equipment in some hospitals, according to several people on the line. Doctors were being prioritized over nurses, and nurses with seniority were being prioritized over those without seniority, they said.

On Monday, the state’s health care workers finally got some good news: The federal government is sending 2 million N95 masks to Pennsylvania, Pence announced during the White House’s coronavirus press conference — more than it had asked for.

The state also received a shipment this month with gloves, coveralls and other supplies. It still needs 1,000 ventilators from the feds. And “we could use more gowns. But aside from that, we’re well within the range of things that we will need,” Wolf said. “I think increasingly that they’re actually able to deliver on the things that they say they’re going to do.”