How the CDC director became the MAGA whisperer on coronavirus 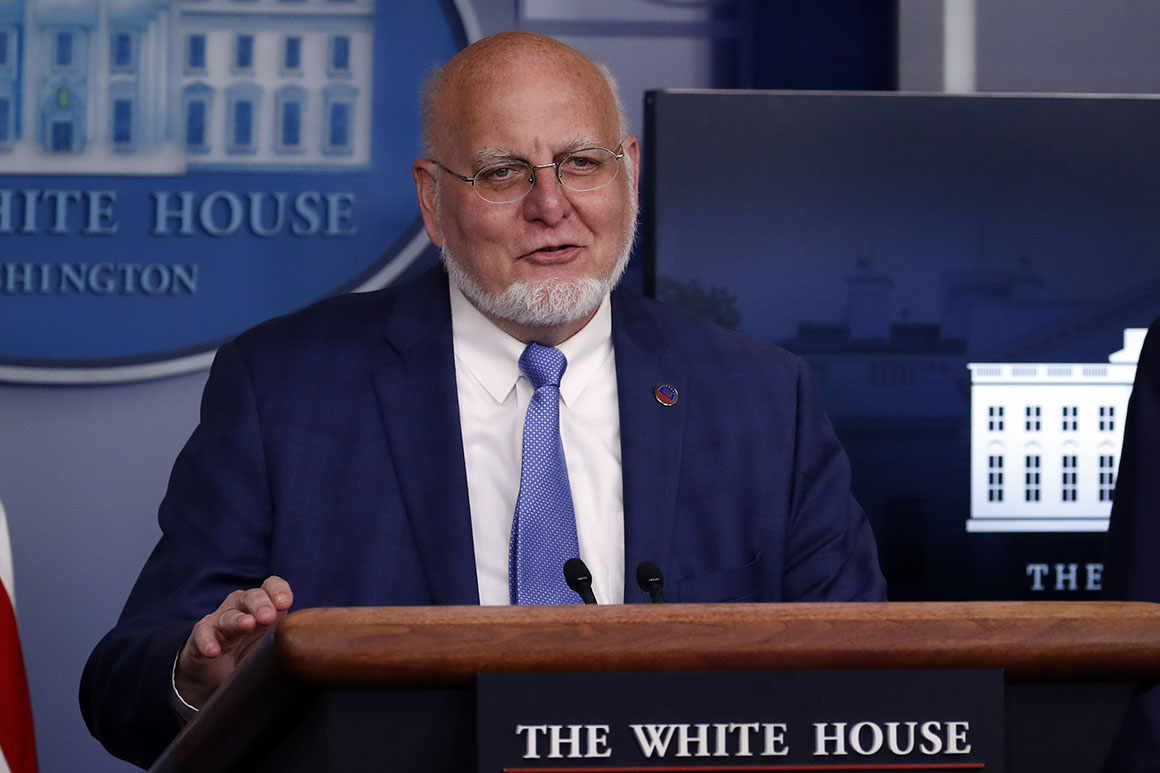 Since his agency bungled the coronavirus testing rollout, CDC Director Robert Redfield has rarely been seen at the White House podium or on national television.

Normally the leader of the Centers for Disease Control would be the face of a global public health response. But his agency’s stumbles early in the pandemic — on testing, the Diamond Princess cruise ship evacuation and blunt messaging on the worsening outbreak that got ahead of the White House — sidelined him. He does few national interviews, and while he attended Wednesday’s White House coronavirus briefing, he’s been a sporadic presence in that venue.

Instead, he’s finding a home on local radio.

But on these obscure shows, the conservative Christian scientist has found an unusual niche. He’s becoming the point man for President Donald Trump with a fervent crowd that has been deeply skeptical of the coronavirus outbreak, believing it a hoax, a Chinese weapon or a Deep State plot to tank the economy and destroy the Trump presidency.

Redfield doesn’t offer conspiracies when he speaks to the Trump base via talk radio, or on local stations in conservative parts of the country. He emphasizes the “powerful weapon” of social distancing. He tells listeners that he understands that staying home is a sacrifice, but asks them to “close their eyes” and think of the vulnerable people whose lives they can save if they do their part to break the chain of transmission — people like his own grandson, Joey, who has cystic fibrosis.

“Think of those individuals. Those are the individuals our sacrifice will protect, and maintain their life,” he said on radio host Todd Starnes’ show on April 1.

Redfield has become somewhat of the MAGA crowd whisperer, using the mantle of the Centers for Disease Control and Prevention and his credibility as a religious conservative to bring medical science to the doubting public.

“Dr. Redfield likes the radio format, of being able to interact,” said a CDC spokesperson, stressing that the agency director is speaking in his role as a clinician. He referred comments about any larger communication strategy to the White House.

CDC recently added a communications person to help with the agency’s Covid-19 response and Redfield’s media appearances, and one White House official noted that Redfield’s professorial style doesn’t really play so well on a channel like CNN.

“Maybe he’s getting calls from people because they want to hear from somebody who they know is faithful,” the White House official said. “And they want to hit that as a talking point, ‘Hey Dr. Redfield, we know that faith is really important to you in this challenging time’ and Redfield can talk to that in ways that other people can’t.”

The CDC has had a low profile since the emergence of the testing problems, which let the coronavirus spread undetected through the country for weeks. In addition, White House officials blamed the agency for poorly managing evacuation of cruise ship passengers from Japan. And they pushed back when senior CDC official Nancy Messonnier told reporters in February that the virus was going to cause significant disruption — when Trump was insisting it was under control.

But recently, Redfield has been increasingly visible — at least on the regional stage. The CDC director has done more than a dozen radio appearances since March 24. He’s been on coast to coast: from a network owned by Church of Latter-day Saints to a chat with former SNL cast member Joe Piscopo, a one-time Democrat turned Trump supporter. He’s appeared on a few NPR affiliates — including Atlanta, where the CDC is based — but mostly he’s on stations that skew to conservative audiences, or on shows whose hosts have a clear ideological edge.

One host, Starnes, mused that local officials’ orders on social distancing were “incredibly unconstitutional” and likened mainstream media coverage of coronavirus to a “big Netflix special” in a quest for ratings and attention.

The CDC is usually the lodestar of any U.S. public health crisis. But in this pandemic it’s known as the agency that developed and defended the flawed test that let the coronavirus spread far and wide before American officials understood the calamity’s scope.

As the face and voice of the CDC, Redfield has been almost invisible as heads of other federal health and science agencies stand alongside President Donald Trump at the daily White House briefings, appear on the Sunday talk shows, tweet their #Socialdistancing tips and get profiled on TV. National Institute of Allergy and Infectious Disease Director Anthony Fauci even had his face printed onto one bakery’s cupcakes.

But on these local and regional outlets, Redfield may be filling the role of “trusted communicator” for the conservative audience skeptical of mainstream media and the public health establishment, said MIT political scientist Adam Berinsky, who studies the sticking power of misinformation and tactics to counter it.

If you are looking for someone to close the partisan gap on coronavirus, Redfield, he said, has the “kind of impeccable credentials you need.”

On the shows, Redfield mostly stays on the White House message — although he doesn’t rush to embrace everything Trump himself has said. For instance, on the malaria drugs that Trump has relentlessly pushed as a Covid-19 treatment despite a lack of evidence, he’s adopted a studied neutrality.

Asked for his expert opinion on hydroxychloroquine, the CDC director usually starts out by praising the American pharmaceutical industry’s “ingenuity,” before addressing the specific drug. “It’s going to be studied in a controlled clinical trial too, which will be more definitive,” Redfield told Piscopo.

Facing similar questions on the Dom Giordano show — before a Philadelphia-area conservative host — Redfield referenced his own early medical career treating patients for HIV. During the AIDS crisis, he explained, doctors would try many therapies, even though they knew there wasn’t much proof for them. “Many of us, including myself, used off-label drugs,” he said, and doctors might think similarly about hydroxychloroquine or remdesivir, another prominent therapeutic candidate, in the midst of the coronavirus pandemic. “It’s not something I would discourage. It’s not something I would necessarily recommend,” he said.

“I think I would be confident to try hydroxychloroquine,” he concluded, and the drug “does appear to be safe.” Some critics of Trump’s emphatic endorsements of the unproven treatment have noted it can aggravate heart arrhythmia in some patients. On Wednesday, the CDC removed a guidance related to hydroxychloroquine from its website, according to Reuters.

On testing, he’s defended his agency even though the CDC’s performance has been excoriated by health experts far and wide. On one show he called the coronavirus test an “excellent” one, constrained by state public health labs’ technological bottlenecks to process them rapidly. On another Fox News podcast, Redfield tried to shift the testing focus to “commercial, clinical medicine.”

“That has never been CDC’s responsibility,” he said.

Redfield has also echoed Trump’s claims that the U.S. is ahead of much of the world on testing. For instance, in a March 27 appearance on the Ross Kaminsky show, he declared, “We did more tests than Korea did in eight weeks, we did in the last eight days.” He didn’t note the United States started late — and has more than six times the population.

Throughout the run of shows, Redfield has subtly put down the initial Chinese response to the virus as inadequate and harmful. When asked about China, he usually notes that his counterparts at the Chinese CDC initially believed the disease did not hop from human-to-human. “I always assumed it would go human-to-human,” he said on the Ross Kaminsky Show on March 26.

But he didn’t expect it to spread this fast.

“No one could have predicted how transmissible, how infectious this virus really is,” he said on Fox News’s Brian Kilmeade Show.