How the Trump Era Has Strained, and Strengthened, Politically Mixed Marriages 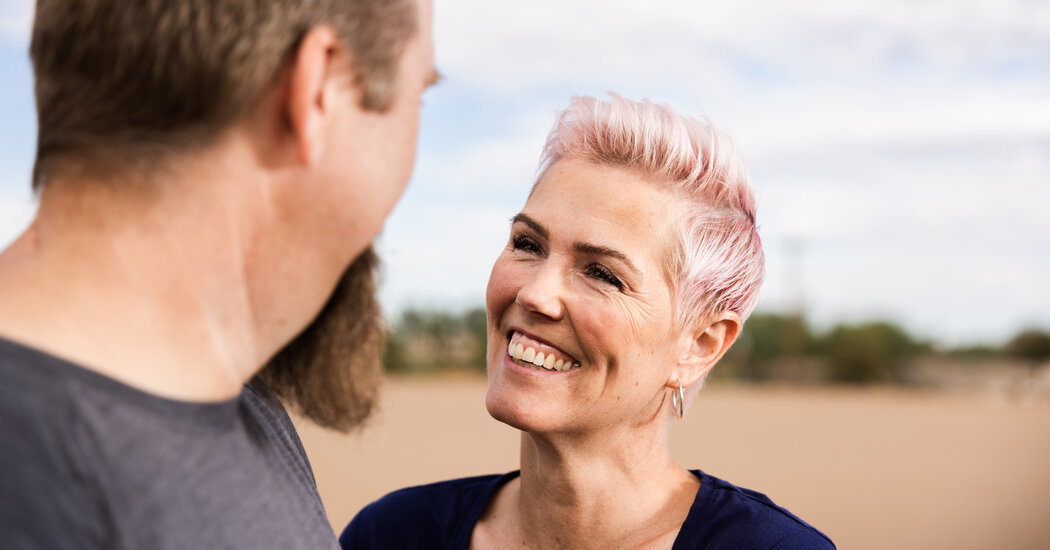 There are few remaining areas of American life in which people aren’t sorting themselves by political allegiances — including romantic relationships.

Politically mixed marriages are rare, and over the last four years, Americans have become less willing to date someone with different political views, research has shown.

Now there’s evidence that the heightened partisanship has — paradoxically — led politically mixed couples to understand each other better than before. Surveys have shown that couples often are confused about how aligned they are: Women underestimate the likelihood that their spouses are voting Democrat, while men overestimate that their spouses are voting Republican. But this election cycle, these gaps are smaller, according to New York Times/Siena College polling in three battleground states.

Although a sizable share of Americans don’t follow current events closely and don’t vote, the Trump presidency has been so polarizing and omnipresent that many voters say it has been all but impossible to avoid politics, even for couples who ordinarily do.

“Before Trump, we rarely talked about politics,” said Bradley Hutchinson, 58, an automotive technician in Glendale, Ariz. That changed in 2016. At the time, his wife, Denise, 64, a manager at a utility, was uncertain about Mr. Trump.

Her views are much stronger now: “I’m voting for him because of what he’s done and what he supports and what he fights for.”

Politically aligned marriages are part of a greater sorting happening in the United States. People are increasingly marrying people like themselves in terms of education and earnings potential, and living in places surrounded by others who share their beliefs and lifestyle. These things are correlated with political views.

“There is plenty of evidence that people are prioritizing politics in a way they didn’t before, in both friendship and dating,” said Daniel A. Cox, a research fellow in polling at the American Enterprise Institute.

Party registrations don’t necessarily represent political views. Still, it is striking that one in 10 voters who are registered as a Democrat or Republican are married to someone in the opposite party, according to a recent paper. The paper, by Eitan Hersh of Tufts and Yair Ghitza of Catalist, a research firm, analyzed voter registration data on 18.3 million married, opposite-sex couples.

Women and Democrats are the groups that care most about having the same political views as their romantic partner, according to a 2020 installment of the institute’s American Perspectives Survey. President Trump has been particularly divisive, it found. Nearly two-thirds of Americans said they would not consider dating someone who disagreed with them about the president. Eight in 10 Democratic women said so.

Michelle Krueger, a 24-year-old student in Phoenix, said she and her husband talk about politics often, and sometimes disagree. But they never differ on their support for the president: “We didn’t have to convince each other,” she said.

For others, it can get acrimonious. Most people who disagree with their partners about politics avoid the topic, the American Perspectives Survey found. Voter turnout is lower for mixed-partisan couples, who may skip voting to minimize conflict, Professor Hersh said.

Bertha Brunton, 52, a school health care provider in Angelus Oaks, Calif., plans to vote for Joe Biden. Her husband, George, a retired firefighting captain, supports Mr. Trump, to her great dismay. For him, gun rights supersede everything else.

“We decided not to talk about politics anymore because we couldn’t come to agreements,” she said. “My son is on my side, my oldest daughter is on his side, so it was causing conflict in every part of our family.”

Sarah Longwell, a never-Trump Republican political strategist, has done about 50 focus groups in the last two years with women who voted for Mr. Trump in 2016. She said she has heard from some who plan to vote for Mr. Biden but aren’t telling their families or friends.

“There’s a reluctance to be public about their feelings about Trump, because where they live, the overwhelming sentiment is even if you don’t think Trump is great, the Democrats are definitely worse,” she said. “I have women say, ‘My husband would be so surprised to hear me talking like this.’”

But for many couples who have typically disagreed on politics, life is more harmonious now. People who married members of the opposite party are more likely to be moderate, and in this particular election, that may mean they’re both voting for Mr. Biden, researchers said.

Elisabeth and Patrick Foreman, of Chandler, Ariz., didn’t vote in 2016 because they didn’t like either candidate. This time, she is pro-Biden: “I think that he is able to unite people.”

Ms. Foreman, 48, who works in billing at the warranty firm where her husband is a partner, told pollsters that Mr. Foreman was voting for Jo Jorgensen, the Libertarian candidate. In a follow-up interview, she said his choice frustrated her, because she felt that it was effectively a vote for Mr. Trump.

“Maybe I don’t explain it very well, but he doesn’t see that,” she said. “We cannot sit down and have a conversation from beginning to end without someone getting upset.”

But in an interview with Mr. Foreman, 46, it turned out she had been more convincing than she realized. He said he now intended to vote for Mr. Biden.

“I struggled with that for a minute, and then realized a vote for Jorgensen is just a lost vote,” he said. He credited, among other things, conversations with his wife.

Political analysts talk about patterns among large groups of voters, like those who are suburban or Black or college-educated. But influences inside homes can be even stronger, social scientists say. And when people feel strongly — as they’re more likely to in this election — they have more incentive to try to influence one another.

“These people are cross-pressured, where people are voting different ways within the household and having these conversations and gradually resolving the difference,” said Will Jordan, a Democratic pollster at the Global Strategy Group who has studied marital dynamics in voting.

That happened with Fatima Villegas and George Esparza of Las Vegas. They are both 28, and he plans to vote for the first time — partly because she persuaded him.

“He just did not believe in the government and just felt like your vote really had no power,” said Ms. Villegas, an office manager. “I’m very much proud of being able to be a citizen and be able to vote, and tried to bring that importance to him.”

They both plan to vote for Mr. Biden. She said his policies would improve the future for their daughter, who is 2. Of the Trump presidency, she said, “You can only cook so much in hell before you die.”

Politically mismatched couples may be the best example that Democrats and Republicans aren’t necessarily too polarized to relate. Battleground neighborhoods, where the number of Democrats and Republicans are roughly equal, have the highest rate of households with politically mixed marriages, the political science paper found. That suggests that in these places, the political climate may be more civil than people realize, Professor Hersh said.

“When we construct an image of the other party at a distance, abstractly, we tend to construct someone who’s different on every dimension,” he said. “In spite of all the heightened rhetoric about Democrats and Republicans hating each other, they really do have exposure to these people in their lives, in their homes and in their beds.”

ByAndrew MangumAndrew Mangum is a photographer in Baltimore, Md., who spent eight months documenting his home life during the pandemic with his wife, Jennifer,...
Read more
Fashion

ByPenelope GreenShe was born at Windsor, but unlike her royal relatives, she had to make a living and went to work at 19. Cripplingly...
Read more
Fashion

ByNina ReyesWhen Alys Daly met Dan Peters in August 2018 through the dating app Bumble, she was no dating neophyte. She’d been at it for...
Read more
Fashion