How the White House will be won: The 8 states that will decide the election 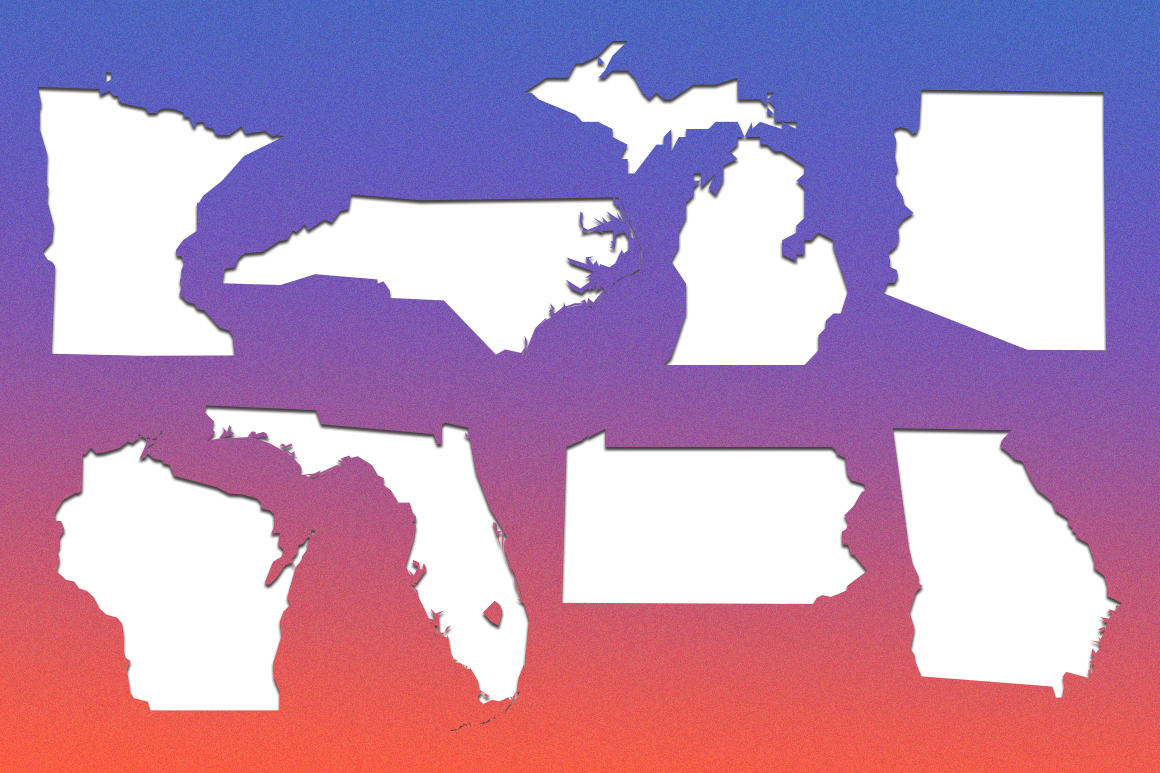 The selection of these swing states is based on a variety of factors — polling, demography, past and recent election history, voter registration, interviews with state and local party officials, strategists and pollsters. The individual campaigns have also revealed the places they are prioritizing through staffing, resource allocation, TV and radio advertising and candidate visits.

When POLITICO first chronicled these swing states after Labor Day, the roadmap ahead for Trump and Biden was clear. The president needed to max out his performance with rural voters, halt his erosion in the suburbs, and turn out white working-class voters who didn’t vote in 2016. Biden needed a big turnout in the big cities — particularly among African-American voters — increase his share among Latino voters and recapture some of the places that flipped to Trump after twice voting for President Barack Obama.

While it’s too early to tell how successful each has been at meeting those goals, one thing seems clear from our most recent reporting — Trump has failed to turn his fortunes around in the suburbs, particularly among women.

“Honestly, all the moms I know, we are really nervous about our kids, what kind of future they’re going to have. And Trump is the one making us nervous,” a woman in suburban Livingston County told Tim Alberta.

Swing state Republicans aren’t entirely convinced that Trump’s situation is dire. While acknowledging the obstacles to his reelection, they are quick to point out a salient fact: Trump also trailed in polls in many battleground states at this point in 2016 only to win them narrowly on Election Day. They report high enthusiasm within the GOP base and deep support for the president in rural America — support that isn’t being captured in the polls, they say.

In Wisconsin, Republican Party Chair Andrew Hitt told Natasha Korecki, the rural counties that powered Trump’s 2016 win are “glowing bright red. We really have no concerns that the rural vote is going to turn out for the president.”

Here’s a closer look at the eight swing states that will decide the 2020 election:

In Arizona, Donald Trump’s handling of the pandemic is proving costly, leaving him struggling to match his 2016 performance among those over the age of 65. October polling shows Biden is chipping away at Trump’s support among older white voters, especially among the once reliably Republican senior population in populous Maricopa County. — Laura Barrón-López

Republicans typically hold a slight edge in absentee ballot returns in Florida elections. But this year, for the first time ever at this stage of a general election, Democrats here are outvoting Republicans — and by a huge margin. The unprecedented early voting numbers have electrified Democrats, but campaign veterans warn that a wave of Republican votes is coming on Election Day. — Marc Caputo

Most of the attention in Georgia this year is directed toward Atlanta’s populous suburbs, which have turned hard against Republicans in the Trump era, But the outcome might come down to a less scrutinized force in this state: white rural voters. And Donald Trump has room to grow his support there. — Elena Schneider

All three Rust Belt states that Trump improbably won in 2016 – Michigan, Pennsylvania and Wisconsin — are problematic for the president this year. But Michigan is where things look bleakest. His support has diminished among the white working-class. Black turnout appears certain to rebound after a dismal showing in 2016. New laws that allow for early voting and no-excuse-absentee balloting are expected to push voter participation to historic levels, with Democrats the expected beneficiary of low-propensity Michiganders flooding the ballot box. — Tim Alberta

Donald Trump has fixated on Minnesota since his narrow loss to Hillary Clinton there four years ago. But he’s not running as well with white voters and independents as in 2016. And with less than a month until the election, his prospects are dimming. — David Siders

What happens in fast-growing Mecklenburg and Wake counties will shape the political landscape long past November. The two counties, by far the most populous in the state, are expected to play a decisive role in the presidential race, a closely contested Senate race and the governor’s contest. — Michael Kruse

For a few months this summer, things were moving in the right direction for Donald Trump in Pennsylvania. Between July and September, the president cut Joe Biden’s lead in half. But since then, Trump’s progress has stalled, even backslid: Biden is now up by nearly 7 points, according to polling averages. The president’s unsteady coronavirus leadership is a key reason for the decline. — Holly Otterbein

A confluence of events over the past month — all seeming to favor Democrats — has shifted the dynamics in this Rust Belt battleground. Wisconsin plunged into its worst bout with Covid-19 since the onset of the pandemic, reminding voters of the uneven response from the Trump administration as well as the president’s early attempts to dismiss the severity of the virus. A Green Party candidate was not allowed on the ballot — erasing the prospect of a third-party siphoning of votes that contributed to Hillary Clinton’s 2016’s race razor-thin defeat. And there are increasing signs that key constituencies whom Donald Trump needs to defeat Biden, including suburban and swing voters, are moving away from him. — Natasha Korecki