How to live longer: The popular diet proven to increase your longevity 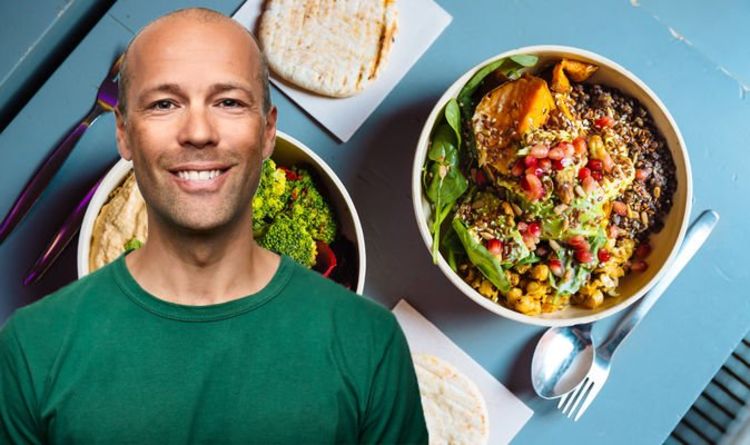 The quest to lead a long and fulfilling life essentially involves finding ways to fend off the threat of developing chronic complications. Heart disease and obesity are major killers in the UK so taking measures to reduce your risk of falling into these unhealthy traps is essential to longevity. Diet plays a key role in protecting you against life-threatening complications and certain diets offer a host of health benefits.

Evidence shows that the vegan diet, for example, can help to counter the threat of deadly diseases.

As the NHS explains, a vegan diet contains only plant-based products such as vegetables, grains, nuts and fruits, and excludes foods that come from animals, including dairy products and eggs.

According to a large-scale analysis, one of the primary health benefits of sticking a plant-based diet is that it boosts heart health and lowers your risk of dying from a heart attack, stroke or other cardiovascular disease.

The findings, published in the Journal of the American Heart Association, was based on an analysis of food intake information from more than 10,000 middle-aged U.S. adults who were monitored from 1987 through 2016 and did not have cardiovascular disease at the start of the study.

The research, presented at the Annual Meeting of the European Association for the Study of Diabetes, suggested that a 16-week vegan diet can boost the gut microbes that are related to improvements in body weight, body composition and blood sugar control.

Commenting on their findings, the authors said: “A 16-week low-fat vegan dietary intervention induced changes in gut microbiota that were related to changes in weight, body composition and insulin sensitivity in overweight adults.”

However, the authors acknowledge that further work is needed to isolate the effects of the vegan diet itself from that of the reduced calories.

The benefits of eating a vegan diet may extend to improved psychological wellbeing too, according to findings published in the BMJ.

To uncover the link, researchers analysed available evidence and found 11 relevant English language clinical trials, published between 1999 and 2017, comparing plant-based diets with other types of diet, and involved a total of 433 people in their mid-50s, on average.

Eight of the trials assessed the impact of a vegan diet and six included patients being given information on optimal nutrition to help them better understand the benefits of a plant based diet.

The results of a systematic analysis showed that quality of both physical and emotional health improved only in those patients on a plant based/vegan diet.

Similarly, depressive symptoms improved significantly only in these groups.

Other measures to increase longevity

Exercising regularly can also ward off the threat posed by obesity and its associated risks.

As the NHS explains, having a healthy weight reduces your chances of developing high blood pressure – a precursor to life-threatening complications.

The health added: “Regular exercise will make your heart and blood circulatory system more efficient, lower your cholesterol level, and also keep your blood pressure at a healthy level.”

ByVitamin B12 is key to strong, healthy hair growth. This is because it helps the body to metabolise amino acids - the building blocks...
Read more