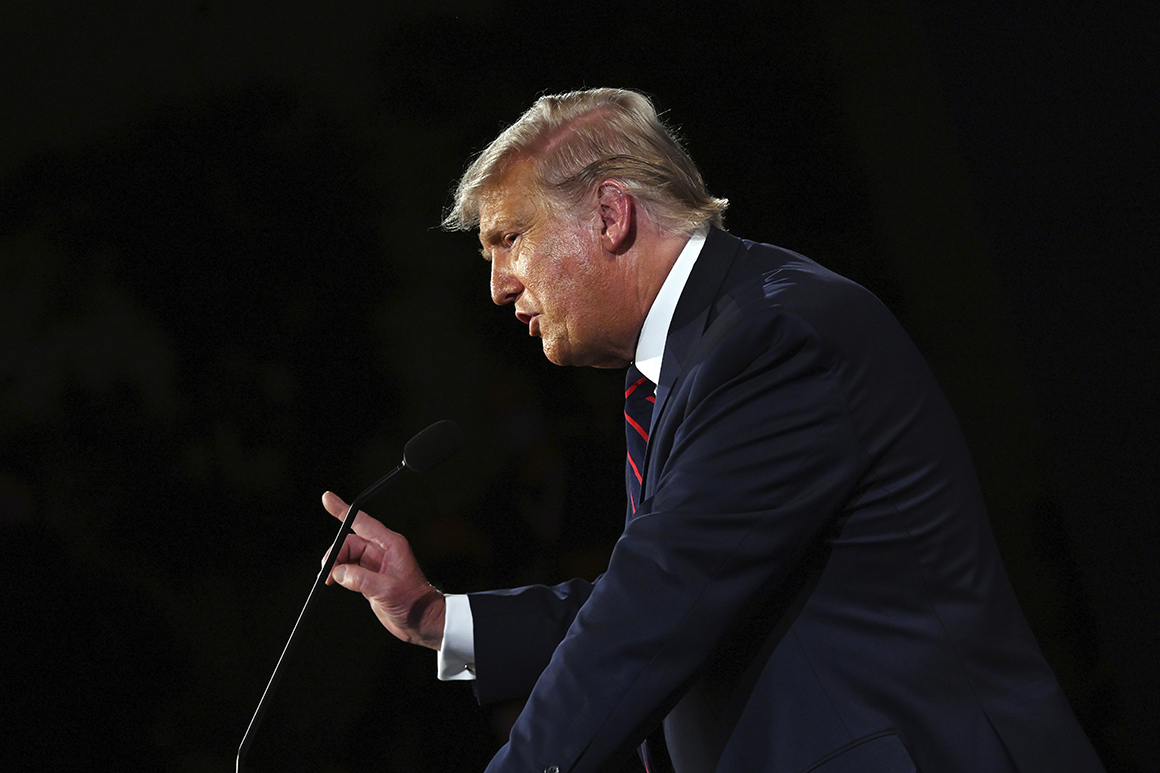 The commission’s brief statement didn’t mention either candidate by name, but it was clear the move was intended to crack down on the disruptions largely, though not exclusively, instigated by the president.

For the COPD, it was a tacit admission of failure. For Trump, it offered a capstone for his four-year campaign attacking the legitimacy of what he refers to as the “so-called Commission on Presidential Debates.”

“They’re only doing this because their guy got pummeled last night.” the Trump campaign responded in a statement. “President Trump was the dominant force and now Joe Biden is trying to work the refs. They shouldn’t be moving the goalposts and changing the rules in the middle of the game.”

The suggestion that the commission was contemplating rules changes at Biden’s behest was in keeping with Trump’s grievance-driven politics, serving as a campaign-sustaining elixir for a candidate who thrives on chaos and picking fights with the political establishment. It’s also a preview of what’s to come for the next 34 days on the campaign trail as Trump, trailing in the polls, seeks to cement the narrative that the fix is in and the system is rigged against him in his bid to win a second term.

“He’s a grievance guy. Everybody’s always out to screw him,” Nelson Warfield, a veteran Republican strategist and debate-prep specialist, said in describing Trump’s mindset and his appeal to his base. “He wins despite the establishment colluding against him.”

Trump’s efforts to undermine the commission date back before his first debate with Hillary Clinton, when in August 2016 he claimed without evidence that Clinton and the commission colluded to schedule the first two debates during NFL football games to minimize the size of the viewing audience.

Trump then raised the issue of a biased debate, saying he wanted a “fair moderator” — an issue he resurrected in his clashes Tuesday night with moderator Chris Wallace, the gravelly voiced, no-nonsense host of “Fox News Sunday.”

Despite his objections, Trump ultimately participated in the 2016 debates. But in October of that year, after a debate in which he was widely considered to be the debate loser in snap polls and focus groups, he attacked the commission once again, suggesting that studio sound issues were designed to undermine him.

The commission remained off his radar for another three years, until in December 2019 — not long before the first Democratic primary votes — Trump began bashing it for alleged bias and being “stacked with Trump Haters & Never Trumpers.” He mused publicly about doing more debates and circumventing the commission.

None of that came to pass. Behind-the-scenes negotiations between the campaigns and the commission this month remained out of the public eye and the first debate took shape without any drama.

The commission — a bipartisan nonprofit composed of political, media and educational figures — declined to comment for this article.

A sign of what was to come Tuesday night occurred the morning of the debate. The Trump campaign amplified a baseless conspiracy theory that Biden’s campaign wanted the Democrat to wear an earpiece so he could have instructions given to him remotely — a repeat of a false claim advanced by the president’s son and allies in 2016 against Clinton. Biden’s campaign denied the claim.

An increasingly frustrated Wallace kept interrupting the president, imploring him to let Biden finish. Suddenly, the president had the clash he appeared to be spoiling for: a fight with the establishment media.

Trump’s longtime friend and advisor Roger Stone quipped that “Trump very clearly defeated Chris Wallace in the debate with Biden coming in a distant third …. This is the perfect example of why you don’t accept the authority of the Commission on Presidential Debates, which is neither a commission, nor appointed by the president nor does it have anything to do with the debates.”

The Biden campaign has pledged to accept “whatever set of rules” the commission comes up with. The next presidential debate is scheduled for Oct. 15.

Whether his attacks on Biden, Wallace and the commission were successful is an open question. Some veteran Republican strategists and even some of Trump’s own advisers grimaced at his performance, fearing it turned off undecided and swing voters, especially women, who are siding with Biden in droves.

“He’s his own political strategist. It’s like an alternate universe. But the fact is, he’s in the Oval Office and so it’s impossible to argue with him,” one Trump adviser said privately. “If we didn’t have a lot of support from women heading into the debate, we sure as hell didn’t walk out with more.”

But Florida Rep. Matt Gaetz, one of Trump’s top TV surrogates, said doubters don’t understand the president or his base.

“The president was dominant. His voters know that Washington needs to be interrupted,” Gaetz said. “A lot of MAGA voters resent the elitism that Chris Wallace personifies.”