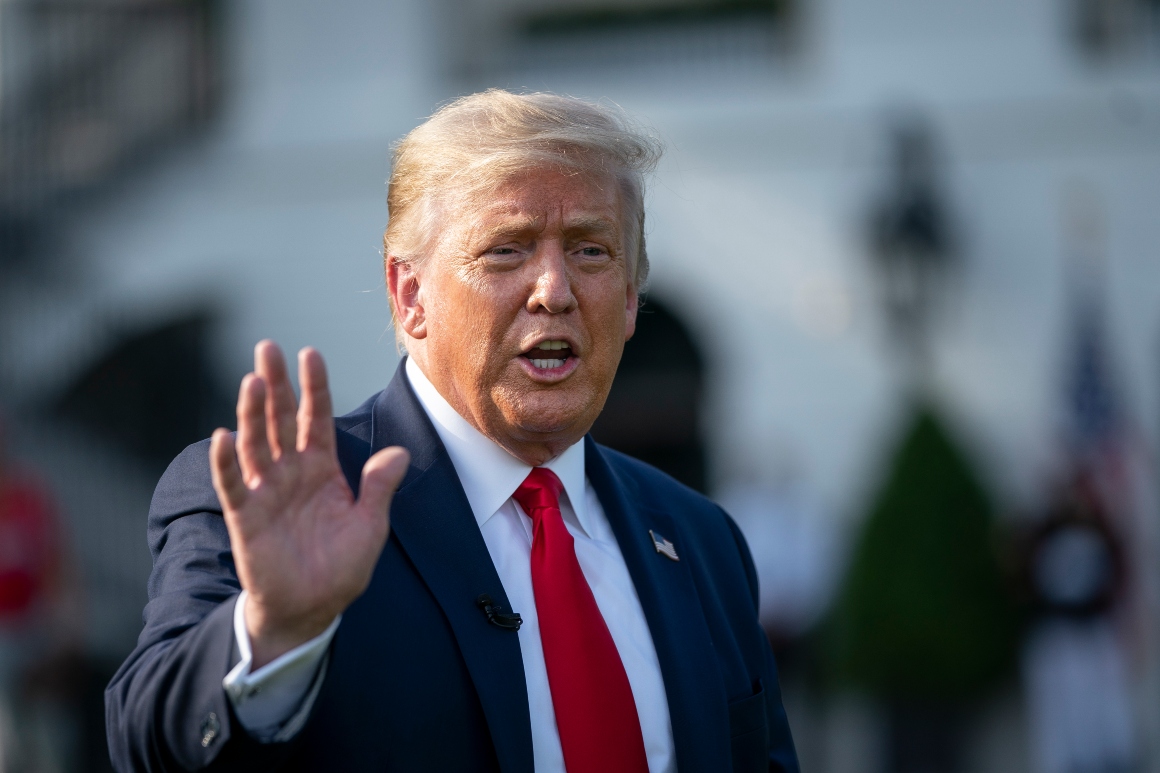 But for Trump, who for months has resisted pleas to take the virus seriously, the decision reflected a sudden shift in posture. Over the past week, the president has resuscitated his coronavirus briefings, urged people to wear masks and conceded that the virus would “probably, unfortunately, get worse before it gets better.”

Indeed, by Thursday the president had come to terms with pulling the plug, not betraying anger or irritation at being forced to retreat, according to a person familiar with his dealings on the matter.

“The president made the right decision. With 10,000 new cases daily [in Florida], it was clear a decision had to be made. It’s not good for his politics,” said Brian Ballard, a veteran Republican lobbyist and Trump ally who had been raising money for the convention. “It would have been good for him to have been broadcast live from Jacksonville for three nights, but he made the decision that was best for all involved. Not sure what’s next, but this was right call.”

Deliberations about canceling the convention accelerated in the 36 hours prior to Trump’s announcement in the White House briefing room Thursday, a person familiar with the discussions said. The president told reporters covering the latest of his just-revived coronavirus briefings that it wasn’t “the right time” to hold a “big, crowded convention.”

But behind the scenes, senior Republicans had been considering the possibility of forgoing an in-person event for the months. Even before deciding to move the convention from Charlotte to Jacksonville last month, party officials considered the prospect of scrapping it. As coronavirus cases spiked around the country, they considered an array of options for how to stage Trump’s coronation safely, even as the president and the party plowed ahead with fundraising and planning for Jacksonville.

Pulling it off even in the best of times would be a staggering task. Normally, a party spends years planning a convention; Republicans had just two months to collect the $ 20 to $ 25 million needed, and tapped a veteran party fundraiser, Jeff Miller, to help them do it. But money would turn out to be the easy part compared to figuring out the sheer logistics of holding a convention during a pandemic.

After huddling with Trump in the White House last week, organizers settled on a plan to shrink the event. Only delegates and a guest of their choosing would be allowed to attend Trump’s Aug. 27 nomination speech, McDaniel wrote in a letter to RNC members.

McDaniel made four trips to Jacksonville to chart plans, most recently two weeks ago. Her staff would shuttle to Florida weekly.

Tony Sayegh, a former Treasury Department official helped to steer the White House impeachment defense, was tapped to help with programming for the four-day event.

But as planning intensified, so were discussions about shutting down the celebration. Coronavirus cases were spiking in the Jacksonville area. And by this week, convention officials were confronting another growing problem: Security.

“As we’re talking today, we are still not close to having some kind of plan that we can work with that makes me comfortable that we’re going to keep that event and the community safe,” Duval County Sheriff Mike Williams told POLITICO Monday explaining his reasons for not providing law enforcement.

Republican officials remained confident they could pull the convention off and raise the money needed. But Trump was growing warmer to the possibility of putting the kibosh on it. He hinted at his forthcoming decision Tuesday, telling reporters that “Florida is in a little tough, or a big tough, position.”

By Wednesday evening, he was placing calls to confidantes raising the idea of canceling. He finally pulled the trigger Thursday afternoon began informing close associates of his decision.

The tipping point, aides said, was an acknowledgment of the overwhelming health risks. Florida has surpassed 10,000 new coronavirus cases nearly every day for at least two weeks. On Thursday, the state Department of Health reported a record 173 new deaths. The state’s positivity rate, which hasn’t dipped below 10 percent for a month and hit more than 12 percent Thursday.

Hoping to keep the news from leaking and knowing Trump wanted to break the news himself, aides kept a tight circle of people involved in the deliberations. Organizers on the ground in Florida said they first heard of the decision when Trump went on TV Thursday. Donors were also caught off guard.

Senior Republican were plainly relieved. They no longer have to scramble to put a massive event together in the face of a pandemic.

But more importantly, the announcement showed that Trump finally understood that his blasé approach to the pandemic was dragging down his reelection hopes.

Organizers say they’re weighing alternative plans for the late-August convention, including whether it will be in an all-virtual format. Like Democrats, they are planning to have four nights of programming.

Regardless of his decision to scrap the convention, Democrats signaled they intend to make Trump’s coronavirus response central to their general election message.

“I’m glad Donald Trump took his head out of the sand long enough to realize what a predictable, preventable disaster he was about to inflict on the city of Jacksonville,” Florida Democratic Party Chair Terrie Rizzo said in a statement.