How walkable is your city? 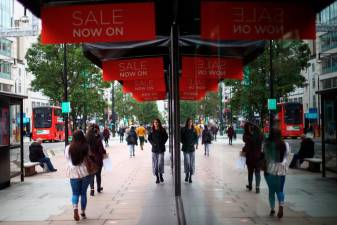 URBAN planners and local authorities must improve walkability in cities to tackle poor health and social inequality, researchers said on Thursday, after the coronavirus pandemic highlighted the importance of being able to walk easily and safely.

The cities of Paris, London, Bogota and Hong Kong are among the most walkable in the world, according to a new study of nearly 1,000 cities by New York-based non-profit Institute for Transportation and Development Policy (ITDP).

Improving walkability is particularly important now, as safety concerns have led to a sharp drop in the use of public transport, posing greater risks for vulnerable residents, said Heather Thompson, chief executive of ITDP.

“COVID-19 has dramatically exposed our inequalities at every level, including options for travel. Those higher on the income scale tend to have access to both walkable neighbourhoods and transport, while those who are lower have neither,“ she said.

“It is essential to shift the balance of space in our cities away from cars. We have so much to gain – from cleaner air to better health to stronger local economies and deeper bonds within communities,“ she said.

During lockdowns to contain the coronavirus, residents in cities across the world took to walking and exercising on streets that were closed to traffic.

As restrictions eased however, traffic has increased. More cars on the road worsen air quality, increase toxic emissions and pose greater risks to pedestrians, according to ITDP.

ITDP’s study ranked cities on measures such as density of urban blocks, residents’ proximity to car-free open spaces, and their access to services including healthcare and education.

Cities in the United States scored low on walkability, the study showed.

“Policymakers first have to understand the problems that car-oriented planning has caused. Then they can take specific steps: from planning dense, human-scale, mixed-use developments to equipping streets with benches, wide sidewalks and shade.”

A separate study led by researchers at the University of Warwick showed that a more sustainable economic model could help the world recover financially from the pandemic, while also achieving goals to reduce carbon emissions.

During lockdowns, improvements in air quality may have saved more lives, while a reduction in environmental noise and traffic congestion led to an increase in the number of people exercising outside, said the study published this week.

Now, walkability must be at the core of city planning, and making streets car-free is “a quick, cost-effective way” of making cities more walkable, Thompson said.

“In our new normal, our worlds have become much smaller and walking is more essential than ever.”- Reuters