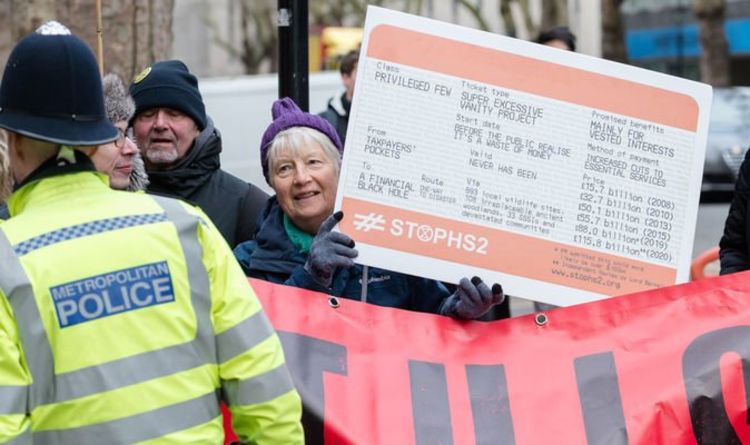 The £100billion high speed rail link was given the green light last week. It has proved controversial, partly because of its cost but also because campaigners say it will have a huge environmental impact.

Now Extinction Rebellion has told a Channel 5 documentary it will begin an offensive aimed at thwarting the scheme, adding: “You will see action in the next few months.” The group says it aims to force action on climate change, but its methods have caused anger.

Chauhan gave up his job as an A&E doctor in Croydon, south London. “I’m trying to serve all of humanity,” he said. He previously helped refugees at Calais.

Warning of the threat to HS2 he said: “There are local squads of our supporters along the route ready to protest. It costs more to take a train to Edinburgh than it does to fly there. It’s an abomination.

“The Government has a responsibility to invest in the right areas. There is no evidence HS2 is a proper response to the climate crisis.

“There isn’t the kind of public support needed for HS2 for us to back it. The Government is still funding the fossil fuel business.

“You will see new actions in the next few months.

“We will be hitting an open-cast coal mine in the North, and HS2, which is intent on destroying huge amounts of beech woodland. We will also have a Scottish group addressing oil rigs.”

Yesterday protesters angered motorists as they blocked roads in the capital demanding the cancellation of London Fashion Week, claiming the industry is a major contributor to climate change. Extinction Rebellion activists also gathered at Gatwick to hand out leaflets about aircraft pollution. It says it plans to bring Cambridge to a halt this week.

The group caused massive disruption in London last year when they blocked main traffic routes, airports and climbed on Tube trains. The film shows London commuters dragging protesters from the roof of a carriage in violent struggles.

Chauhan said politicians are not listening to their demands. “The political system is just responding to the media and business, and not in a rapid enough way to bring about change.”

Asked if he was alienating ordinary people, he said: “There is always that danger. But I would just ask people, ‘What else has worked so far?’ We’ve known about the climate crisis for 30 years.” Britain needs to lead a “revolution”, he said, adding: “This is a matter for our global society. We have to come together.”

He said China and India were major causes of pollution and “needed to change”, but he believed they would follow a lead set by Britain. He added: “We have to show strong leadership about how we do this in the UK.

“We have to create a green revolution in this country. When countries see us turning around, we can only hope they will be inspired.” In the film, Sky’s Adam Boulton says they’re “privileged, middle-class protesters telling others what to do”. But Chauhan said: “We’re not all middle class or privileged. There’s a huge amount of working-class people in this movement who are tired of being silenced by such sweeping statements.

“Sadly it takes people like us doing ridiculous things to get people to start paying attention. We don’t want to be disrupting people but we’re being forced to act in this way.”