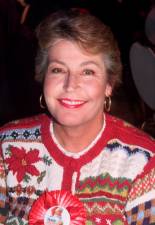 SINGER Helen Reddy, whose 1972 song I Am Woman became a global feminist anthem, died in Los Angeles aged 78 on Sept 29 her family said.

“Our hearts are broken. But we take comfort in the knowledge that her voice will live on forever,“ the family wrote on her official Facebook account.

Born in Australia, Reddy moved to the United States in her early 20s after winning a talent contest. She initially found success with the song I Don’t Know How To Love Him in 1971.

But her song I Am Woman went to No. 1 in 1972 and launched her global stardom and she followed it up with a string of hits, such as Delta Dawn, Angie Baby and Ain’t No Way to Treat a Lady. She hosted her own TV variety show The Helen Reddy Show and starred in Hollywood films.

ByThe new is heightened by details of who is tipped to showrun the project. The report added: "Jeremy Slater, who developed and wrote Netflix’s series...
Read more
Entertainment

Queen Under Pressure: The crazy moment Freddie SERVED Bowie before he was famous

ByUnder Pressure became Queen's second Number One single in the UK (after Bohemian Rhapsody, of course) when it was released on October 26, 1981....
Read more