'I don't want to hear it!' Piers Morgan leaves Sturgeon... 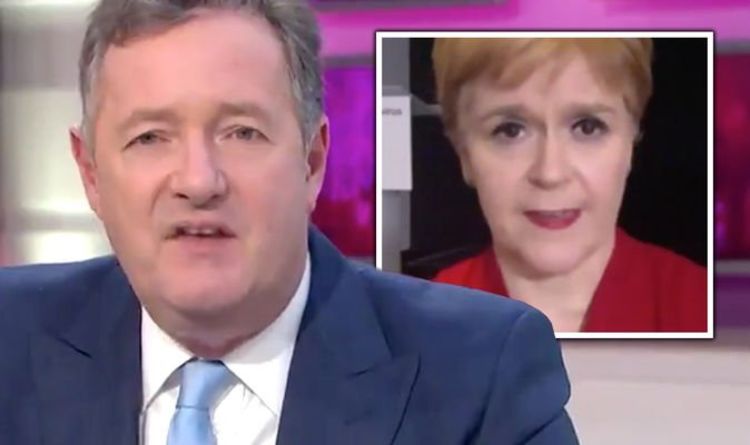 Piers Morgan, 55, and co-host Susanna Reid, 49, were joined on the show by SNP leader Nicola Sturgeon, 49, to discuss the current coronavirus outbreak. However, given the news about Catherine Calderwood, 51, flouting the lockdown measures, the Good Morning Britain hosts weren’t going to bypass the opportunity to grill their guest on the matter. As the Life Stories presenter went head-to-head with the politician, the pair clashed as they gave opposing views on the former chief medical officer’s delayed resignation.

It was announced late last night Dr Calderwood had resigned from her post with immediate effect, after she was pictured visiting her second home in Earlsferry, Fife, on two separate occasions since the lockdown was implemented.

The former chief medical officer apologised for her error, stating there were “no excuses” for her conduct as her visit was not deemed to be essential travel, but initially said she wasn’t going to stand down from the role.

Sturgeon originally agreed with the notion but following her colleague’s resignation last night, the First Minister told the hosts she was “not going to defend” the doctor’s actions.

However, as she seemed to praise the former SNP party member’s work, Morgan told the SNP leader he “didn’t want to hear it,” as the pair clashed.

Firstly ranting about Dr Calderwood’s antics, the host told his guest: “With respect First Minister, she did this twice.

“Consecutive weekends, jollies off 40 miles to her second home in flagrant disregard of everything she was saying.

“I just don’t understand why you would even try to defend her and even when she finally resigned, you still seemed very keen paying a glowing tribute to this woman who had completely betrayed you.”

Morgan went on to slam the former chief medical officer’s behaviour as “dangerous”, stating it was impossible to predict how many lives could now be in peril because of her actions.

Going on to praise Dr Calderwood’s work, Sturgeon said: “I know how hard she has worked over the weeks since this outbreak began.”

However, she was immediately stopped in her tracks as Morgan clashed with her over the fact she was commending the work the former chief medical officer had carried out.

Interrupting the guest, the host declared: “You know what, I don’t want to hear it, with respect, honestly to you.

“I have great respect for you and I don’t blame you for this because we all assume you didn’t know anything about this and I take your word for that.”

Morgan continued: “But honestly, continuing to tell me what a great hard worker she was, the damage she’s done is potentially incapable.