‘I want to get an outcome’: McConnell defends strategy as he faces GOP grumbling 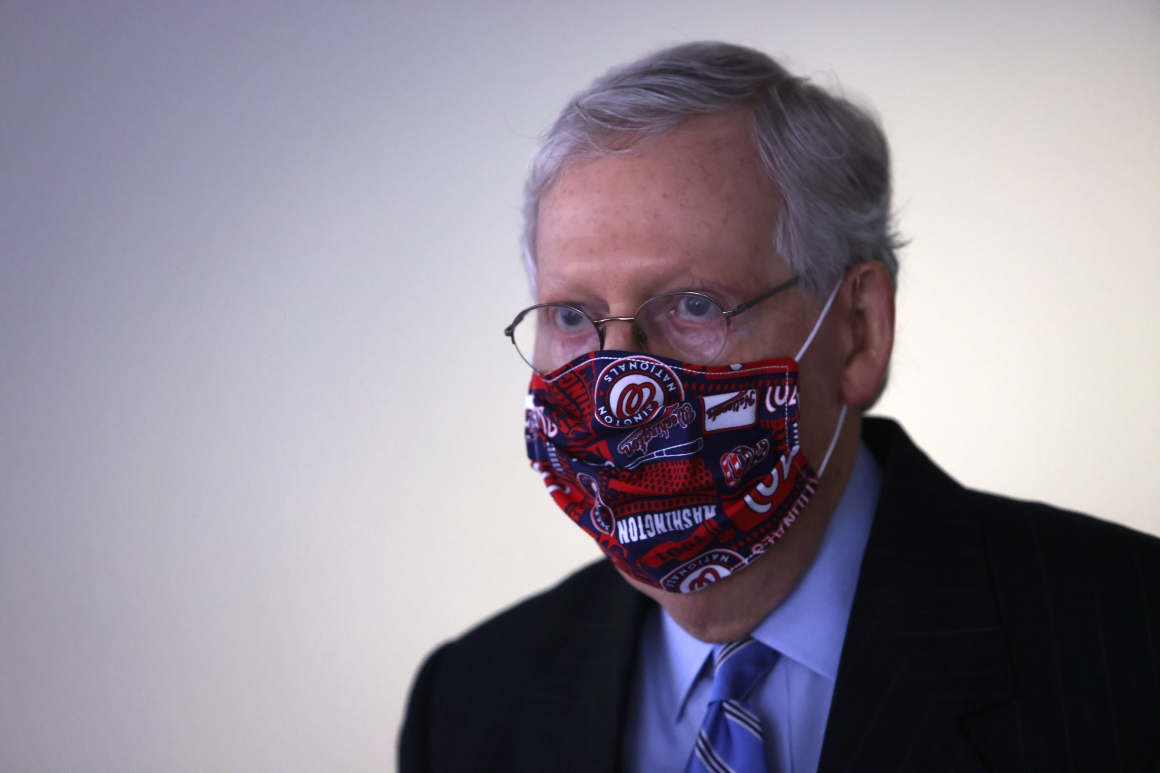 The grumbling coming from his own party is a rare occurrence for McConnell, who always seems so sure-handed in managing his conference. And the delay also opened McConnell to attacks from Schumer, his Democratic counterpart, who is accusing Senate Republicans of failing to take the crisis seriously enough.

But the Kentucky Republican — who has served as the GOP leader for almost 14 years without a challenge — has been candid for weeks about the Republican split over whether passage of another relief bill is even possible.

Pelosi and Schumer have hammered McConnell for not being in the room during the negotiations. But McConnell says he receives immediate updates from Mnuchin and Meadows and proceeds to communicate those to his caucus.

“Unlike Schumer and Pelosi, I’ve got them coming to my entire conference so that nobody’s hiding the ball from anybody on our side,” McConnell said.

Yet the current stalemate threatens to overshadow the successes of the first massive coronavirus bill, which sent direct payments to Americans, established an expanded unemployment insurance program, and created a loan program that provided a life-line to thousands of small- and medium-sized businesses. McConnell played a key role in crafting that agreement and shepherding it through the Senate.

When Congress shoveled more than $ 2 trillion out the door in March to deal with the fallout from the pandemic, the United States was beset by a sense of fear about how the virus would impact hospitals, schools and the entire U.S. economy. While the negotiations were arduous, the resulting bill, the CARES Act, passed 96-0 in the Senate even though lawmakers on both sides objected to many of its provisions.

Those factors, and more, “created a unity that I don’t see there now,” McConnell said. “The political situation obviously deteriorated since March and April, where there was a widespread sense of panic over what to do about this disease, confronted with shutting down the economy as a way to deal with the disease, and what the government could do to get us through this period.”

In the last few weeks, McConnell finds himself in a drastically altered position. Trump is sliding in the polls and McConnell’s Senate majority is at stake. The unemployment rate remains high and the spike in coronavirus cases has set back efforts to reopen schools and businesses.

McConnell and top Senate Republicans introduced the $ 1 trillion Republican alternative — dubbed the HEALS Act — on July 27. However, the roll-out was delayed by a week of jockeying between the White House and McConnell over the provisions of the bill. And after it was released, McConnell faced criticism over elements in the proposal that had nothing to do with coronavirus, such as $ 1.75 billion for renovating the FBI’s headquarters, located across the street from the Trump International Hotel.

“I knew we weren’t going to be having a kumbaya moment in which everybody got together and said, ‘Oh, let’s do it again,’” McConnell said. “So I thought this was the smartest way to handle it. I think at some point here we’ll get an agreement. Hopefully sooner rather than later.”

McConnell is also facing something of an insurgency within his ranks that opposes spending more money altogether, especially as some CARES Act funds remain unspent.

Some of the most vocal opponents of another stimulus package, including Sens. Rand Paul (R-Ky.) and Ted Cruz (R-Texas), have criticized GOP leaders for adopting what they see as the wrong strategy — one that includes progressive priorities and adds trillions more to the national debt. Those ideological arguments were a non-issue in the spring, when Republicans were willing to cast aside their opposition to government spending programs to save an economy that was collapsing.

Paul blamed “the large amount of the caucus who believe that the government is the answer — call them ‘big government Republicans.’”

The tension among Republicans was on display again at the Senate GOP lunch Wednesday, where Sen. Ben Sasse (R-Neb.) criticized Mnuchin. And Cruz said the Senate Republican’s proposal, which includes up to $ 1,200 in direct payments to Americans, will not do enough to help people return to work. When asked after the lunch about McConnell’s strategy, Cruz replied that “It’s focused on the wrong objective.”

GOP Sen. Ron Johnson of Wisconsin meanwhile, complained about his leadership: “I have no idea what they’re thinking.”

In a move that’s confused senators on both sides of the aisle, McConnell took procedural steps last week to set up a “shell bill” designed to put Democrats on record about a range of unemployment insurance benefit proposals. But he has yet to bring any amendment votes to the floor.

McConnell signaled Wednesday that a deal may still be far away and said the Senate will stay in session next week, delaying the August recess..

Meadows indicated on Wednesday that if there was no deal by Friday, “There’s no sense to continue” — a view some Republicans share.

“At some point you have to set a deadline or just continue this kabuki dance every day,” said Sen. Roy Blunt (R-Mo.). “The process sometimes is not what you anticipate, particularly if you’re 90 days from a presidential election.”