Iain Dale on charities’ DEPENDENCE on conservatives: ‘Would NOT exist without the Right’ 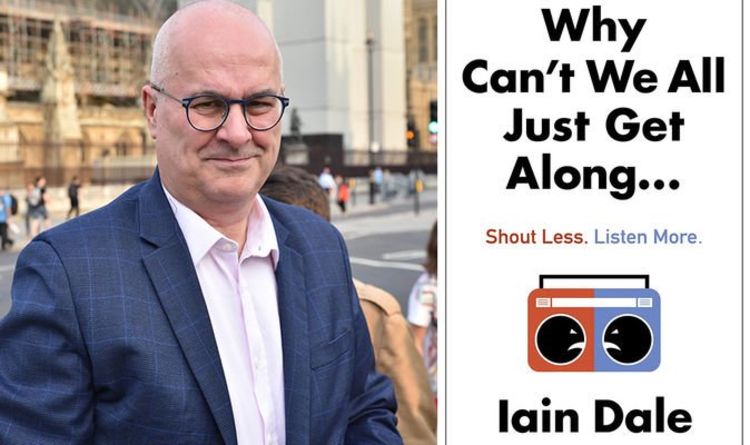 After years interviewing politicians and debating callers, LBC political commentator Iain Dale has experienced both sides of the argument on many different issues. But what he can’t stand is when people with differing views cannot have a tolerant and respectful discourse. The former Conservative MP candidate has written a new book called Why Can’t We All Just Get Along?, expressing a better vision for how we should treat those we disagree with.

On the arguable observation that those on the Right today tend to be more tolerant generally of those on the Left than vice versa, Dale said: “Most people think it’s the other way round!”

“Those on the ultra-Left and ultra-Right, those are the intolerant people.

“The vast majority of people are somewhere in the middle.

“And if you look at the charity sector, charities would not exist without the active support of people who would describe themselves as conservatives.”

“But they kind of see the state as the means of changing things rather than charity.

“There are some people on the Left who think charities shouldn’t exist; that it should be the state that provides everything.”

Asked why he decided to write Why Can’t We All Just Get Along?, Dale said:

“I got frustrated about the level of public discourse and just how people talk to each other; either on the internet or in mainstream media.”

The Brexiteer continued: “I just don’t happen to agree with it. But if I didn’t have a conversation with Remainers, how could I begin to understand them?

“I’ve never seen anything like the Brexit debate in my life, where you literally have 64 per cent of Remainers who do not want their son or daughter to go out with a Brexiteer.

“Now I find that ludicrous. The figure on the Brexit side was 11 per cent and that’s too high.

“It’s all tribal. If people aren’t in your tribe, they’re the enemy. That’s a really dangerous place, I think, for our society and media to be.”

THIS book makes for excellent light reading. The main protagonist is 39-year-old Josie Bordelon, who finds that her semi-charmed life as the most sought-after...
Read more
Entertainment

The next big Fortnite update is arriving today and will be downloadable across all major platforms, including PS4, Xbox One, Switch and PC. The only...
Read more
Entertainment

The average adult has not had their appliances serviced by a qualified engineer in more than 18 months – despite a fifth believing they...
Read more