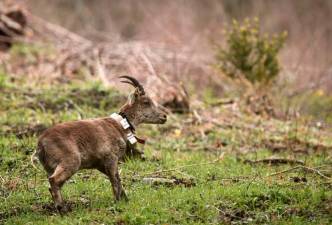 WITH a bumper litter of new kids, the recently introduced ibex population in the French Pyrenees is thriving more than a century after the native species of wild goats was wiped out in France.

Officials have counted 70 newborn ibex this year at the Pyrenees National Park (PNP) and nearby Ariege Regional Park in the craggy mountains that separate France and Spain.

The French population now stands at some 400 animals, though they are not the original Pyrenean Ibex, the last two of which in France were shot and killed in 1910.

The Pyrenean Ibex became totally extinct in 2000, when the last known female was found dead on the Spanish side.

The new goats are Western Spanish Ibex, another subspecies of the Iberian Ibex that began to be brought over from a Spanish reserve in 2014.

Recognisable by their long, curving horns, the ibex can easily scamper up cliffs in search of grass, leaves and moss.

“In relation to the initial goal of establishing a viable core population, for now we can say the operation has been a success,“ Jerome Lafitte, head of fauna operations at the Pyrenees park, told AFP.

For Matthieu Cruege, director of the Ariege park: “These are majestic animals, and it really is exciting when you’re able to see them. The ibex really adds to the mountain tourism industry.”

New introductions are planned this fall in the Aspe valley closer to the Atlantic Ocean, while next year officials will attempt to diversify the genetic pool by adding ibex from other areas.

“We’ll have to wait another 30 years to see ibex all across the Pyrenees,“ said Jean-Paul Crampe, a member of the PNP’s scientific committee.

“It’s a popular species – and it’s much easier to re-introduce than bears or wolves,“ he said.- AFP