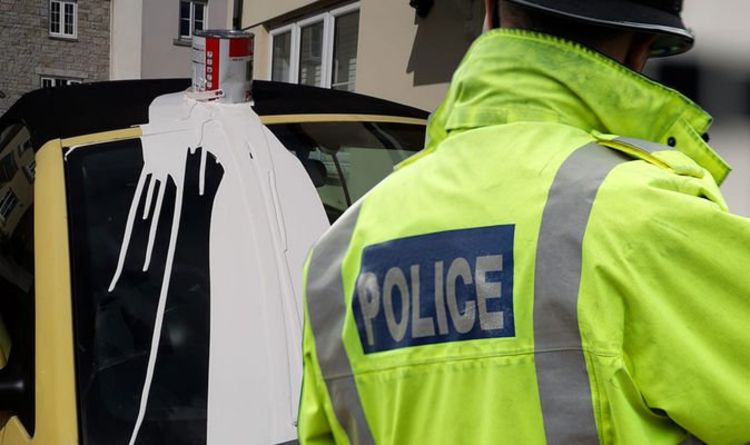 The UK has been in a strict lockdown for over three weeks and Britons were urged over the Easter weekend not to travel to second homes to halt the spread of the deadly virus. But, one woman, has claimed she has been the victim of an attack after her son, who has an autoimmune disease, moved into her neighbour’s holiday home to self-isolate – after returning from abroad.

In a picture posted on Facebook, Sue Skyba, claimed paint had been poured on top of her car and “assumed people thought it was someone on holiday”.

Sue, 63, who was staying in the house near St Austell, Cornwall said: “This happened to my car last night I can only assume people thought it was someone on holiday.

“My son has an autoimmune disease and my neighbour has kindly let him move into his holiday home as we have to self-isolate due to returning from abroad.

“I parked the car outside the house, this happened in Duporth.”

Sue added: “We got home and had to self-isolate and, of course, were a possible risk to Philip’s health as he’s on immunosuppressant drugs, so our neighbour kindly let him move into the holiday home his family often stay in.

“Signs have appeared in the village saying ‘visitors stop spreading the virus’ so I think someone thinks that there are visitors in the holiday home.

“I’m really angry because I have two jobs, neither of which I can do – I help look after holiday homes, which are obviously closed, and I work in Asda, but can’t at the moment because I’m isolating. So I can’t work to pay for the repairs on my car.”

One person simply wrote: “This is disgusting”.

Another added: “The idiot vigilantes are everywhere. Disgusting! Report to police and ask if anyone has CCTV.”

A third added: “Really!! People need to stop assuming! So sorry this happened to you.”

The report of the shocking incident comes as Britons were urged not to travel to holiday homes over the bank holiday weekend in fears of the spread of coronavirus.

New figures from the National Police Chiefs’ Council show 169 ‘failure to comply’ tickets were served in Devon and Cornwall.

Across the country, a total of 3,203, fines for alleged breaches of the coronavirus lockdown were handed out in England from March 27 until April 13.

Police have faced some criticism for the way they have handled the coronavirus crisis and implemented the government’s strict rules so far.