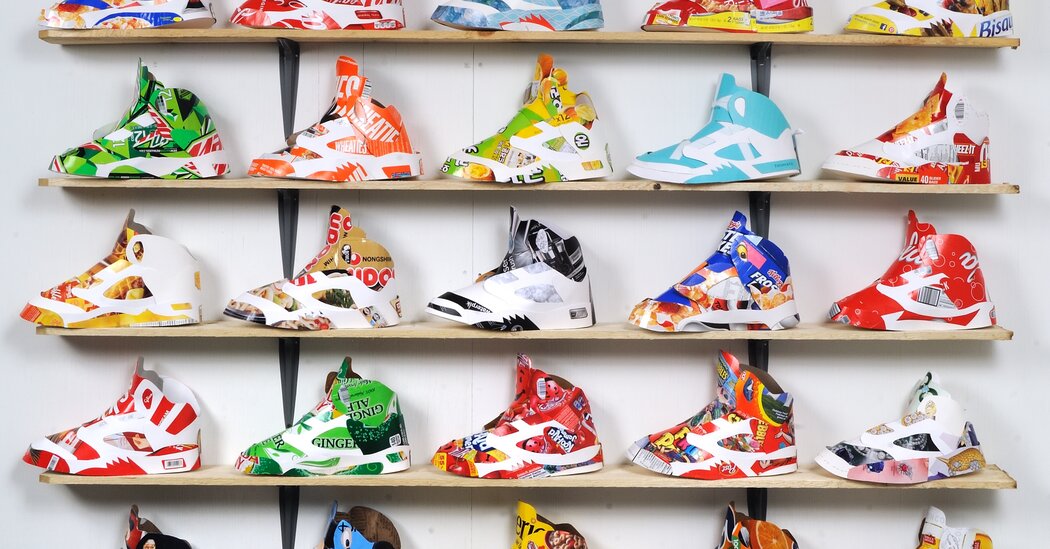 It seemingly happened so long ago that the event has assumed elements of urban legend — the saga of the Great Sneaker Spill.

Sometimes referred to as the Great Shoe Spill, the tale recounts an event on May 27, 1990, when, during a sudden violent storm in the North Pacific, five shipping containers were swept off the deck of the freighter Hansea Carrier somewhere between Seoul and Seattle.

Of the 40-foot steel boxes that broke loose and crashed into the ocean, one sank to the bottom and four broke open to spill out a stream of contents that included computer monitors, sex toys and 61,280 Nike sneakers destined for America’s basketball courts and city streets.

The incident went on to become a parable of environmental disaster, as well as a red-letter event in the history of sneakerheads. For months, the buoyant flotilla drifted, carried by wind and currents until, in early 1991, beachcombers reported coming upon batches of the sneakers off Vancouver Island in Canada, pushed north on the Davidson Current. That spring, driven southward by opposing breezes, more of them turned up along the coastlines of Washington and Oregon.

The Great Sneaker Spill might have gone unremembered had it not been for the enterprising scavengers who washed and resold the flotsam and Curtis Ebbesmeyer, an oceanographer who, alerted to the spill’s existence by his mother, later used it as the basis for a study of little-known currents. That bit of science earned Mr. Ebbesmeyer the sobriquet Doctor Ocean and, for a time, a guest spot on the couches of late-night talk shows.

Early this year, Andy Yoder, an artist in Washington, D.C., who specializes in repurposing everyday objects, happened upon the legend of the Great Sneaker Spill and decided to commemorate it as a means of highlighting the continuing degradation of our marine environment. Creating 250 Nike replicas from recycled trash, Mr. Yoder then arranged them on store shelves in an immersive installation, “Andy Yoder: Overboard,” that went on view on Oct. 24 at the Brattleboro Museum & Art Center in Vermont and also online.

Reached by phone at his studio in northeast Washington, Mr. Yoder, 62, spoke about the Great Sneaker Spill and how it first drew him in. Here are edited excerpts from the conversation.

What about this event resonated for you?

I’d been offered the chance to make a proposal for a show by the arts program CulturalDC. CulturalDC has a mobile art gallery in a reconditioned shipping container, and I immediately got interested in the containers themselves. When I started researching, I came across the incident of the Great Spill.

There is so much I did not know. There are millions containers going around the world at any given time, and, surprisingly, things fall off boats routinely. Though I am very pro-environment, I think we’ve been preached to enough about the effects we as humans have on the planet, so I wanted to do a project that brought attention to the issue in a way that wasn’t preachy.

Were you a sneakerhead?

Not at all. When I first moved to New York in 1984, I was a nerd from suburban Cleveland, dropping into the downtown art scene in what was this great, transformative experience. I remember seeing Keith Haring outside the Pop Shop, all in black and wearing high-tops and feeling like I had arrived.

My first job out of art school was as a studio assistant to the artist Red Grooms, and it felt like such a great time downtown — with the East Village art scene, CBGB, the Palladium, all this art, music and culture that shared this contagious creative thrust. The city was so open.

I wonder if you could say the same today.

It’s hard for me to know. I lived in New York for 18 years and then had three little kids, and that led to eight years of living in Vermont.

I live in D.C. now, but I still remember the New York of the ’80s as a heady time. My first show, thanks to the curator Bill Arning, was at White Columns on Spring Street. You would see Jim Jarmusch and David Byrne just walking around the East Village. A good friend was an artist who built all the installations at Area. Artists could pick up work so easily.

There were fewer fixed boundaries then. People worked across all sorts of disciplines.

Sneakers also cut across boundaries. They cross over into so many demographics of color, race, class, age. That made them the perfect vehicle for a project like this. They’re instantly relatable. That was something I’ve always liked in art — the way Keith Haring, for instance, wanted his work to be accessible to everyone.

The Great Sneaker Spill is certainly accessible. It’s also like a kind of meta-installation piece.

It’s such a fascinating story. The oceanographer who started to follow the sneakers used them to collect all this data that led to an important study of ocean currents. It turns out they float. Their shape made them aerodynamic. The left shoes went one way, and the right shoes went another.

Maybe. But Curtis Ebbesmeyer became this phenomenon on the late-night talk shows. The story went viral, as much as anything could in 1990.

Do you know what specific sneakers were in the spill?

I don’t know which ones fell into the ocean. But the shoe I modeled my pieces on is the Air Jordan 5, which was this iconographic shoe introduced in 1990, the same year as the spill. It’s an amazing combination of form and function, composed of overlapping shapes that wrap around the piece. It’s a high-top with a streamlined ice-cream sundae quality.

There is a shark’s tooth and a zigzag lightning bolt on the side of the sole, kind of like Buzz Lightyear meets Giorgio Armani. Initially I was making all of the sneakers white, but I quickly realized I wanted to celebrate this cornucopia of sneakers we have now.

While underscoring our ecological dilemma.

The objects themselves are pleasing to the eye, automatic eye candy. But every one is basically made of stuff I pull out of recycling bins. Once people are drawn in by the visuals, I can gradually make them aware of the …

I present it as straight as possible. I ordered Air Jordans on eBay and then reverse-engineered them to make the template. They’re installed on a wall in the same way they would be in a sneaker store. You only gradually become aware that the objects are made from boxes, things you’d recognize from the grocery aisle.

Your eyes are presented with this grouping, this eye-jangling assortment of junk from consumer culture, and gradually you realize what’s going on, because it’s not just the shoes. There are also walls with a digital mural of ocean waves and one that shows the containers, and slowly you begin to draw the connection.

As a practical matter — Covid aside — isn’t dumpster diving kind of iffy?

For me it’s like diving for pearls. I go to these apartment complexes and make the rounds of their outdoor recycling bins, and, admittedly, I find lots of ordinary stuff — Heinz mustard bottles, Häagen-Dazs containers, Krispy Kreme boxes. But I also find all of this great packaging, like Tiffany boxes, Hermès bags, along with Bruce Lee posters and packaging from Asian food products with amazing graphics that people have put a lot of thought into.

I mean, I won’t take stuff that’s really funky, but generally I tend to go for it. I wear a mask. I wear gloves. So far I haven’t gotten cooties.

ByRuth La FerlaWith the New York charity circuit on hiatus, here is how some philanthropists and society figures are spending their time and resources...
Read more
Fashion

ByJodi LevineThis Thanksgiving, whether you’re hosting guests or sharing a meal via Zoom, it’s worth the effort to dress up your table to make...
Read more
Fashion

ByNoel MurrayWe’ve reached that time of year when the small screen is filled with Christmas movies, populated by happy folks in coats and scarves,...
Read more
Fashion

ByVanessa FriedmanA few months ago, back when most live fashion shows got canceled because of the coronavirus pandemic and digital shows took their place,...
Read more
Fashion

ByVincent M. MallozziDuring the most painful and difficult days of Daniel Tomanelli’s life, he continued to take care of Audrey Pence. “He’s lying there in...
Read more