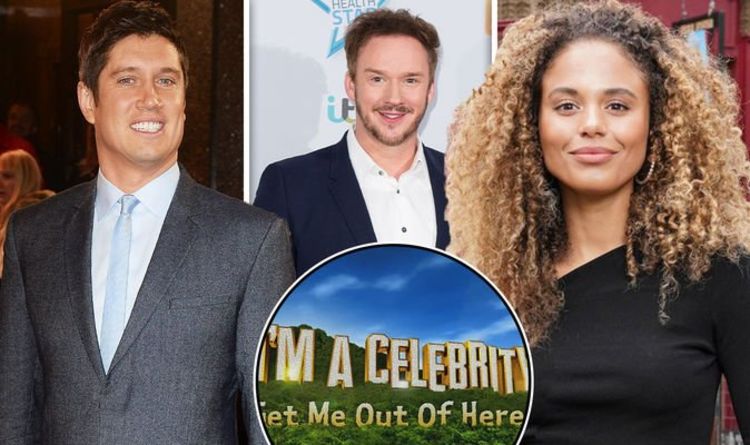 ITV viewers have been waiting patiently for this year’s 20th-anniversary series of I’m A Celebrity… Get Me Out of Here! which will be shunning the Australian jungle for the UK countryside for the first time ever. And as fans continue to speculate over who will be appearing on the programme this year, it’s thought the first eight stars for the show have been all-but-confirmed after a number of famous faces were seen appearing to arrive for a photoshoot ahead of the programme’s start-date next month.

The rumour-mill has gone into overdrive in recent weeks as talk of which famous faces might be on the billing has only grown.

However, it looks as though viewers won’t have to wait much longer to find out who will be entering the makeshift jungle this year.

Snaps were released appearing to show a selection of well-known names attending a top-secret photoshoot in the capital.

Stars who can be seen arriving include operatic tenor Russell Watson and TV veteran Vernon Kay.

In photos obtained by The Sun, others who can be seen arriving include BBC favourite Victoria Derbyshire and Coronation Street legend Beverley Callard.

“This year’s collection of celebrity contestants are shaping up to be nothing if not eclectic, with the latest signings,” a source told The Sun.

Express.co.uk has contacted a representative for I’m A Celebrity… Get Me Out of Here! for comment on the speculation.

“Hello, Kev it’s us. We’re on our way to camp but we’re a bit lost,” he remarks before Dec goes onto quiz his host on what Kiosk Kev has told him.

“He said, ‘According to a recent survey, what percentage of people stay in their pyjamas all day at the weekend? Is it A 23 percent or B, 29 percent?”