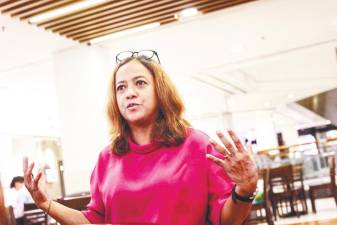 PORT Dickson-born, Kuala Lumpur-raised author Geetha K. went to London in 2014 to take a six-month-long memoir writing class, conducted by the Guardian newspaper in partnership with the University of East Anglia. Six years later her debut novel, The Seat, has finally hit bookshelves.

The plot of the book takes readers through events of Malaysia’s 14th general election, seen through the eyes of its protagonist, Satya, who spent her childhood years in Segambut Dalam, now rebranded as Mont Kiara.

The book draws from Geetha’s own experiences growing up in a village in Segambut Dalam, once defined by its landmark railway line and rivers.

“I never thought I would be writing a novel,” says Geetha, who had taught English for more than two decades before switching careers to become a writer-cum-editor for a lifestyle magazine for eight years.

The Seat is categorised as historical fiction, contained in slice-of-life episodes, with concepts of expectation, disillusionment and hope, and it depicts the harsh reality facing the protagonist and the hometown that she holds dear.

With Geetha’s own childhood memories of her past playing such a big role, one would have expected The Seat to be a memoir, but that was not the case.

Instead, Geetha chose to write fiction, because she wanted the creative licence and freedom to explore her characters and to pump more life into her plot for a more exciting narrative.

Geetha admits to inserting memories from her childhood years into the novel, but she insists Satya is not her alter ego.

“Satya is purely a work of fiction,” she says.

“My growing up years were far less dramatic than hers. As an author I have dug into my own experiences and memories of Segambut Dalam, of which I have been a native all my life, however, the characters and events are works of my imagination and very distant from being a memoir.”

During the course of writing the book, she paid several visits to the particular area where she had spent her childhood years.

“There was a time when kampungs and clean rivers co-existed with KL’s city image,” she says.

“Seeing the sorry state of the rivers in Mont Kiara (what used to be Segambut Dalam) was when I knew I wanted to dedicate my novel to the dead and dying rivers of my childhood.”

She hopes her attempt at recapturing the beauty of her childhood years in Segambut will encourage the authorities to take initiatives to prevent further destruction to the place.

“Instead of malls and [retail outlets], we could perhaps focus on nature reserves and libraries,” she says.

She also hopes Mont Kiara residents will pick up this book for a better understanding of the past glory of the very soil upon which their high-rises stand today.

“I also hope The Seat inspires other Malaysians to write about their own ‘good old days’, and leave behind the memories of disappearing Malaysian landscapes and ideals,” she says.

Unsurprisingly, the idea for The Seat was sparked during Malaysia’s epic 2018 general election. Like the faithful masses that followed the developments in the Malaysian political landscape, Geetha too dutifully attended ceramahs to hear political leaders speak.

“I listened, cheered and hoped,” she remembers.

As she kept hearing her potential MP talk about Segambut’s history, it triggered a chain of memories of a distant time, in the very heart of the Segambut constituency where she grew up.

“Segambut then represented a vastly different demographic, geography and ideal,” she explains. It was then that she decided to use her memories of Segambut as the background setting for her novel.

Geetha also dedicates The Seat to her father and her daughter. Her father, for being the book’s biggest source of inspiration, and her daughter, whose generation she hopes will benefit from it.

“I’ve always known that if my father hadn’t been brave enough to leave his familiar estate background to come to KL, our fates would not have been the same.

“He didn’t have much education or money and was practically a stranger to the city, yet made that move at an early stage of his life, to give himself and his family a better chance at life.”

“My father is a totally self-made man and he also brought many of his friends out of the estate environment,” says Geetha, who has an older brother and a younger brother.

“My father worked in the hotel industry for many years, and that’s where he learned to speak English and probably understood the value of the language.

“He wanted his three children to have a good education and made sure we were enrolled in mission schools.”

She is currently working on her next book, a series of short stories centred around the Covid-19 pandemic, involving Malaysians from all walks of life.