In Arizona, Trump has a redo of his Oklahoma rally 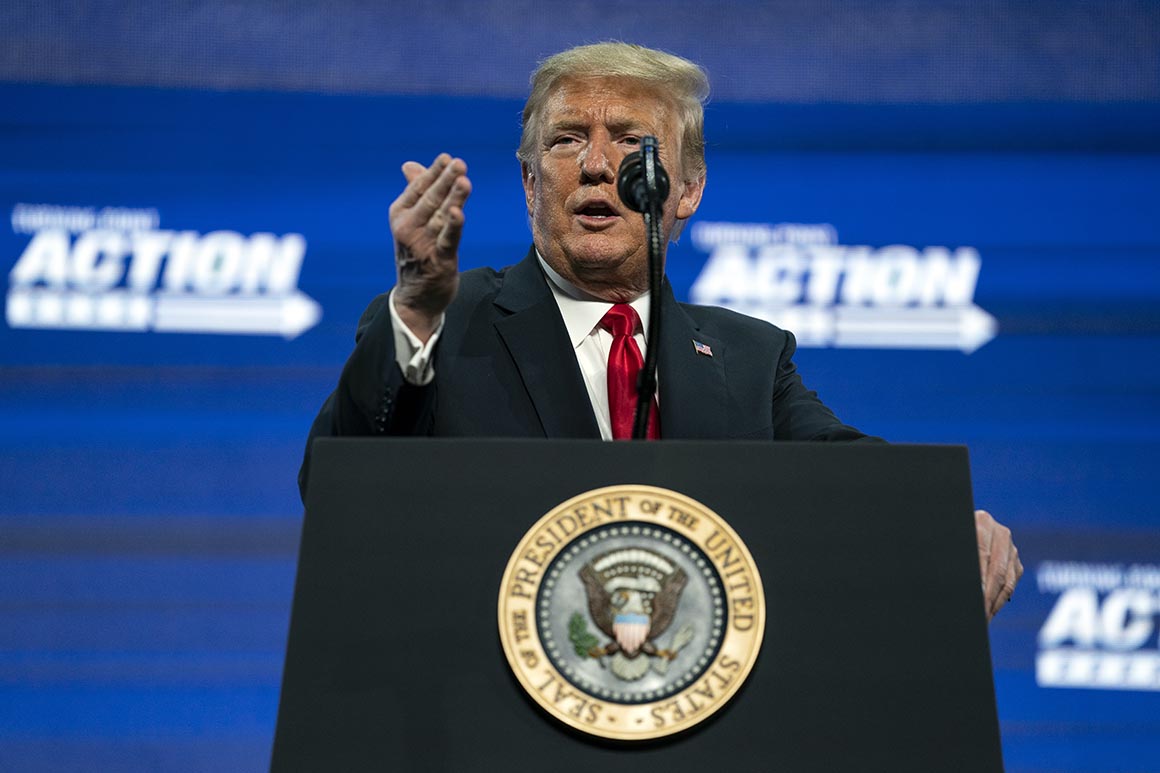 The coronavirus is out of control in the Grand Canyon State after its governor lifted a stay-at-home order last month, and the president is polling relatively poorly here against his presumptive Democratic rival, former Vice President Joe Biden.

Low attendance at Trump’s event in Tulsa, Okla., on Saturday (only 6,200 of the venue’s 19,000 seats were occupied) made headlines and overshadowed the president’s comeback message. But on Tuesday, he recast that rally as a roiling success, calling it the “number one show in Fox history for a Saturday night.”

Trump started 10 minutes early — uncharacteristic for a president who routinely begins rallies as much as an hour late. His appearance came as Fox News was airing an interview with the president’s former national security adviser John Bolton, whose tell-all book of his time in the White House makes damning accusations of corruption by Trump. Trump and his administration have condemned the book and tried to block its release.

Speaking to the young audience, Trump tapped into campus culture wars on free speech to draw a divide between his supporters and protesters fighting against racism and police brutality following the death of George Floyd, an African American man, at the hands of a white police officer in Minneapolis.

Trump declared the students in the audience as the cultural defenders of not only his movement but also of American values as a whole, portraying Democrats as intolerant and “totalitarian.” He applauded the student activists in the crowd “who stand up for America and refuse to kneel to the radical left,” bashing the mainstream media and accusing “vicious” Democrats of stifling dissent but — and without evidence — accusing them of letting anyone vote, “even if they’re not citizens.”

The president condemned the removal of monuments for slave owners and Confederate leaders as a destruction of American history. He called the audience “smarter” than Democrats, who he said require “absolute conformity.”

“They hate our history, they hate our values, and they hate everything we prize as Americans,” the president said. “Our country didn’t grow great with them. It grew great with you and your thought process and your ideology. The left-wing mob is trying to demolish our heritage, so they can replace it with a new oppressive regime that they alone control.”

The president celebrated the thwarting of an attempt to pull down a statue of Andrew Jackson in front of the White House on Monday evening, repeating his frequent new line of being a “law and order” president.

“If you give power to people that demolish monuments and attack churches and seize city streets and set fire to buildings, then nothing is sacred and nothing is safe,” Trump said. “We stopped them last night.”

Protesters have been targeting monuments dedicated to historical figures that have advanced slavery or colonialism, asserting they are better remembered in history books and museums than celebrated with memorials.

But Trump characterized their attempts as effacing history, telling the crowd: “The left are not trying to promote justice and equality. [They are in] the pursuit of their own political power.”

The president repeated a claim he made on Monday night that those who deface public monuments would receive 10 years in prison, according to the Veteran Memorials Preservation and Recognition. The act actually caps punishment for defacing memorials for service members on public land at either 10 years in prison, a fine or both.

A debate is raging here among the political class over whether the scene inside the church, which is separated from the city’s commercial districts by massive parking lot, suburban subdivisions and a nature preserve, is merely a mirage in the sandstorm swirling all around it.

Tuesday was another record day for new Covid-19 cases and hospitalizations in Arizona, as public health authorities struggle to get the virus under control and avoid another shutdown, which would hammer an economy that has been slowly rebuilding in recent weeks but remains fragile.

The state reported 3,591 new cases, nearly doubling its daily case count from last week, and 42 related deaths. And hospitalizations exceeded 2,000 for the first time since the pandemic began.

When he mentioned what he called “the plague,” the president dismissed it: “It’s going away,” he said.

“What a job we’re doing with testing. We did ventilators,” Trump said, attacking “the fake news people” for what he called misleading the public about how bad the situation is.

“We’re going to have a vaccine very soon,” he promised.

Later in the speech he made fun of the disease and its various names to rousing applause, including referring to it with his new xenophobic moniker, “kung flu.”

He took a jab at House Speaker Nancy Pelosi, who he said had danced “in the streets of Chinatown in San Francisco, long after I banned China from coming here,” in a reference to his travel ban on foreigners from mainland China at the height of the coronavirus outbreak. San Francisco’s Chinatown was founded in the 19th century, and many of its residents have families who have lived in the United States for several generations.

The November presidential election is the battleground for the future of the country, Trump said. The president charged his audience to get him reelected so they can defeat what he portrayed as the threat to America of a Democratic victory.

“This is the choice of two futures,” he said. “The left’s vision of disunity and discord, or our vision of equal opportunity and equal justice.”

The president included unsubstantiated claims of voter fraud via mail-in voting, claiming Democrats were trying to rig the election. Democrats have argued for more mail-in voting to prevent large crowds in polling places during the coronavirus pandemic.

Trump has previously told POLITICO that mail-in ballots are “my biggest risk” to reelection, and Republicans are fighting a legal battle to bar the expansion of voting options amid the pandemic. Most Arizona voters vote by mail.

The ebullient scene in the church obscures what many see as an uphill battle for the president to hold on to a state that is seen as critical to his reelection.

“Arizona has been one of the most rabid constituencies for Trump,” said Barrett Marson, a political consultant who advises Republican candidates. “It may not be the largest, but it is certainly some of his most rabid fans. But as we have seen, it doesn’t translate necessarily into support at the polls. Whether it’s more than 50 percent is another question.”

Kirk Adams, a former state representative and chief of staff to the state’s Republican governor, Doug Ducey, one of Trump’s favorites, predicted that “it’s going to be a close race. I just don’t think there was any way around that Arizona is up for grabs.”

He pointed out that even the president’s victory here in 2016 was much closer than other Republican presidential candidates in recent elections.

“The president only beat Hillary Clinton by three points,” Adams said. “When you compare that with other statewide candidates … he clearly underperformed.”

But other GOP players in the state contend the president still remains in a strong position.

“It’s hard to look at the polls and make any real sense,” said Schweikert, who was recognized by Trump in the Tuesday crowd.

He cited some of the more modest neighborhoods in his district.

“They’re not neighborhoods where you would expect to find many Republicans,” he said. “Go drive through them and look at the number of Trump flags. The constituencies for this president are different. You find Trump support in areas where it’s not about a typical Republican-Democrat, right-left. It’s more the populist anger.”

“We have over two million voter contacts,” said Keith Schipper, the campaign’s regional communications director responsible for Nevada and Arizona. “Contrast that with Joe Biden, who just hired his first two staffers last week. They are parachuting in to try to build these relationships. Arizona voted for the president in 2016 and it’s going to go for him again in November.”

But Adams, the former chief of staff to Ducey, said he didn’t think Biden needed much of a presence to compete with Trump here.

“I don’t think it matters that the former vice president hasn’t established much of a ground game here because, frankly, he’s not going to need it,” he said. “This election is a referendum on Donald Trump.”

Moreover, he said, the former vice president “will be able to borrow from the significant ground game that the Democrats and Democratic-aligned groups have already established in the state. And that they’d been building, really, for the last three or four cycles.”

Marson, the GOP political consultant, added: “People are talking about how Arizona is purple. I totally disagree with that, but Trump is making it.”