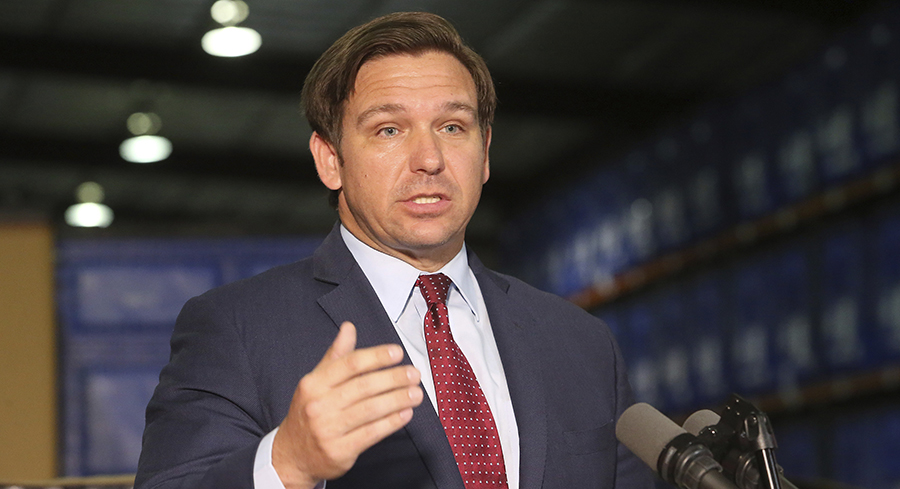 TALLAHASSEE — Florida Gov. Ron DeSantis is resurrecting a Trumpian style that served him on the campaign trail but has been dormant since taking state office.

Emboldened by a flattening curve of coronavirus cases in Florida after weeks of national ridicule, the Republican is tapping his inner Trump after serving his swing state as a kinder, gentler leader with a soft spot for teachers and the environment.

In his first 16 months as governor, he won an uneasy truce with Democrats and his approval ratings soared. But the political pressures of the coronavirus pandemic have roused the campaign-trail DeSantis, a defensive partisan with a Trumpian bone to pick with his perceived enemies, including Democrats and the media.

This week, DeSantis has devoted his coronavirus briefings to complaints about unfair treatment and he’s returned, after a long absence, to the friendly airwaves of Fox News to lash out at the “Acela” media.

For weeks, Florida was beset with ominous forecasts that its pandemic response — or lack thereof — would lead to high rates of infection and death and overwhelm the health care system.

Public health experts continue to urge caution, but, for now, Florida’s coronavirus reality has not lived up to its dire expectations.

“Those predictions were made time and time and time again, and they were wrong,” DeSantis told reporters Tuesday in a full-throated, sometimes petulant defense of his policies. “What we have done has worked.”

During that 20-minute appearance, DeSantis clashed with members of the press in ways that were reminiscent of his 2018 campaign, a departure from how he’s governed since taking office.

“A lot of the [coverage] was politically motivated. A lot of these outlets have clear agendas,” he said. “We are going to show Florida did better than any of the projections.”

DeSantis this week also returned to Fox News, where he once was a former mainstay. He has largely avoided the outlet since taking office.

On "Fox & Friends" Tuesday morning, DeSantis blasted the “Acela media,” a nod to the negative press he drew by not closing beaches or instituting a stay-at-home order after most governors had. Critics had painted DeSantis as slow-moving and ham-handed.

A day later, DeSantis was back on Fox touting his successes.

“We did way better than the experts said we would, and I think we did it with a smart, data-driven approach,” DeSantis told Sean Hannity Wednesday night. "What we have done has worked."

As DeSantis spoke to Hannity, visualizations drawn up by his office flashed across the screen. One showed Florida’s hospitalization rate at 10.3 per 100,000 people, far lower than states like New York and New Jersey.

“Clearly there has been a tone shift, he is punching back at the media and partisans who criticized him for not closing the state sooner and for opening beaches,” said Nick Iarossi, a lobbyist and DeSantis fundraiser. “Florida has flattened the curve and is one of the most prepared states. His policies have worked.”

“This is the DeSantis that voters elected, he tells it like it is and challenges naysayers,” Iarossi said.

While some numbers point improvement, Florida is not out of the woods. On Thursday, the state had 1,300 new coronavirus cases, the biggest one-day increase since April 3. On Friday, the state’s three-day average of new positives was 979, up from 746 on April 20.

As of Friday, the state had verified fewer than 700,000 claims for unemployment benefits. Just 22 percent of applicants have received payments.

DeSantis rode into the governor’s mansion in 2018 on the heels of a primary endorsement from President Donald Trump. Partly as a byproduct of Trump’s support, DeSantis adopted an aggressive campaign style that, even in the general election, targeted talking points and strategies to base supporters, not the moderates he needed to sway.

His tone changed abruptly when DeSantis took office in January 2019. He turned his legislative focus to the environment and public education, a portfolio that endeared him even to Democrats, who were surprised to see a GOP governor giving their priorities more than lip service.

The moderate governing style drew approval ratings in the 60s and included a retreat from Fox News — at least temporarily.

“Getting him on Hannity last night was a great idea. He got to talk director to the base, his people,” Brian Ballard, a prominent GOP lobbyist and Trump insider, said Thursday. “He has been derided and made fun of, and I think he feels like he really now wants to get his message out.”

Republican Rep. Matt Gaetz, a longtime DeSantis ally, said the new approach is more a snapshot in time, not a reversal of the style of governance DeSantis has employed since taking office.

“It’s only reasonable for the governor to use national media to try and correct the record,” Gaetz said. “But in my conversations with the governor, I don’t think he misses being a regular fixture on Fox News, or the powdered makeup and lights.”

DeSantis this week assembled working groups of political and business leaders to craft recommendations for reopening the state’s economy, a decision supported by the numbers he now touts, but the meetings come as public health experts urge caution.

Even as he pushes back on the negative press, he has risked drawing more.

“If people start to go back to normal social interaction or even progressively go back, the risk transmission will go up,” Institute of Health Metrics and Evaluation Director Christopher Murray told CNN on Thursday. “The risk is very great for resurgence from these early openings.”

IHME initially forecast that Florida would have more than 400,000 positive cases, a prediction that has so far fallen way short.

Florida as of late Friday had about 30,000 confirmed cases and more than 1,000 deaths, but has beaten those early, dire forecasts.