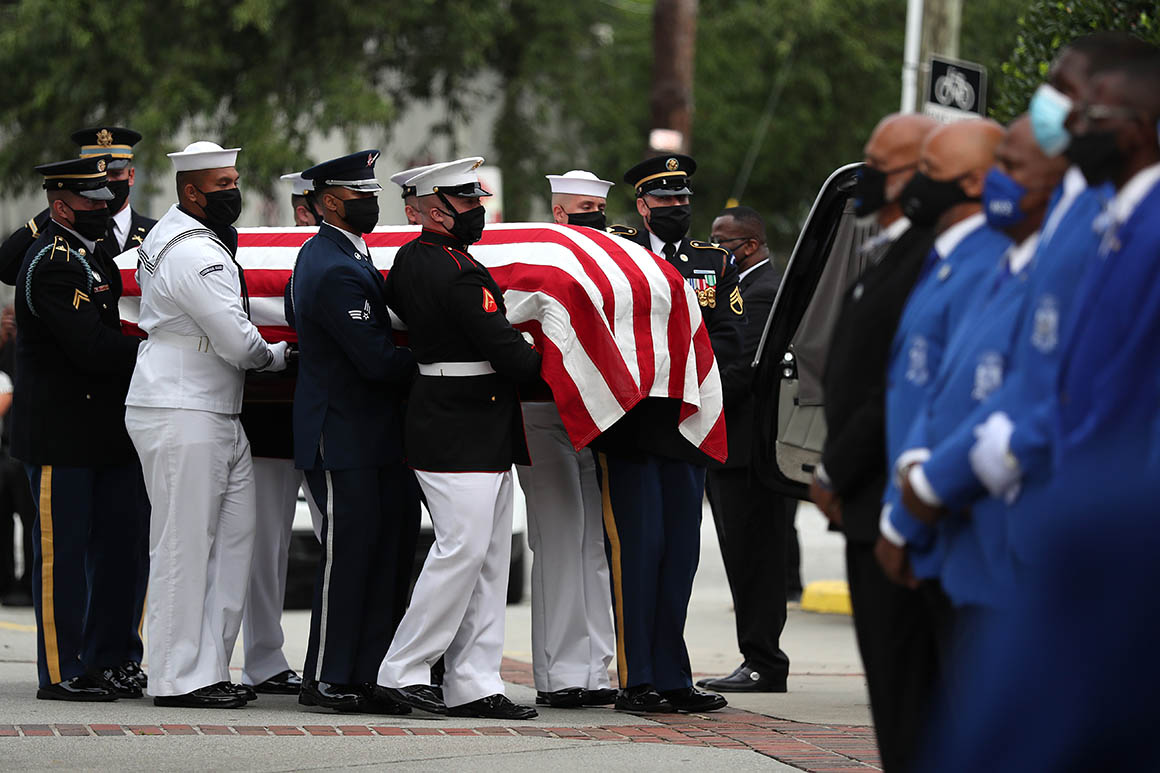 “It is a great honor to be back in Ebenezer Baptist Church in the pulpit of its greatest pastor, Dr. Martin Luther King Jr., to pay my respects to perhaps his finest disciple, an American whose faith was tested again and again to produce a man of pure joy and unbreakable perseverance: John Robert Lewis,” Obama said.

America, he added, was built by John Lewises, who as much as anyone brought this nation closer to its highest ideals. “And someday, when we do finish that long journey towards freedom, when we do form a more perfect union, whether it’s years from now or decades or even if it takes another two centuries, John Lewis will be a founding father of that fuller, fairer, better America,” Obama said as the crowd rose to its feet in applause.

The former president acknowledged that some people might feel he shouldn’t use his eulogy to dive into politics. “But that’s why I’m talking about it,” he said.

In his remarks, Obama unequivocally endorsed a series of policies on voting, including: passing new voting rights legislation to replace the 1965 law that was gutted by the Supreme Court; automatic voter registration, including for former felons; more polling places; an expansion of early voting; making Election Day a national holiday; guaranteeing citizens in D.C. and Puerto Rico equal representation in the federal government; ending partisan gerrymandering; and, if necessary, eliminating the Senate filibuster, which Obama decried as a “Jim Crow relic.”

He also lamented that too many people choose not to exercise their right to vote. “We can’t treat voting as an errand to run if we have some time,” Obama warned. “We have to treat it as the most important action we can take.”

Lewis knew that progress is fragile, Obama said, that violence, hatred and despair can rise again. And he drew parallels between today’s reality and the 1960s, linking the racism of the past to racist policies embraced by the current administration.

“Bull Connor may be gone, but today we witness with our own eyes police officers kneeling on the necks of Black Americans. George Wallace may be gone, but we can witness our federal government sending agents to use tear gas and batons against peaceful demonstrators,” he said. “We may no longer have to guess the number of jellybeans in a jar to cast a ballot, but even as we sit here, there are those in power who are doing their darnedest to discourage people from voting by closing polling locations and targeting minorities and students with restrictive ID laws and attacking our voting rights with surgical precision, even undermining the Postal Service in the run-up to an election that’s gonna be dependent on mail-in ballots so people don’t get sick.”

Democrats and local election officials have advocated for mail-in voting amid the coronavirus pandemic, which has disproportionately affected communities of color. Trump, however, has railed against voting by mail, claiming without evidence that such a process would be fraudulent.

Nearly 4.5 million Americans have been infected with Covid-19, the disease caused by the novel coronavirus, and more than 151,000 people have died in the U.S.

Obama joined two former presidents and the most powerful woman in Congress in saying their goodbyes to the civil rights icon at his funeral service.

Ex-Presidents George W. Bush and Bill Clinton and House Speaker Nancy Pelosi each shared tributes. Former President Jimmy Carter sent his condolences in a letter that was read aloud during the service.

The speakers shared tales of Lewis’ civil rights journey and lifelong activism, told personal anecdotes of marching alongside him and remarked upon how he represented the best of America.

“Only the inconquerable spirit and the magnanimous soul of John Lewis could summon us together in this place at this time,” said the Rev. Raphael Warnock, the church’s senior pastor and a Democratic candidate for U.S. Senate in Georgia. “Only John Lewis could compel three living American presidents to come to this house of God, to celebrate his life, and we are grateful that all of them are here.”

Bush acknowledged his political differences with Lewis but framed them as an inevitable effect of democracy.

“We live in a better and nobler country today because of John Lewis,” Bush said. “The story that began in Troy isn’t ending here today, nor is the work. John Lewis lives forever in his father’s house, and he will live forever in the hearts of Americans who act justly, love mercy and walk humbly with their God.”

Lewis’ funeral was the penultimate event of the six-day celebration of his life, which took the Alabama native and Georgia congressman through Alabama, Georgia and Washington, D.C. Lewis, an American hero who was brutally beaten during the “Bloody Sunday” protest in Selma, Ala., in 1965, crossed the Edmund Pettus Bridge for the last time over the weekend, lay in repose in Selma and Troy, Ala., and lay in state at the Alabama state Capitol, U.S. Capitol and Georgia state Capitol.

“I must say, for a fellow who got his start speaking to chickens, John’s got a pretty finely organized and orchestrated and deeply deserved sendoff this last week,” joked Clinton, who was referencing past speakers’ stories about how a young Lewis practiced his preaching on chickens.

“I think it’s important that all of us who loved him remember that he was, after all, a human being, a man like all other humans born with strengths that he made the most of when many don’t, born with weaknesses that he worked hard to beat down when many can’t,” Clinton said. “It made him more interesting, and it made him in my mind even greater.”

Lewis, 80, died July 17. He was diagnosed with pancreatic cancer last December. Lewis represented the Atlanta area in Congress from 1987 until his death.

The service was closed to the public, but more than 200 masked people, many of whom were family, members of Congress and other elected officials, filed into the church. Hundreds more gathered outside the church and watched the service on a screen.

Pelosi at times fought back tears as she recalled moments lawmakers shared with Lewis, who was called the conscience of the Congress.

“Every time he stood up to speak, we knew that he was gonna take us to a higher place of our understanding and what our responsibilities were and what our opportunities were, and he insisted, no matter how — shall we say offended — someone might be, that he would insist on the truth,” she said.

Pelosi compared Lewis favorably with Abraham Lincoln and said there was a double rainbow in the sky on the last day his casket was inside the U.S. Capitol, though it hadn’t rained.

“He was telling us, I’m home in heaven,” Pelosi said. “We always knew he worked on the side of the angels, and now he is with them. May he rest in peace.”

Trump is the only living president who had no role in the funeral, a distinction that didn’t go unnoticed as several speakers marveled at the number of presidents who were able to travel to Atlanta to celebrate Lewis’ life.

Trump spent Thursday meeting with the family of Vanessa Guillen, an Army specialist who was murdered by a fellow soldier after facing sexual harassment, then touring the American Red Cross national headquarters in Washington and participating in a roundtable on donating plasma. He also posted a series of tweets Thursday morning bashing mail-in voting and questioning whether the presidential election should be postponed “until people can properly, securely and safely vote.”

Trump didn’t mention Lewis in his tweets Thursday and declined to pay his respects when Lewis’ casket was brought to D.C. He did, however, tweet on July 18 that he was “[s]addended to hear the news of civil rights hero John Lewis passing” and sent his prayers, along with first lady Melania Trump, to Lewis’ family.

Though Trump was not in attendance at the funeral service, Warnock used his welcome remarks to contrast Lewis with the president, who was not mentioned by name.

“We’re summoned here because, in a moment when there are some in high office who are much better at division than vision, who cannot lead us so they seek to divide us, in a moment when there is so much political cynicism and narcissism that masquerades as patriotism,” he said to applause, “here lies a true American patriot who risked his life and limb for the hope and the promise of democracy.”

Lewis will be buried at South-View Cemetery in Atlanta.

In his own final words, Lewis told Americans who have protested systemic racism and police brutality across the country that they “inspired” him in his last days and filled him with hope for the future. He urged American citizens to get into “good trouble” and highlighted voting and participating in the democratic process as key to redeeming the soul of the nation.

“Though I may not be here with you, I urge you to answer the highest calling of your heart and stand up for what you truly believe,” he wrote shortly before his death in an op-ed published earlier Thursday in The New York Times. “In my life I have done all I can to demonstrate that the way of peace, the way of love and nonviolence is the more excellent way. Now it is your turn to let freedom ring.”