In Tributes, John Lewis Remembered As An American Hero 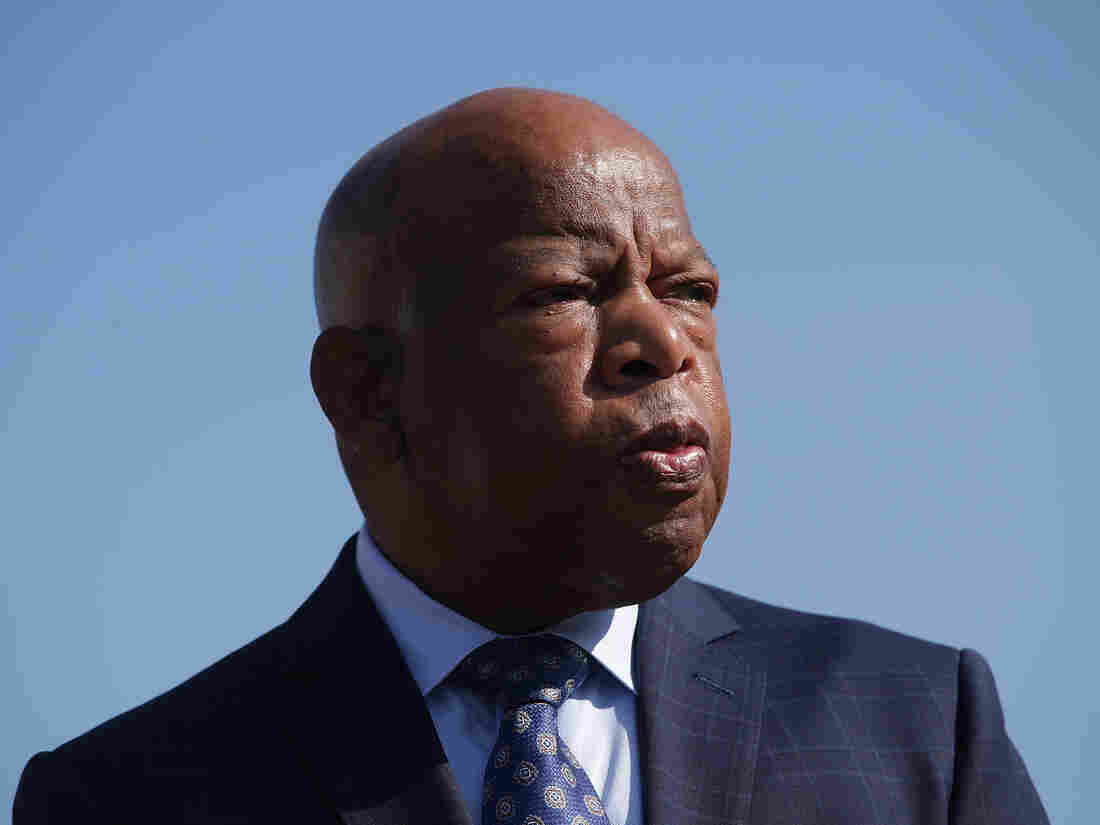 John Lewis, seen above at a 2017 press conference on Capitol Hill, was remembered Saturday for his decades of service as a champion for civil rights. Lewis died Friday at the age of 80. Alex Wong/Getty Images hide caption 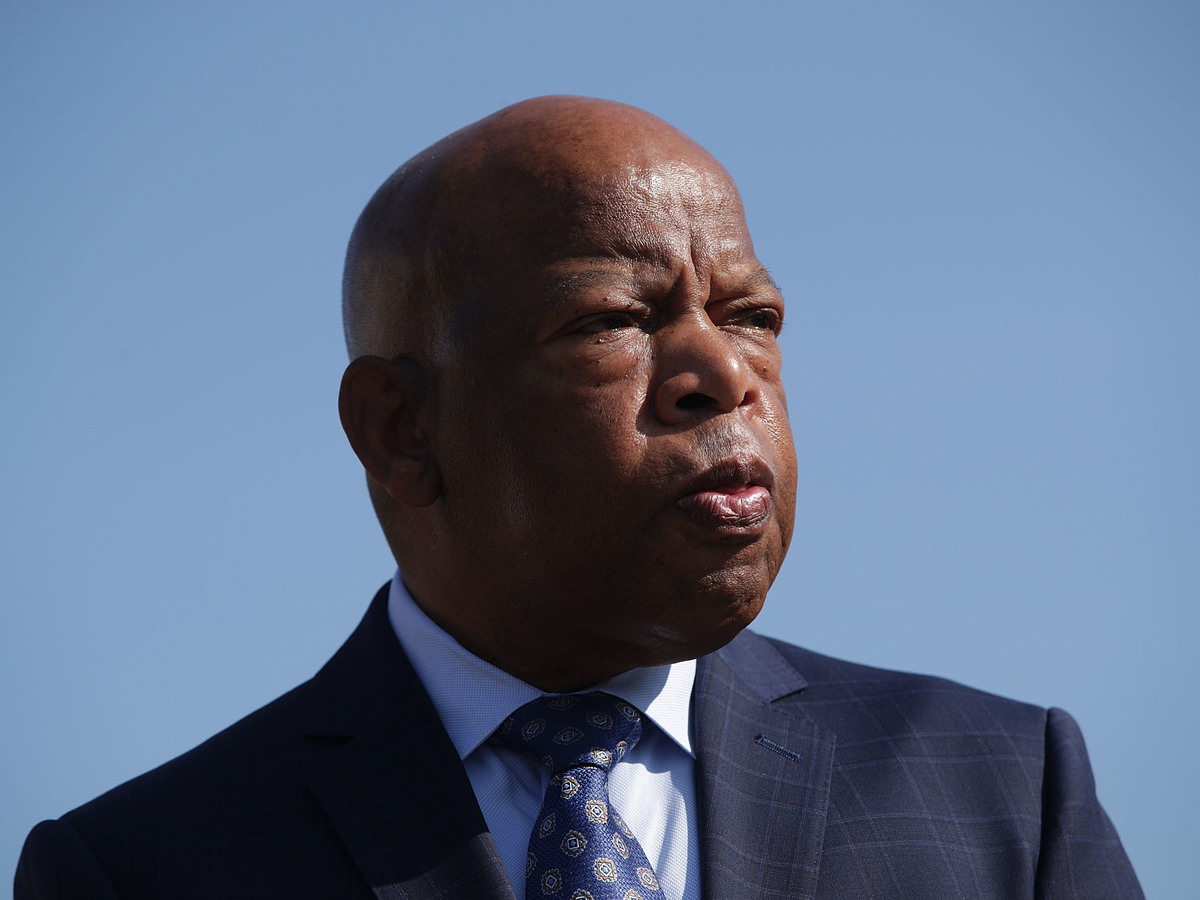 John Lewis, seen above at a 2017 press conference on Capitol Hill, was remembered Saturday for his decades of service as a champion for civil rights. Lewis died Friday at the age of 80.

Tributes poured in from across the nation on Saturday for John Lewis, the civil rights icon who died Friday at the age of 80.

Lewis rose to prominence as a young civil rights activist who helped lead the 1965 march across the Edmund Pettus Bridge in Selma, Ala. Lewis was beaten so badly by law enforcement that he was hospitalized. “Bloody Sunday,” as it came to be known, helped spur lawmakers to pass the Voting Rights Act later that year.

Lewis would go on to serve as a Democratic congressman for the state of Georgia for more than 30 years, from the late eighties until his death Friday. One of the most liberal members of the House of Representatives, he was known as the “conscience” of the Congress for his tireless commitment to civil rights.

“He was honored and respected as the conscience of the U.S. Congress and an icon of American history, but we knew him as a loving father and brother,” his family wrote in a statement. “He was a stalwart champion in the on-going struggle to demand respect for the dignity and worth of every human being. He dedicated his entire life to non-violent activism and was an outspoken advocate in the struggle for equal justice in America. He will be deeply missed.”

Lewis revealed in December that he was battling stage 4 pancreatic cancer.

Lawmakers from across the political spectrum praised Lewis on Saturday. The statements shared a common sentiment: That it is up to us to continue the work of racial justice to which Lewis devoted his life.

“We are made in the image of God, and then there is John Lewis,” presumptive Democratic presidential nominee Joe Biden wrote. “John’s life reminds us that the most powerful symbol of what it means to be an American is what we do with the time we have to make real the promise of our nation — that we are all created equal and deserve to be treated equally.”

Biden continued: “Through the beatings, the marches, the arrests, the debates on war, peace, and freedom, and the legislative fights for good jobs and health care and the fundamental right to vote, he taught us that while the journey toward equality is not easy, we must be unafraid and never cower and never, ever give up.”

Former President Barack Obama also paid his respects to the civil rights legend. “He loved this country so much that he risked his life and his blood so that it might live up to its promise,” wrote Obama, who met Lewis while in law school. “And through the decades, he not only gave all of himself to the cause of freedom and justice, but inspired generations that followed to try to live up to his example.”

Obama’s last joint appearance with Lewis came earlier this year, as they both appeared in at a virtual town hall with young activists helping to lead protests after the death of George Floyd. Afterward, Obama spoke to Lewis privately.

“I told him that all those young people — of every race, from every background and gender and sexual orientation — they were his children. They had learned from his example, even if they didn’t know it. They had understood through him what American citizenship requires, even if they had heard of his courage only through history books.

“Not many of us get to live to see our own legacy play out in such a meaningful, remarkable way,” Obama continued. “John Lewis did.”

Vice President Mike Pence called Lewis “a great man whose courage and decades of public service changed America forever.” And in a tweet, President Trump said he was, “Saddened to hear the news of civil rights hero John Lewis passing. Melania and I send our prayers to he and his family.” The president also ordered the American flag to be flown at half-staff throughout the day.

Lewis and Trump had a tumultuous relationship. In 2017 Lewis said that he didn’t consider the then-president elect to be a “legitimate” president, citing Russian interference in the 2016 election. Trump responded by criticizing the civil rights giant as “all talk” and “no action.”

In a joint statement, the president’s 2016 opponent, Hillary Clinton, and former President Bill Clinton said the world had lost a giant.

“John Lewis gave all he had to redeem America’s unmet promise of equality and justice for all, and to create a place for us to build a more perfect union together,” they wrote.

House Speaker Nancy Pelosi, D-Calif., called Lewis “one of the greatest heroes of American history,” saying he worked tirelessly to achieve the American dream of a more perfect union.

“Every day of John Lewis’s life was dedicated to bringing freedom and justice to all,” Pelosi said. “As he declared 57 years ago during the March on Washington, standing in the shadow of the Lincoln Memorial: ‘Our minds, souls, and hearts cannot rest until freedom and justice exist for all the people.’ How fitting it is that even in the last weeks of his battle with cancer, John summoned the strength to visit the peaceful protests where the newest generation of Americans had poured into the streets to take up the unfinished work of racial justice.”

Senate Majority Leader Mitch McConnell, R-Ky., described Lewis as a pioneering civil rights leader who risked his life to fight racism and live up to the ideal of equality for all.

McConnell invoked Martin Luther King, Jr.’s famous declaration that the arc of the moral universe is long, but it bends toward justice.

“Progress is not automatic,” McConnell said. “Our great nation’s history has only bent towards justice because great men like John Lewis took it upon themselves to help bend it.”

Sen. Patrick Leahy, D-Vt., said Lewis was a mentor to him on civil rights.

“John Lewis was an American hero among us, a lodestar who drew us closer to our ideals,” Leahy wrote.

“The world is dimmer this morning without Congressman John Lewis in it,” said Sen. Kamala Harris, D-Calif. “He carried the baton of justice until the very end. It’s now on us to pick it up and march on.”