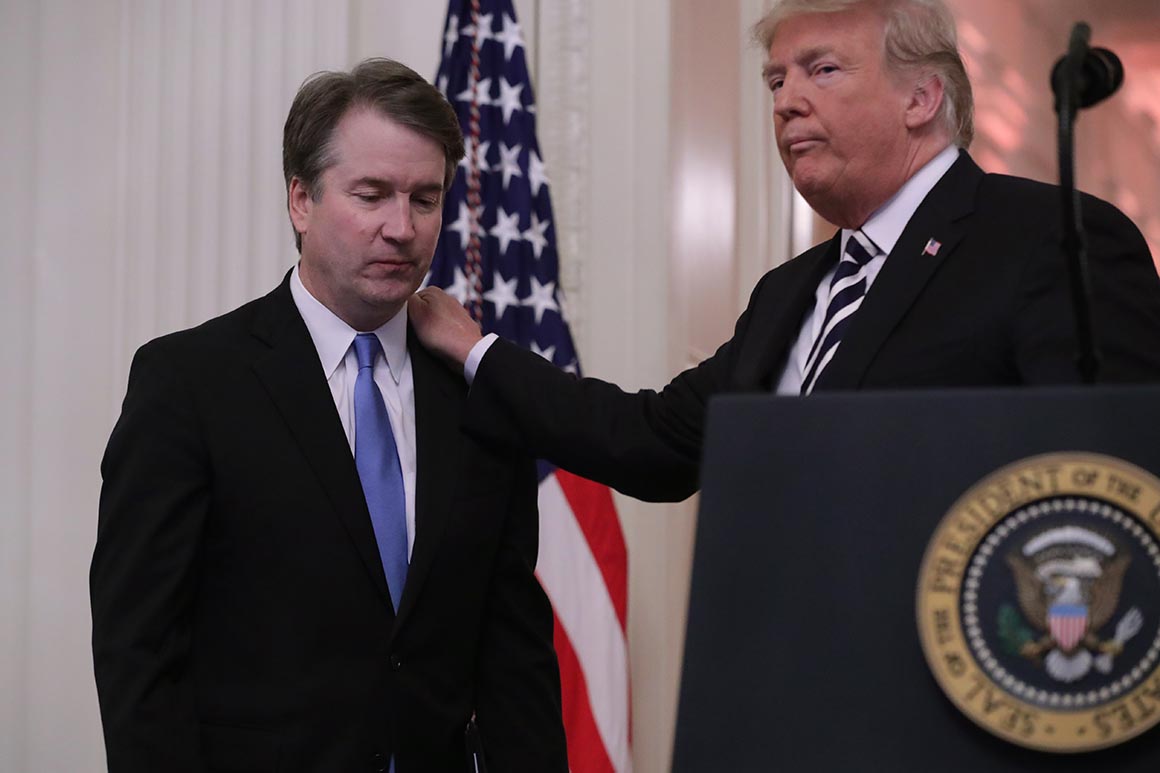 Kavanaugh also quoted a prominent law professor’s caution that allowing the election to drag out could fuel claims of foul play.

“Late-arriving ballots open up one of the greatest risks of what might, in our era of hyperpolarized political parties and existential politics, destabilize the election result,” New York University Professor Richard Pildes wrote in a June law review article about the challenges posed by this year’s election. “If the apparent winner the morning after the election ends up losing due to late-arriving ballots, charges of a rigged election could explode. The longer after Election Day any significant changes in vote totals take place, the greater the risk that the losing side will cry that the election has been stolen.”

Kavanaugh, an appointee of President Donald Trump, did not mention any prominent politicians already stoking such fears. But one is Trump himself.

Indeed, just about 10 minutes after the justices issued their decision in the Wisconsin dispute, Trump tweeted out his latest warning that any results that come in after election night should be considered illegitimate.

“Big problems and discrepancies with Mail In Ballots all over the USA,” Trump wrote, without offering evidence for his assertion. “Must have final total on November 3rd.” (Twitter labeled the post “disputed,” saying it “might be misleading about how to participate in an election or another civic process.”)

Republicans and Trump’s campaign have taken a series of legal actions to enforce ballot-receipt deadlines and are even arguing that federal law requires that every ballot counted come in by Election Day. Democrats and civil rights groups have pressed for extensions of the deadlines in various states, citing postal delays and the massive surge in people seeking to use mail-in ballots because of the coronavirus pandemic.

Justice Elena Kagan used her dissenting opinion in the Wisconsin case on Monday to deliver a tart reply to Kavanaugh’s stated fears about a drawn-out vote-counting process. She also signaled that if a legal fight erupted after Election Day, the court’s liberals would be inclined to make sure every vote was counted and would look with disfavor on arbitrary deadlines that nullify some votes.

“Justice Kavanaugh alleges that ‘suspicions of impropriety’ will result if ‘absentee ballots flow in after election day and potentially flip the results of an election,’” Kagan wrote, joined by Justices Stephen Breyer and Sonia Sotomayor.

“But there are no results to ‘flip’ until all valid votes are counted. And nothing could be more ‘suspicio[us]’ or ‘improp[er]’ than refusing to tally votes once the clock strikes 12 on election night. To suggest otherwise, especially in these fractious times, is to disserve the electoral process.”

Zach Montellaro contributed to this report.