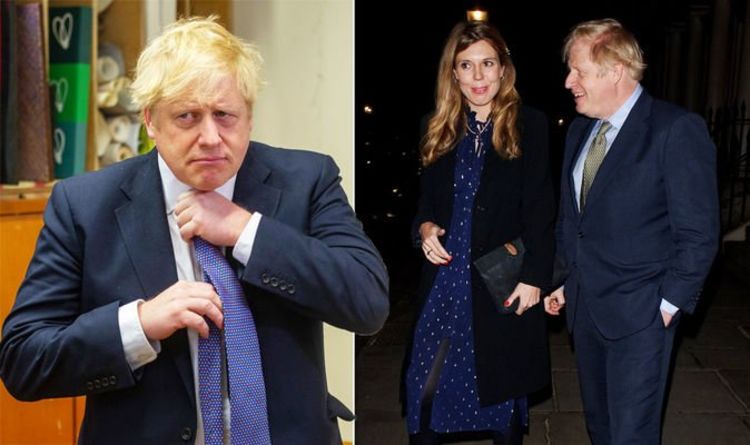 British Prime Minister Boris Johnson and Carrie Symonds revealed they intend to marry and are expecting a child just 11 months after the Prime Minister of the United Kingdom agreed his divorce deal with his second wife. The politician has told reporters he is “absolutely delighted” to be having another child.

Judi exclusively told Express.co.uk: “Prime Minister Boris Johnson tends to be a two-trick pony in terms of his body language presentation, flipping with some ease between ‘Bumbling Boris’, the bashful and often bemused-looking version of the PM who ruffles his hair and sticks out his stomach to look as close as possible to a naughty but ‘loveable’ schoolboy, and ‘Warrior Boris’, the Churchillian war-horse who flattens his hair and adopts a piercing eye and stabbing, pointed finger to win points at the dispatch box.

“The Bumbling version has been very much to the fore over the past few days, with the hair ruffled in a way that suggests a balloon might have been employed to get that extreme level of static peaking.”

While the expert claims this behaviour might be “inappropriate” for the British Prime Minister’s current responsibilities, it was a sign the pair were expecting.

She said: “The look has been inappropriate in terms of the kind of strong leadership needed over the Coronavirus cases, floods and the bullying accusations, so it appears to be a snapshot of the kind of signals we should have been spotting as the dad-to-be kept Carrie’s pregnancy under wraps.”

What kind of dad can we expect Boris Johnson, undoubtedly known for his boisterous character, to be - according to the expert?

“This will probably also be the version of Boris that we will see once the baby is born,” Judi said.

“In terms of body language signalling it tends to look very much like a pseudo-infantile diversionary ritual.

“This occurs when an animal acts like a baby animal in a bid to avoid or deflect attack (or criticism in the case of humans).

“In Boris it will be counter-intuitive as he has plenty of experience in the roles of husband and father but the bashful, dishevelled and bemused look will probably help him to present more as a shy, first-time and rather embarrassed dad.”

Can the public expect to see much of the Prime Minister’s and Carrie Symonds’ baby? Carrie reportedly began an affair with Johnson while he was foreign secretary in 2018 while he was married to Marina - his second wife

“Like President Donald Trump, Boris tends to prefer keeping the stage and the spotlight to himself so I doubt we will see very few poses involving Boris with a baby-carrier slung around his front,” Judi said.

“When he is with Carrie he tends to avoid all but the necessary PDAs and it is usually only her efforts that make them look like a couple.”

Car insurance warning: Thousands of motorists could be caught out with £300 fine this week

ByExperts at GEM Motoring Assist have called on drivers to take a moment before setting off to check whether their car is properly insured...
Read more
Lifestyle

Brexit may see new car prices soar by up to £2,800 which may ‘put the brakes’ on industry

ByA no-deal Brexit would add 10 percent tariffs on cars traded between the UK and EU which could see costs rise by thousands. The...
Read more
Lifestyle

Holly Willoughby net worth: This Morning star has huge sum of money in the bank

ByAt 19 years old, Holly had her first TV job with a role on the CITV show S Club TV before moving to S...
Read more
Lifestyle

ByTesco The supermarket giant has put restrictions on essential items in some stores. Tesco CEO Dave Lewis said panic buying is “unnecessary” and that it “creates...
Read more
Lifestyle

ByOpening up about her decision to a large amount of weight, Lisa said: “I started thinking about my own health. “People forget how gigantic I...
Read more
Lifestyle

Best supplements for hair: Taking either of these two pills could increase hair growth