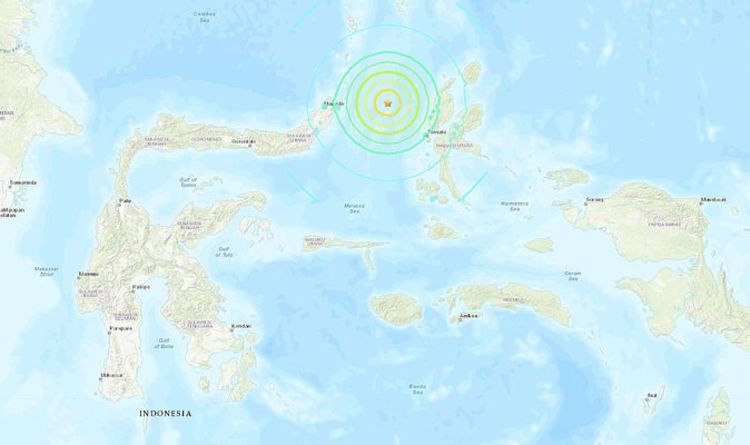 Indonesia has been hit by a huge 7.4 magnitude earthquake hitting the Molucca Sea. The powerful quake has also triggered a tsunami alert in the region. Indonesia’s seismological agency issued the tsunami warning for nearby coastlines.

It struck 134 kilometres northwest of the Malaku islands in Indonesia, hitting the Molucca Sea.

The earthquake hit 145km from Bitung City, which has an estimated population of around 190,000.

Also near the vicinity of the earthquake is Manado, 175km from the epicentre, which has a population of over 400,000.

While, 140km east of the epicentre of the earthquake, is Ternate, which has a population of over 200,000.

And, over an hour after that, an earthquake of 4.9 magnitude hit the same region.

One resident 136km from the epicentre of the earthquake, in Aertembaga, said they felt the impacts of the quake.

There were no immediate reports of damage or injury in the region.

Another resident in Lihunu, 140km from the epicentre of the earthquake, described the quake as “rather strong shaking and rattling”.

Another witness from Sario, around 175km from the epicentre of the earthquake said they felt it hit.

One witness, around 180km from the epicentre from the earthquake, said the windows “started to shake” as well as the furniture.

They wrote: “It was a strong shaking that I could hear before I felt it.

“I thought the wind was picking up outside. Then the windows started to shake and the furniture.

“It was unmistakable and we jumped out of bed to get the kids and run out when it started to calm down but even then it rolled for a minute or two before it stopped.”

Earlier this year, Indonesia was hit by a 7.2 magnitude earthquake, which struck the island of Halmahera, North Maluku.

The earthquake caused millions of pounds worth of damage, killing more than a dozen people and injuring over 100, while more than 50,000 people were displaced.

Indonesia is situated on the so-called Ring of Fire in the basin of the Pacific Ocean, where many volcano eruptions and earthquakes strike.