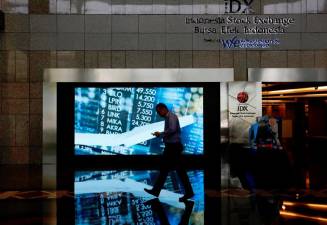 JAKARTA: Indonesia’s stock exchange tightened its trading halt mechanisms today to trigger a cessation of the main stock index more quickly as it moves to protect against coronavirus and oil shock volatility.

Under the new rules, a 30-minute halt would kick in if the index dropped more than 5%, compared with the 10% fall that was previously allowed before trade was stopped for the same period of time.

The changes were made “to maintain securities trading that is orderly, reasonable and efficient,” Indonesia Stock Exchange (IDX) said in a statement.

The main stock index posted its biggest single day loss of 6.6% in more than eight years on Monday, plummeting along with markets around the world. That brought the index’s decline for the year to 18.5%, though stocks have since regained some of the losses.

The new circuit breakers for the main index came a day after the IDX made similar changes to trigger mechanisms for individual stock prices. Trade in a stock will now be halted at at 10%, down from a previous range of 20-35%.

The volatility caused by the virus outbreak has caused foreigners to flee Indonesia’s high-yielding bond and stock markets and forced authorities to defend the rupiah.

Isnaputra Iskandar, an equity analyst with Maybank KimEng in Jakarta, said the effectiveness of the changes would be tested by the market.

“If the market is very volatile, some people may only panic because they can’t exit the market,” he said, noting that trading of some stocks was halted almost daily during the 2008 financial crisis.

Andry Taneli, a portfolio manager with Ciptadana Asset Management, said the immediate focus for the market was the global coronavirus epidemic and Indonesia’s response to the outbreak in its own country.

“The market policies would help, but the main concern is really about coronavirus and how the government will handle the cases and prevent further spread,” he said.

Indonesia has reported 27 cases of coronavirus, including one death, as of Wednesday, a relatively small figure for its population, which has sparked some concern among medical professionals about the risk of undetected cases.

In other changes, the Financial Services Authority loosened buy-back rules from Tuesday, allowing companies to buy back shares worth up to 20% of capital shareholder approval.

Twelve state-owned companies are planning buy backs worth up to 8 trillion rupiah in total, a senior government official said. – Reuters