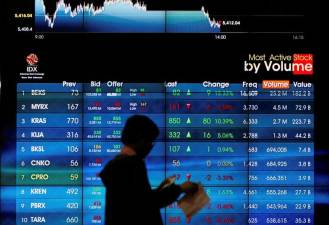 JAKARTA: Indonesia’s central bank and the country’s financial regulator will limit currency market and stock trading hours next week as part of efforts to contain the spread of coronavirus.

“BI will continue coordinating with the government and other related authorities in taking collective steps to monitor, assess, and to conduct prevention and mitigation against the spread of COVID-19,” BI spokesman Onny Widjanarko said in the statement.

The change will come into effect on Monday, March 30 and run until May 29, the current end of the government’s emergency response period.

Indonesia’s financial services authority (OJK) said in a separate statement late on Tuesday it will change trading hours at the Indonesian Stock Exchange (IDX) starting on Monday until further notice to include a longer midday break and end trade an hour earlier.

IDX tightened its trading halt mechanism earlier this month to protect the market against volatility, triggering a 30-minute halt if the main index dropped more than 5%, from 10% previously.