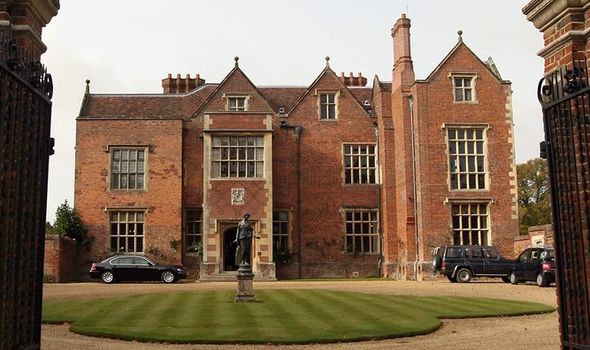 The Prime Minister was discharged from St Thomas’ Hospital in London on Sunday. Now, Mr Johnson has finally been reunited with his pregnant fiancee Carrie Symonds and the couple will spend time at his country retreat.

The Prime Minister was quick to thank NHS staff, admitting “things could have gone either way” during his stay.

Mr Johnson tweeted: “It is hard to find the words to express my debt to the NHS for saving my life.

“The efforts of millions of people across this country to stay home are worth it. Together we will overcome this challenge, as we have overcome so many challenges in the past.”

Mr Johnson is now staying in the famous country house in the Chilterns, which was gifted a century ago to whoever holds the office of prime minister as a retreat from the bustle of Downing Street.

The house also comes with an 1,000 acre estate for the Prime Minister to enjoy some fresh air.

As set out in the Chequers Estate Act 1917, it was hoped the mansion will draw the sitting Prime Minister to “spend two days a week in the high and pure air of the Chiltern hills and woods”.

The estate has a long history, bequeathed to the nation in 1917 by Sir Arthur Lee, Lloyd George became its first prime ministerial occupant in 1921.

JUST IN: Psychologist reveals true impact ‘brush with death’ had on PM

More recently, the estate was used by Theresa May as the location for a crunch 2018 Cabinet meeting to agree her new Brexit proposals.

During a visit in 2015, then Prime Minister David Cameron told French president Francois Hollande that Chequers was “a good place for thinking – away from London”.

Visitors over the years have ranged from the Queen, to foreign leaders such as Russian leader Vladimir Putin and US President Donald Trump, and celebrities including Sir Elton John, Bryan Adams and David Bowie.

It is run and managed by an independent trust and is maintained by an endowment administered by the trustees.

The Trust also receives an annual grant-in-aid from public funds towards maintenance and staffing costs – £882,000 in 2018/19.

Meanwhile, a top psychiatrist has given some insight into how the Prime Minister may be feeling after his “brush with death”.

Professor Neil Greenberg, a member of the Royal College of Psychiatrists and the Health Protection Research Unit at King’s College London, said some people who survive a brush with death can come back even stronger – while others may find the trauma more difficult to recover from.

ByVitamin D is essential for healthy bones, teeth and muscles and is particularly important during the winter season. With daylight shorter, and less time...
Read more