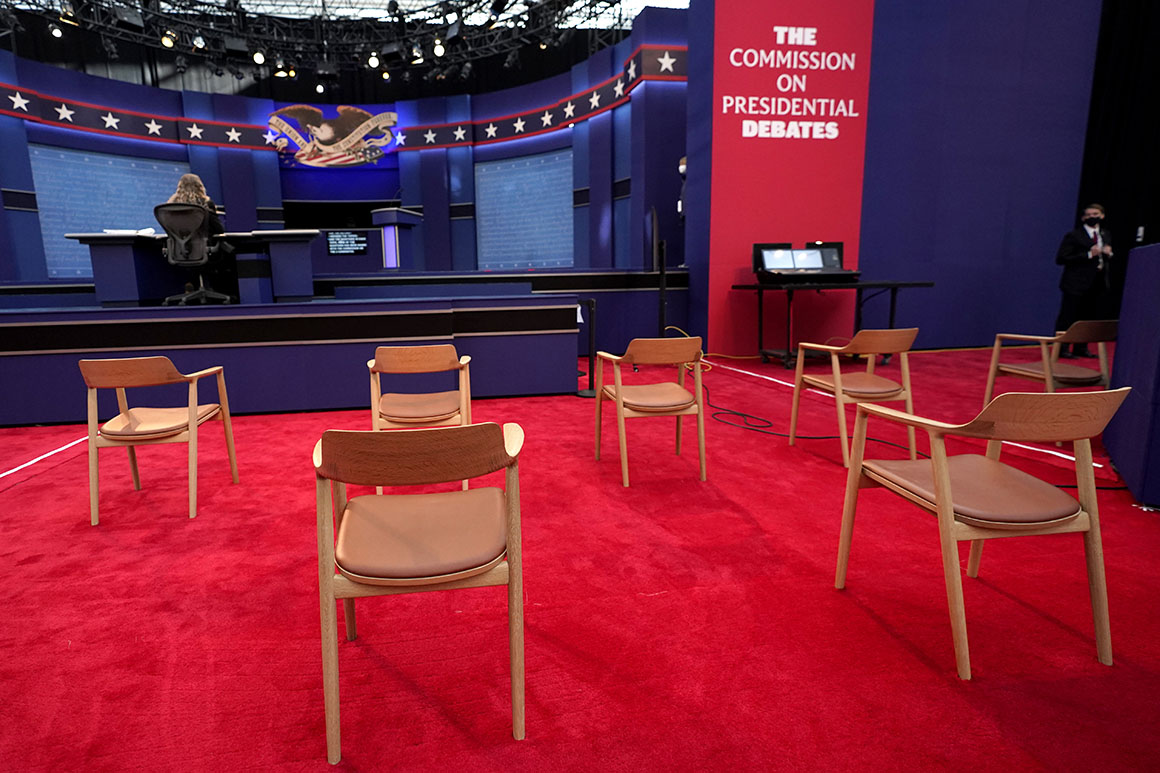 It’s a constant reminder that just outside the safe confines of this debate stage, a pandemic still gripping the nation.

The location — constructed in the atrium of a school for dental, nursing and medical students in just the last two weeks — was specifically designed to downplay the unusual situation. Instead of a grand auditorium with hundreds of empty chairs, the set-up is arranged to fit the scaled-down event. And as a result, the first debate between Donald Trump and Joe Biden has suddenly been transformed into more of a conversation between the candidates than a platform for them to perform to their supporters in the room — a staple of presidential debates for more than four decades.

“The absence of an audience forces the candidates to a different kind of communication,” said presidential historian Jon Meacham. “There are no applause lines, no laugh lines. The absence of a reactive audience is a format that privileges substance over vamping.”

Even without the live audience, the 90-minute debate could attract an audience of 100 million viewers, both on television and online.

Outside the modern, glassy Samson Pavilion, owned by Case Western Reserve University and the Cleveland Clinic, huge dark blue banners marked the occasion: “Welcome to the presidential debate.” But inside, the smaller debate has been overhauled for the age of coronavirus. No handshakes. Covid tests for everyone. And the spin room, where campaign surrogates and aides tried to persuade reporters their candidate won, has been canceled.

The Commission on Presidential Debates, the nonprofit organization that has conducted the general election debates for decades, moved the event to Cleveland in July after the University of Notre Dame backed out of plans to host during the pandemic.

Presidential debates began in 1960 during the race between John Kennedy and Richard Nixon. The four debates were broadcast from television studios with no audiences. One even took place while the candidates were on opposite sides of the country, with identical sets making it appear as if they were in the same room. Audiences became a regular feature when presidential debates resumed in 1976.

“There’s a sense that the audience are real people for the candidates to be playing to — like they’re the jury,” said John Donvan, a former ABC White House correspondent and now the longtime moderator of the nonpartisan debate series Intelligence Squared U.S. “Their presence is important. Not having that really does change the dynamic.”

Presidential debates generally have audiences of about 1,000. On Tuesday, rows of socially distant wooden chairs will seat a few dozen people, no more than 80. Attendees will include the candidates’ wives, members of the campaigns, hosts, health and security officials and journalists, according to the commission.

Donvan, who moderates debates online these days, expects Trump and Biden will speak more to each other and moderator Chris Wallace in this debate. That’s not how it was done in 2016.

In 2016, debate moderators asked audiences at the three presidential debates to remain quiet but they still broke out in laughter, applause and even cheers as Trump and Democrat Hillary Clinton lobbed one accusation after another at each other. The candidates made faces for the audience, waited for them to finish reacting before they proceeded and judged their zingers by the response.

Ever the showman, Trump, the reality TV star who had never run for office, performed for the crowd, capturing the spotlight time and time again with a joke, one-liner or a false claim.

In the second debate, Trump even walked around the stage, moving closely behind Clinton as she talked — a move that would violate social distancing guidelines.

When Trump first called Clinton using the honorific title “Secretary Clinton,” he paused to ask if that was acceptable. “I want you to be very happy. It’s very important to me.” Laughter ensued.

When he accused her of deleting 30,000 emails, someone from the audience cried out “Yeah!”

When Trump blamed her for the country’s problems — and Clinton predicted he would blame her for everything — he quickly responded. “Why not?” Some attendees cheered.

“In recent memory, audiences have become a big part of the debate” said Aaron Kall, director of debate at the University of Michigan and co-author of the book “Debating The Donald.” “They used to be there for pageantry. It looks good on television. But in the world of Trump, both as candidate and president, they’ve become larger parts of the debate.”

Biden has some experience with an audience-free debate. He and final Democratic primary challenger Bernie Sanders moved their last debate from Arizona to CNN’s Washington, D.C., studios in March as the pandemic was setting in. Sanders was aggressive, but Biden was focused, giving a well-received performance.

Tuesday’s debate still had many of the trappings of a traditional presidential debate — closed roads, swarms of police officers and gift bags for attendees.

But inside the gift bag? A list of social distancing guidelines and small bottles of Purell.