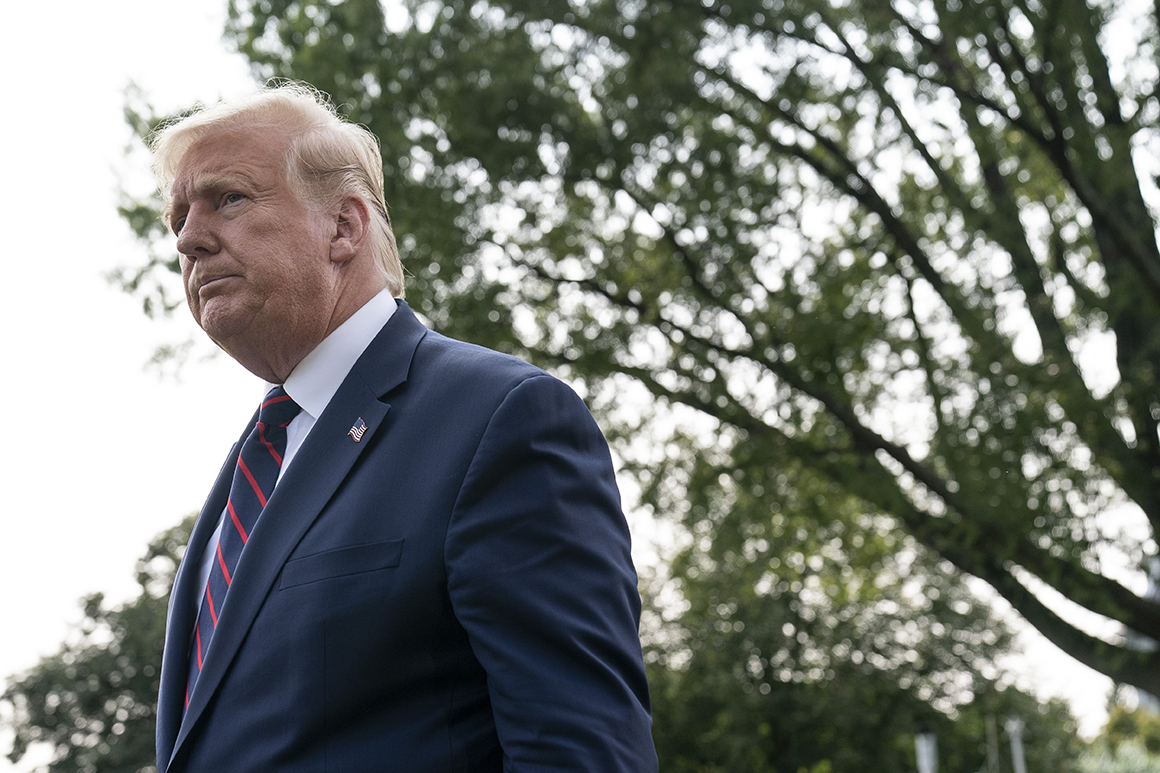 “There are still quite a few combinations here,” said Greg McNeilly, a Republican strategist in Michigan and longtime adviser to Secretary of Education Betsy DeVos. “This guy has an unshakable base, but he has a pretty low ceiling. So that combination has just created this substrata that he has across all states that allows him to be within reach of winning, but suppressed, below it. It’s a really weird dynamic.”

The top spokesperson for HHS, Michael Caputo, says he’s taking a leave of absence for health reasons — less than a week after POLITICO first reported that he was interfering with CDC reports on coronavirus.

Four years ago, Trump’s prospective map appeared much narrower at this point in the campaign. Exactly half of his general election campaign events were held in just four states: Florida, North Carolina, Ohio, and Pennsylvania.

“We looked at basically six states in 2016 that were in play, and we didn’t know about three of them,” said Whit Ayres, the longtime Republican pollster. “You have double that this year. You have at least a dozen states that could legitimately go either way.”

Much of the map’s fluidity is a function of Trump’s weak standing nationally — forcing Republicans to adopt a defensive posture in states that Trump won easily in 2016. He dispatched Vice President Mike Pence to Ohio on Wednesday, while Preserve America, the pro-Trump PAC, has been airing ads in Iowa this month. Republicans have spent nearly $ 6 million on TV ads since June in Georgia, a state no Republican has lost since 1992.

But because of Trump’s relatively unshakable level of support with his base, he remains in the hunt in several blue states that were not widely thought to be within his grasp this year, including New Hampshire, Minnesota and Nevada. Uncertainty about the pandemic’s effect on voting and ongoing legal challenges surrounding mail voting have muddied turnout models across the country. What’s more, Republicans — and many Democrats — believe that if Trump can stay within striking distance of Biden by making small investments in many states, rather than big investments in a small number of states, he could benefit in any number of places from a shift in the national arc of the race.

Take Nevada. In 2016, Trump lost by just over 2 percentage points there and he was not widely expected to compete seriously this year. But “there’s a lot of X factors at play in Nevada at the moment,” said Andres Ramirez, a Nevada-based Democratic strategist and former vice chairman of the Democratic National Committee’s Hispanic Caucus.

“Coronavirus has upended everything,” Ramirez said. “I’m not sure what turnout is going to be and how it’s going to break.”

Republicans view their imperative as holding as many of those states open for as long as possible, creating as many paths to 270 Electoral College votes as they can in the event Trump loses any states he won in 2016. Rory McShane, a Nevada-based Republican strategist, said Trump still “puts a lot of states on the map that previous presidents haven’t,” including New Mexico, which Trump lost by 8 percentage points four years ago.

“Quite frankly, they have the resources to compete everywhere.” McShane said. “When you’ve got Democrats having to defend Minnesota, you have the opportunity to expand the map.”

Trump also may be running out of time. In North Carolina, elections officials began sending ballots to voters earlier this month, and early voting will start in Minnesota on Sept. 18. Democrats have built a massive lead in absentee ballot requests across the battlegrounds. And Trump’s outlook hinges on an assumption that he will hold Florida, a state he won four years ago, but where he and Biden are now close to tied. Complicating Trump’s efforts in Florida, billionaire Mike Bloomberg said Sunday he will spend as much as $ 100 million in that state to defeat Trump.

According to the ad-tracking firm Advertising Analytics, Trump canceled ad reservations this week in Nevada, New Hampshire and Iowa.

“If you look at the pathways to victory of where we stand right now… as long as we hold on to Florida and do well in the states that we believe that we are — states like Arizona and North Carolina — Joe Biden has to shut us out and go four for four in Minnesota, Wisconsin, Michigan and Pennsylvania,” Jason Miller, a senior adviser to Trump, said on a call with reporters recently. “Think about that for a moment. As long as we hold onto Florida, they have to go four for four in those states, something that we just don’t think is going to happen.”

Bill Stepien, Trump’s campaign manager, said it was “very notable” that Trump went to New Hampshire after the convention. And the campaign is spending millions of dollars in Minnesota, forcing Biden to begin running advertisements there, while Biden will visit the state on Friday.

Yet it’s also a tacit acknowledgment that Trump appears unlikely to repeat the path he took to the presidency four years ago — and that his battleground map remains unsettled. Trump is running behind Biden by more than 4 percentage points in Michigan, Wisconsin, Pennsylvania and Arizona, according to RealClearPolitics polling averages, all states he won in 2016.

In Ohio, where Trump beat Clinton by 8 percentage points in 2016, polls have narrowed. Before Pence arrived for a “Workers for Trump” event at a fairgrounds in Zanesville, David Pepper, chairman of the Ohio Democratic Party, said, “We think we’re in the dogfight through the end, unless Biden just doesn’t compete here.”

For Trump, losing Ohio’s 18 electoral votes would be devastating. No Republican has ever won the presidency without carrying the state. On Tuesday, Biden’s campaign manager, Jen O’Malley Dillon, said the former vice president will have “multiple pathways” to 270 electoral votes, including a potential expansion in Arizona, where Biden has led in recent polls.

“I would say based on the stability of the race [and] the strong support the vice president has, that we maintain the same pathways and have seen an expanded footprint on states that are in play than we have seen in recent memory,” she said in a POLITICO Playbook interview.

In more far-flung, Democratic-leaning places, Trump’s optimism in part reflects his public confidence that he is winning — or should be winning — even when he’s not. In a nod to one of those states — heavily Democratic California, a state no Republican could win this year — Trump drew cheers when he chuckled at a rally in North Carolina recently, “I don’t know, maybe we’ll make a play for that one, too.”

Republican strategists who hear Trump talk like that — or who see him in Nevada instead of Wisconsin or Pennsylvania – sometimes grumble about his lack of focus. One prominent Republican strategist said that with less than two months before the election, “False hope is creating wasted time.”

“He’s got to have the perfect thing,” the strategist said. “It’s a super fine needle to thread.”

Democrats share that skeptical outlook of Trump’s prospects. On one level, said Pete Giangreco, a Democratic strategist who has worked on nine presidential campaigns, “The easy way to win reelection, which is just to win the states he won last time, is really hard. So, they have to find some Democratic states they lost” in 2016 to flip four years later.

However, he said, “You’re approaching this from the point of view of what a rational and disciplined campaign would do, which I think is a really f—– up thing to do. They’re undisciplined … The [Trump] campaign is a snapshot of how they’ve governed for 3½ years, which is to ignore the problems and hope they go away, just do whatever you want on any given day and don’t play by any of the rules.”