Interstellar comet is carrying ALIEN water from another solar system 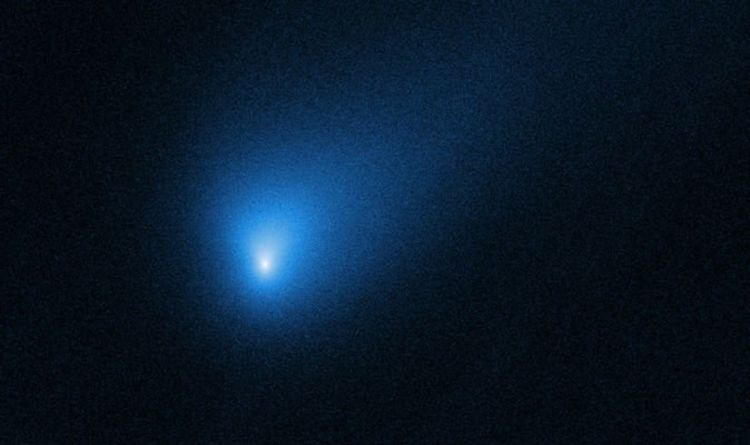 Comet 2I/Borisov was first discovered back in August and was confirmed to be an interstellar visitor which did not originate in our solar system two months later. Now, scientists have detected trace amounts of water on the comet, which is about 0.5 kilometres in length, which could prove that there are other Earth-like planets out there which also contain water. Astronomer Adam McKay of NASA’s Goddard Space Flight Center in Maryland and colleagues used the Astrophysical Research Consortium Telescope in New Mexico to examine the comet, which is whizzing through the solar system at a staggering 110,000 miles per hour.

When light from the Sun hits the comet, the space object either absorbs or reflects the light.

By analysing the light spectrum from the comet, the researchers were able to deduce that the reflection was consistent with something containing water particles.

The team wrote in the research paper published in the journal arXiv: “Comets have a primitive volatile composition that is thought to reflect the conditions present in their formation region in the protosolar disc.

“This makes studies of cometary volatiles powerful for understanding the physical and chemical processes occurring during planet formation.

“Comet 2I/Borisov provides an opportunity to sample the volatile composition of a comet that is unambiguously from outside our own Solar System, providing constraints on the physics and chemistry of other protostellar discs.”

Comet 2I/Borisov is only the second such interstellar object known to have passed through the Solar System.

Gennady Borisov, an amateur astronomer from Crimea discovered the comet in August.

Dr Amaya Moro-Martin of the Space Telescope Science Institute in Baltimore, however, described it as “very remarkable” how the comet’s properties appear to be so similar to those of our own solar system’s building blocks.

The bizarre cigar-shaped space rock is believed to have been wandering among the stars for hundreds of millions of years and it is the first foreign object to be spotted in our solar system.

‘Oumuamua is about 400 metres long and is a dark red colour and was spotted by the Pan-STARRS1 telescope in Hawaii on October 19, 2017, travelling at about 95,000 kilometres per hour.