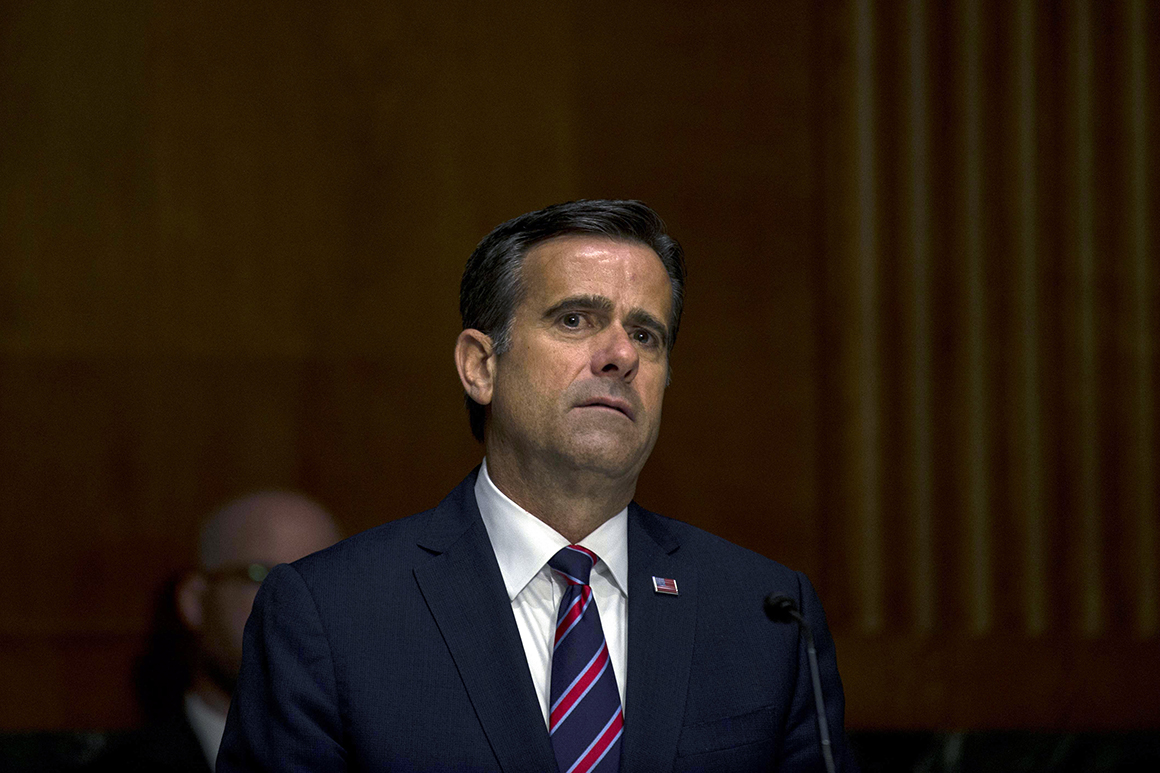 The threatening emails, purportedly sent by a far-right extremist group called the Proud Boys, told recipients, “You will vote for Trump on Election Day or we will come after you. Change your party affiliation to Republican to let us know you received our message and will comply.”

The messages also claimed that the senders had breached America’s “entire voting infrastructure” and would be able to tell how the recipients voted.

The Proud Boys denied sending the emails — which appeared in the inboxes of registered Democrats — and local officials who were sent copies of the messages forwarded them to the FBI.

Ratcliffe’s description of the emails as intended to damage Trump raised eyebrows, given that the messages demanded that recipients vote for the president or face harm.

Some Democrats immediately questioned whether Ratcliffe, a Trump loyalist who has been accused of using his powerful post to boost the president’s political fortunes, was distorting the Iranian situation.

“The e-mails told voters to support Trump but the DNI is sure the intent was to hurt Trump?” Sen. Chris Murphy (D-Conn.) tweeted. “That’s a dubious claim that seems motivated by the Administration’s desperation to distract from Russian interference and create false equivalencies between Russian and Iranian efforts.”

Senate Minority Leader Chuck Schumer (D-N.Y.) said on MSNBC that intelligence officials did not claim during a classified briefing that Iran had been trying to undermine Trump.”From the briefing, I had the strong impression it was much rather to undermine confidence in elections and not aimed at any particular figure,” Schumer told host Rachel Maddow.

“Unlike the U.S., Iran does not interfere in other country’s elections,” tweeted Alireza Miryousefi, spokesman for Iran’s mission to the United Nations. He added, “The world has been witnessing U.S.’ own desperate public attempts to question the outcome of its own elections at the highest level.”

Only minutes after the briefing, Trump mocked suspicions of Russian interference in the election during a rally in Gastonia, N.C. He dismissed Democrats’ concerns that Russian disinformation campaigns were working to peddle malicious story lines about the Biden family.

There is no indication that either Russia or Iran hacked into voter registration databases to obtain the information that they acquired. Voter data is publicly available in many states.

One of the emails that officials linked to Tehran included a link to a video purportedly showing how it was possible to submit a fraudulent ballot.

“This video, and any claims about such allegedly fraudulent ballots, are not true,” Ratcliffe said.

He called the messages “desperate attempts by desperate adversaries.”

DHS’s Cybersecurity and Infrastructure Security Agency informed election officials on Wednesday that the intimidating messages were the work of a “hostile foreign actor,” according to a person on the briefing call. At the time, officials did not identify the country in question.

As the federal officials described it, “The goal [of the emails] was to be like, ‘Look, we can do it, and you shouldn’t vote because you shouldn’t trust this,’” said the person who participated in the half-hour call, who requested anonymity to discuss a private briefing.

U.S. officials have spent months warning voters not to believe exaggerated claims about the election process and to seek out information from trusted sources such as state election administrators.

Shortly before Ratcliffe spoke, the leaders of the Senate Intelligence Committee offered their own cryptic warning.

“As we enter the last weeks before the election, we urge every American — including members of the media — to be cautious about believing or spreading unverified, sensational claims related to votes and voting,” Senate Intelligence Chairman Marco Rubio (R-Fla.) and Vice Chairman Mark Warner (D-Va.) said.

Sen. Angus King (I-Maine), a member of the Senate Intelligence Committee, said it’s logical that Russia and Iran would step up their election interference activities in the final days of the campaign. The important thing now, he said, is for the intelligence community to continue publicly describing these foreign efforts to help voters — and local election officials — combat it.

“The crucial point is that the intel community, and I think it ought to be practically on a daily basis, has to alert the American people as to what’s going on and who’s doing it,” King said.

King, who declined to discuss specifics of the classified intelligence underlying Wednesday’s announcement, said voters can use the information from Ratcliffe and FBI Director Christopher Wray to redouble their skepticism toward any communications from suspicious sources and to disregard claims on social media about voting that they haven’t verified with official sources. And election officials now have a fresh remind to gird themselves for more attacks.

“This announcement tonight puts them on notice that there are malevolent actors poking around and that they should be on their guard,” King said.

“We are not going to tolerate foreign interference in our elections or any criminal activity that threatens the sanctity of your vote or undermine public confidence in the outcome of the election,” Wray said.

Kyle Cheney and Matthew Choi contributed to this article.