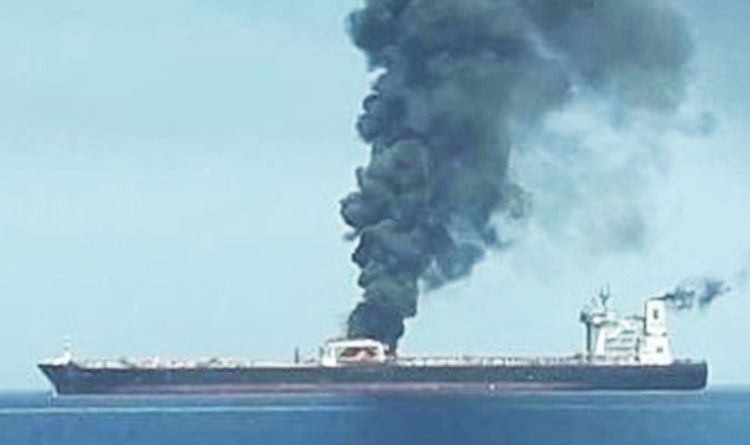 The tanker burst into flames and suffered heavy damage and was leaking crude oil into the Red Sea about 60 miles from Jeddah. The missile attack is the latest incident involving oil tankers in the Red Sea and Gulf region and is likely to ratchet up tensions between Iran and Saudi Arabia.

The National Iranian Oil Company (NIOC), which owns the stricken vessel, identified the ship as the Sabiti after initial reports had identified it as the Sinopa.

A spokesman for NIOC said: ”Two missiles hit the Iran-owned ship near the Jeddah port city of Saudi Arabia.”

Iran’s ISNA news agency cited sources saying the vessel was hit in a “terrorist” attack and then country’s semi-official Fars news agency said: “Technical experts believe the incident may be due to terrorist activity.”

The Nour news agency said all crew members were safe and the situation of the tanker is stable.

It said: “None of the crew members were injured at the explosion. The situation is under control.”

The US Navy’s Fifth Fleet, which is based in Bahrain and patrols key shipping lanes throughout the Middle East, said it was aware of reports about the tanker but had no details.

A spokesman said: “We are aware of the reports but we don’t have any further information.”

Tensions are already high in the Red Sea shipping area, which links the Indian Ocean with the Mediterranean via the Suez Canal.

The explosion comes after the US accused Iran of attacking oil tankers near the Strait of Hormuz and could further inflame tensions between Washington and Tehran.

It follows attacks on vessels near the Strait of Hormuz, the shooting down of a US military surveillance drone and other incidents across the wider Middle East.

A recent drone and cruise missile attack on key Saudi Arabian oil facilities has also been blamed on Iran although Tehran denies the allegations.

The Iran-backed Houthi movement claimed responsibility for the attack which damaged the world’s biggest crude oil processing plant and temporarily halved Saudi production but their involvement was dismissed as implausible by security analysts.

Iran denied blame and said it was ready for “full-fledged war” while US President Donald Trump said Washington was “locked and loaded” to retaliate.

There have been a number of incidents involving Iran and oil tankers in recent months.

In July, British-flagged tanker Stena Impero was seized in the Strait of Hormuz two weeks after British marines captured an Iranian tanker off Gibraltar for a suspected breach of EU sanctions.

Both vessels were eventually released.