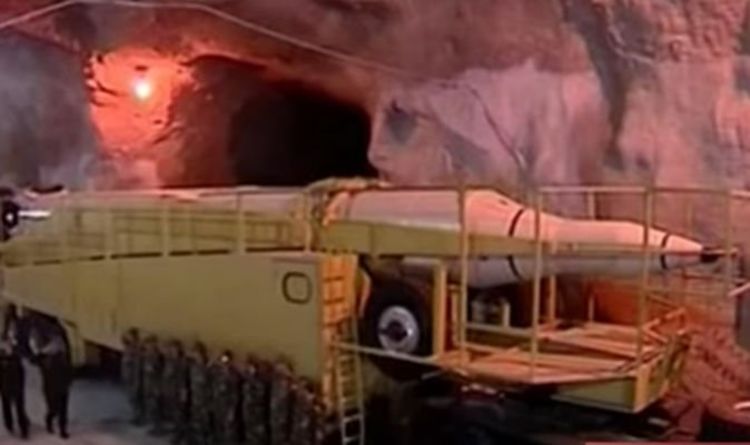 The Islamic Republic’s so-called “Missile Cities” conceal huge stockpiles of weapons and are ready to be used if “enemies make a mistake”. Startling footage from within the cavernous military bases reveals the extent of the Revolutionary Guard’s (IRGC) extraordinary underground arms cache.

Brigadier General Amir Ali Hajizadeh, commander of the Islamic Republic’s Revolutionary Guards’ aerospace division, said: “We must protect our arsenal adequately. The idea goes back to 1984, just when we started making missiles.

“Before the first material of this type was imported into the country, we had already begun digging tunnels to hide them.

“Nowadays, they are called missile towns, deep in the mountains, very sophisticated tunnels are dug in the ground to store ammunition, and hide missile launching bases and other instruments, as well as the personnel in charge.

“Our enemies are worried because these places are out of their reach.

“If enemies make a mistake, the missile bases will erupt like a volcano from the depth of earth.”

There are thought to more than 10 secret bases hiding missiles with a range of up to 1,200 miles.

Footage broadcast on Iranian TV showed one of the biggest – a heavily fortified underground military base constructed with reinforced concrete and packed with rockets.

Iran’s Shahab-3 missile, known as the “Shooting Star” can launch explosive chemical warheads at targets some 620 miles away.

Iranian officials are believed to have bought the missiles from North Korea, which developed the weapon with the sole purpose of striking US targets from the Korean Peninsula.

And in another chilling development, Iran’s Supreme Leader Ayatollah Ali Khamenei has told the IRGC to develop more advanced and modern weapons.

In a speech at Imam Hussein Military University in Tehran he said: “The Guards should have advanced and modern weapons. Your weapons should be modern and updated. It should be developed at home. You need to develop and produce your weapons,.

“Today the Guards have a powerful presence inside and outside Iran. America’s hostile approach has increased the Guards’ greatness.”