Irish election exit polls: What time do polls close? When can we expect a result? 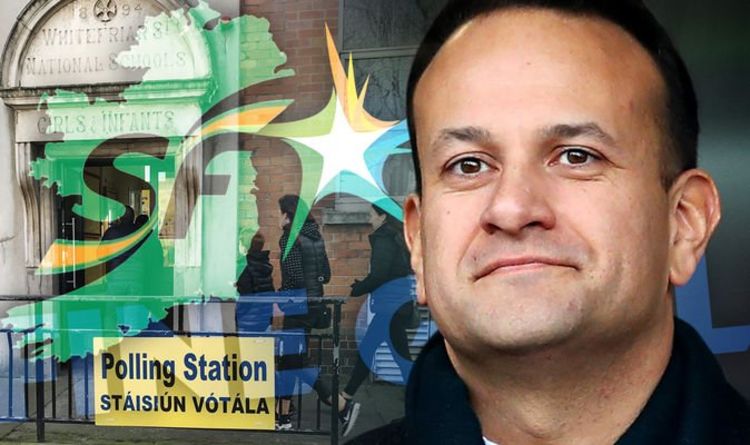 Irish voters will take to the polls today to elect the 33rd Dail. The most recent opinion polls had Fine Gael in third place, behind Fianna Fail and Sinn Fein – a damning blow for Taoiseach Leo Varadkar. The first votes were cast yesterday as people living on islands off the coast of Galway, Mayo and Donegal went to the ballot boxes, while the mainland votes today.

Casting his vote in Ennis, Co Clare, he said he was sure his party would be returned on top.

His confidence comes despite recent opinion polls which indicated a surge in support for Fianna Fail and Sinn Fein.

The Taoiseach said: “I think those predictions are going to be wrong, any opinion polls that have been taken were taken before the big debate on Tuesday night which I think I did quite well in and before some of the controversies in relation to Sinn Fein became major news.

“It’s a three-horse race, three parties all within shouting distance of each other, it’s going to be down to the public.

“The public are going to vote on Saturday, they’ll decide which party is the largest party on Sunday and I believe that will be Fine Gael.”

Elsewhere, Sinn Fein president Mary-Lou McDonald was on the campaign trail in Dublin this morning.

She said: “The people were ahead of the curve in real terms in articulating the kind of profound change that they want, people were telling us ‘we want change and by the way you are it, so get ready and serve us well’.

“I’m looking forward to the finishing line and I’m hopeful people come out and vote in great numbers, but it won’t end for us until the polls close, so we’ll be out and about talking to people, and I suspect the song that our activists insist on playing around me ‘Hello Mary Lou’ will get a blast, so I’ve my parents to thank for that.

“It’s very important people realise your vote matters, because people have been left behind by the old politics.

“Every vote is equal tomorrow, the vote of the wealthiest person, the vote of the person who is really struggling by, you have an equal say, please realise that and please come out and vote for change.”

Who are the key players?

Will there be an exit poll?

The Irish Times will publish an exit poll as soon as voting ends on Saturday night to give the first indication of the outcome of general election 2020.

The results of the poll will be announced at 10pm.

Sampling for the poll will take place all day on Saturday across the country among 5,000 respondents.

Facebook
Twitter
Pinterest
WhatsApp
Linkedin
ReddIt
Email
Tumblr
VK
Previous articleOut of sight: Criminals take to central North Carolina’s rural backroads to move drugs
Next articleHow to get rid of visceral fat: Why it's the dangerous fat? Best diet to get rid of it