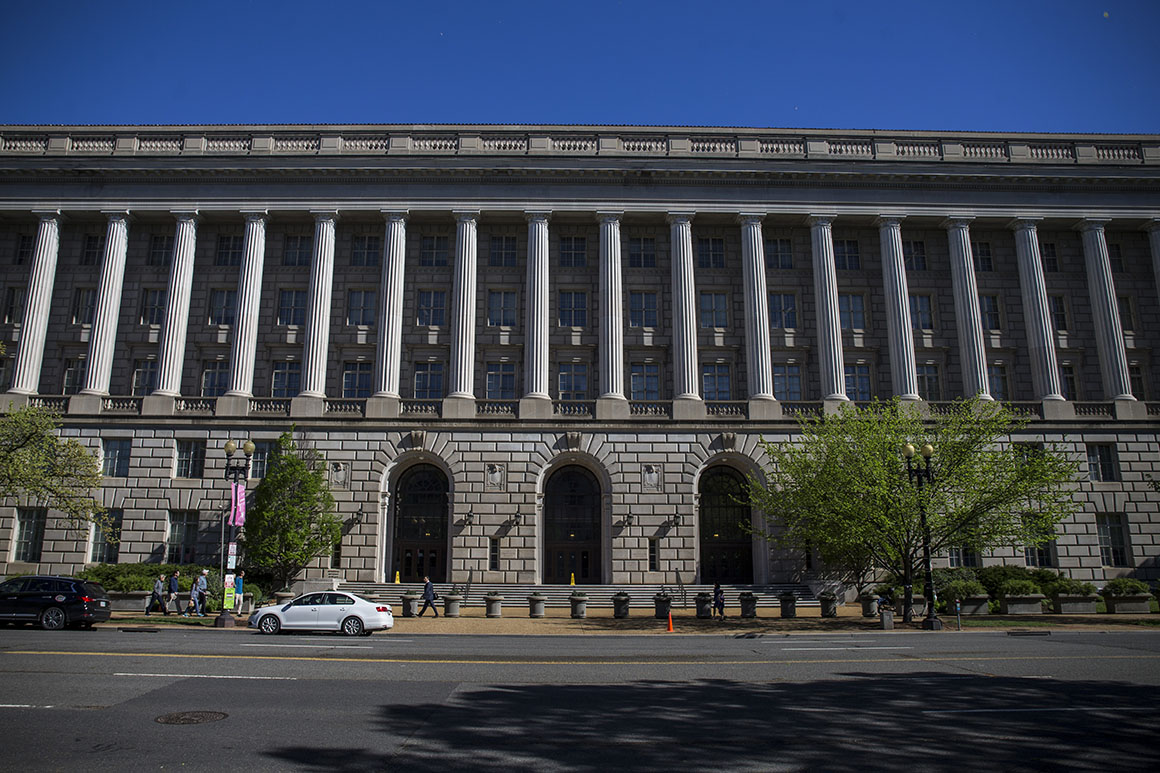 The IRS will start recalling “certain employees in mission-critical functions” to agency offices starting Monday, though it is urging them to bring their own face masks and suggesting the employees can make them out of t-shirts or bandanas, according to an internal memo circulated Saturday by two lawmakers.

Tony Reardon, who heads the National Treasury Employees Union, said separately that the “initial wave” will include about 10,000 employees at 10 locations who will be “opening taxpayer correspondence, handling tax documents, taking taxpayer telephone calls and performing other functions related to the filing season.”

The IRS shuttered all of its processing and taxpayer assistance centers in recent weeks to shield its workforce from exposure to the coronavirus, and thousands of its employees have been teleworking. But it is now scrambling to get economic stimulus payments to millions of Americans and to implement other key elements of the economic rescue package enacted last month.

The agency is asking for volunteers and offering incentive pay, Reardon said in a statement, but will order employees back if there are not enough volunteers.

“We are communicating with the IRS about working conditions at those facilities to make sure there are adequate cleaning and disinfecting supplies, accommodations to allow for physical distancing among employees and personal protective equipment, including masks and gloves,” Reardon said.

But the agency memo, released by House Ways and Means Committee Chairman Richard Neal (D-Mass.) and Rep. John Lewis (D-Ga.), who heads the panel’s oversight subcommittee, said that while the IRS “is seeking to procure personal protective equipment (PPE) such as masks and gloves, each IRS facility may not be able to initially procure the PPE for all employees immediately.”

“Employees are therefore required to bring personal face coverings for their nose and mouth area when they come to work. As stated in the CDC recommendations, these face coverings can be fashioned from common household materials," the memo said, "such as clean t-shirts or bandanas."

Neal and Lewis blasted IRS officials for not providing the safety equipment for all employees returning to agency offices.

“It is understandable that in carrying out its mission during a crisis, the agency would require some employees to report back to work during perilous times,” the lawmakers said in a statement. “However, it is completely irresponsible and unethical for the IRS to demand those workers obtain their own protective equipment — this is the responsibility of the federal government to its workers.”

An IRS spokesperson did not respond to a request for comment.

The IRS has about 73,000 employees nationwide. Its work has been severely constrained by its office evacuations just as it is being called on to make sure stimulus payments go out and that cash strapped companies get quick refunds.

While the agency began automatically depositing those payments in most taxpayers’ bank accounts last week, it is gearing up to send out paper checks to millions of others who haven’t provided their banking information.

The IRS is also in the midst of the tax filing season, which was extended until July 15 because of the coronavirus pandemic.

“Effective April 27, 2020, the IRS will be recalling certain employees in mission-critical functions to handle work that must be conducted onsite,” said the agency memo, sent Friday by IRS Human Capital Officer Robin D. Bailey Jr. and a deputy.

The email warned that, “An employee who fails to adhere to the requirements in the memo may be required to return home until such time the employee adheres to these requirements. Please remember, the intent of this requirement is to ensure the health and safety of all our employees and their families.”

Neal and Lewis said the IRS “is expecting entirely too much of employees who are likely distraught over the health risks returning to work presents for themselves and for their families, as well as the potential repercussions they could face if they do not clock in on Monday with the mandated equipment in-hand.”

The lawmakers said IRS Commissioner Chuck Rettig told congressional staff earlier this week that 100 agency employees have been diagnosed with Covid-19 and four employees have died, though the lawmakers didn’t provide further details.

Reardon said the NTEU believes employees on telework should keep doing that “until all state and local stay-at-home orders are lifted and health and safety precautions have been met.”

Aaron Lorenzo contributed to this report.