Is Britain close to a second wave? Alarming map shows... 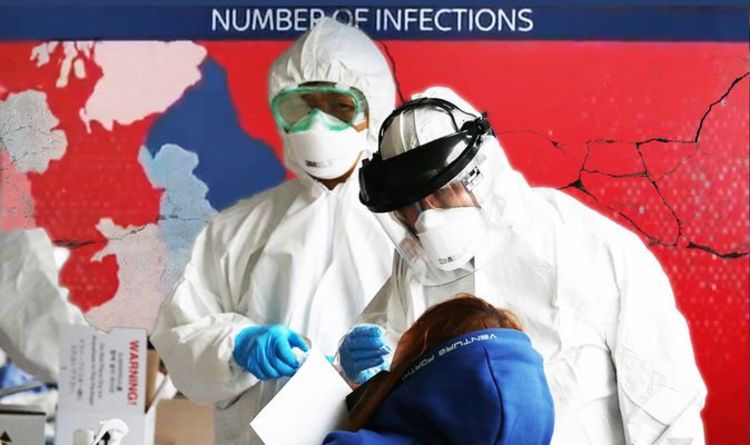 There is growing calls for England is ease restrictions by region, after data from Cambridge University broke down the risk of a second infection wave by geography. A chilling coronavirus chart on Sky News showed the regional R-number – the number of people an infected person passes the disease on to – across England. In surprise news, London has by far the lowest R-number in England, with an average of just 0.4 compared to the average in the rest of country at 0.75.

This comes after the Government signalled a shift in its position on the importance of the R-rate after data showed that the infection rate had risen.

Boris Johnson announced last Sunday that keeping the R-rate below one was a key component of his roadmap out of lockdown.

However, on Friday, at the Downing Street press briefing, Health Secretary Matt Hancock suggested ministers would accept the figure staying flat, rather than reducing.

He said the test was that “it doesn’t go above one so that still meets that test”.

Explaining the latest R-rate numbers, Sky’s Helen Ann Smith said the data showed that London and the Midlands have the lowest COVID-19 infection rates in England.

She added: “With the exception of London and the Midlands, all the other regions have an R-rate over 0.70.

“North-East and Yorkshire are faring the worst with 0.80 average. When you look at the range, they are edging towards 1.

The latest figures raises questions about the extent to which restrictions can be safely eased in the coming weeks.

There is also the question of whether all areas will be safe to emerge from lockdown at the same time.

There is growing unease among leaders in the north at plans to ease lockdown rules soon, with one council leader branding it as “frankly, madness”.

The leader of Gateshead council, Martin Gannon, said on Friday that the advice to the public to “stay at home” would continue.

Mr Gannon’s views on lockdown were echoed by his counterparts in Newcastle and Sunderland.

He told the Guardian that he fears there was evidence that the R-rate was greater than 1 in his borough.