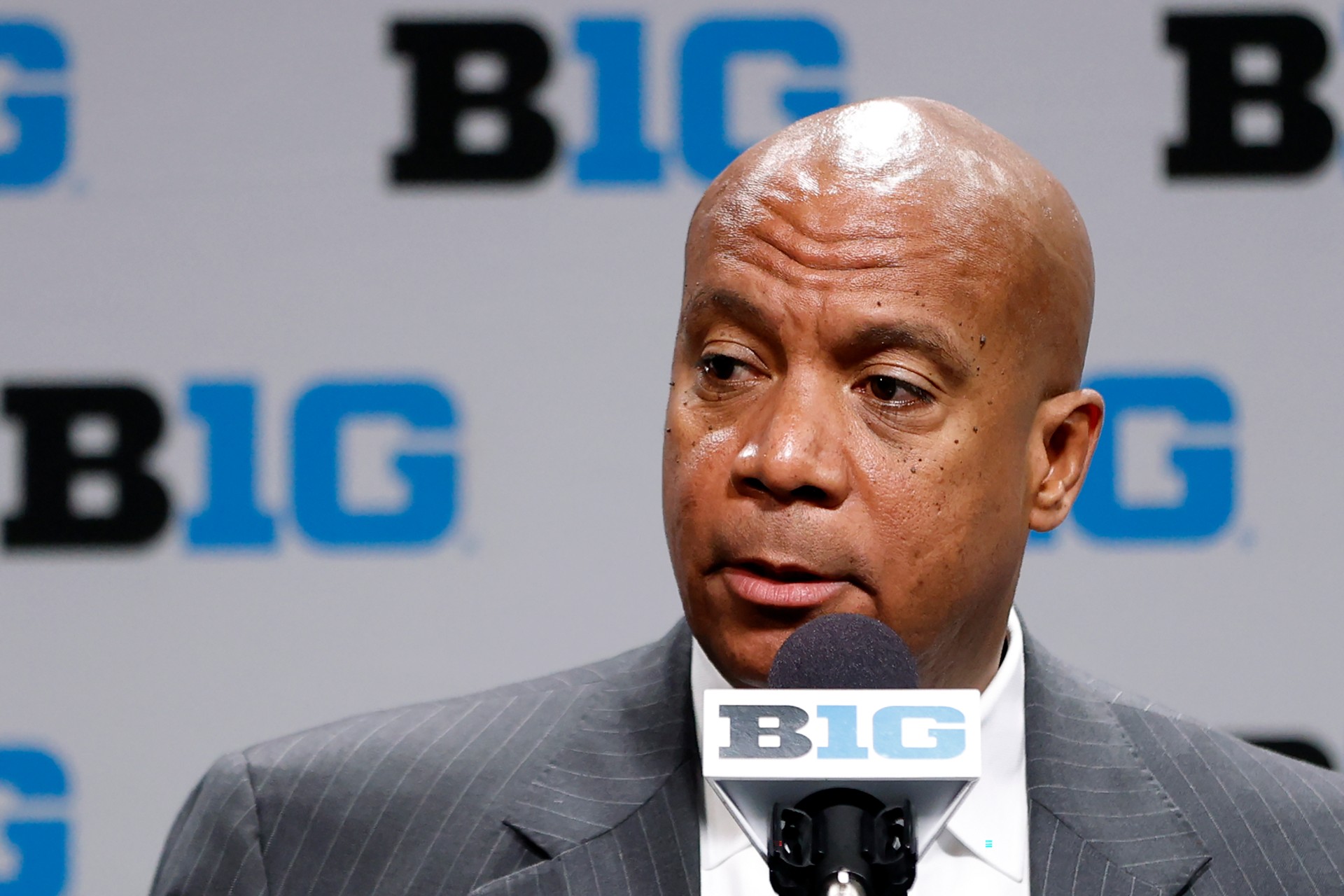 The decision whether FBS college football will be played in 2020 is at a crossroads, as two Power 5 conferences have canceled the fall sports season.

It’s a decision influenced by the COVID-19 pandemic in the United States, but there are other factors at work. College football players are inching toward a player’s union. The Power 5 commissioners have not delivered a unified message. The next week will influence whether FBS college football will happen at all.

Sporting News will update those developments here as they happen.

MORE: How COVID-19 has driven college football to the brink of cancellation

(Aug. 16): Ohio State quarterback Justin Fields shared a petition — which he himself created — to “request that the Big Ten Conference immediately reinstate the 2020 football season.” Per the petition:

“We want to play. We believe that safety protocols have been established and can be maintained to mitigate concerns of exposure to Covid 19. We believe that we should have the right to make decisions about what is best for our health and our future. Don’t let our hard work and sacrifice be in vain. #LetUsPlay!”

(Aug. 13): NCAA chairman Mark Emmert announced that Division I will not have fall championships, with the exception of FBS football. “We cannot now, at this point, have fall NCAA championships, because there’s not enough schools participating,” Emmert said.

Emmert said a legitimate championship cannot happen without at least half the teams partcipaiting. As of now, 76 of the 130 FBS schools are still playing football.

New Mexico State postpones fall football season to spring because of COVID player health & safety concerns as well as 14-day quarantine requirement when traveling back into state, sources told @Stadium. Of 130 FBS programs, 54 will not play in fall, while 76 plan to play in fall

(Aug. 12): Ohio State releases a statement from athletic director Gene Smith saying it will not seek out other opponents outside of the Big Ten in the fall of 2020:

“Ohio State has continued its communications with the Big Ten Conference office regarding a scenario to still play fall football games, but has now determined that this would not be an allowable opportunity for us to move toward,” Smith said in the statement. “We are 100 percent focused on supporting the health and safety and academic success of our student-athletes, and on working with the Big Ten to develop a spring plan for our sports as expeditiously as possible.”

(Aug. 12): College Football Playoff director Bill Hancock told Sporting News he is “hopeful” that the four-team playoff can go on in 2020-21.

“With the CFP we are hopeful, but it is too soon to say,” Hancock told Sporting News in a Wednesday interview. “It’s just too soon to talk about the implications of (the Big Ten and Pac-12 cancellations). Our staff had a call today about Miami and planning. We certainly want to be ready if there is a season.”

Big 12 also still on for now

(Aug. 11): Yahoo Sports’ Pete Thamel the Big 12 will proceed with its 2020 college football season after a conference call Tuesday:

Source: The Big 12 Presidents are wrapping up their call. The league is going to continue to pursue playing this season. A schedule, which was already prepared, will be released in the near future. This confirms what our @rivals friends at @SoonerScoop reported.

The Big 12 will release its schedule soon, and for now remains the third Power 5 conference that intends on playing football this fall. Between the ACC (and Notre Dame), SEC and Big 12, there are 39 Power 5 schools that could play.

(Aug. 11): The SEC and ACC both released statements with their intention to keep playing in 2020:

(Aug. 11): The Pac-12 became the second Power 5 conference to cancel its fall football season, the conference announced on Tuesday. Moreover, the Pac-12 postponed all sports through the end of the calendar year.

“The health, safety and well-being of our student-athletes and all those connected to Pac-12 sports has been our number one priority since the start of this current crisis,” Pac-12 commissioner Larry Scott said in a statement. “Our student-athletes, fans, staff and all those who love college sports would like to have seen the season played this calendar year as originally planned, and we know how disappointing this is.”

That means 53 FBS programs have canceled football this fall, including 26 Power 5 schools.

(Aug. 11): The Big Ten has canceled its fall sports season, including football, commissioner Kevin Warren announced Tuesday. The conference will explore the possibility of a spring season. There are now 41 FBS programs that will not play in the fall in 2020.

The Big Ten has cancelled fall sports, including football. League will consider moving season to the spring.

The Big Ten released a statement shortly after reports leaked about the decision:

“The mental and physical health and welfare of our student-athletes has been at the center of every decision we have made regarding the ability to proceed forward,” Big Ten Commissioner Kevin Warren said in a statement. “As time progressed and after hours of discussion with our Big Ten Task Force for Emerging Infectious Diseases and the Big Ten Sports Medicine Committee, it became abundantly clear that there was too much uncertainty regarding potential medical risks to allow our student-athletes to compete this fall.”

(Aug. 11): UMass, a FBS independent, announced it was canceling football for the 2020 season. The Minutemen were 1-11 last season. UMass is the 27th FBS program to cancel football this season.

(Aug. 11): The Sun Belt announced the conference will proceed with their season, and that it will open its season on Labor Day weekend. The conference, which has 10 members, plans to play eight conference games. Schools have the option to play as many as four nonconference games.

(Aug. 10): Brett McMurphy of Stadium.com reported on Monday that Mountain West Conference presidents voted to cancel the 2020 fall season “because of player health and safety concerns regarding COVID-19.” The MWC, which later confirmed the report, joins the Mid-American Conference as the second FBS conference to cancel its fall season.

McMurphy reported the conference is still considering playing football in the spring.

The cancellation of the MWC season brings the total number of canceled FBS seasons to 26: 12 from the MWC and 12 from the MAC, plus cancellations from UConn (independent) and Old Dominion (C-USA). The MWC featured four teams of 10-plus wins in 2019 (Boise State, Air Force, Hawaii and San Diego State). Boise State is ranked No. 25 in Sporting News’ preseason top 25 of 2020 and received votes in the recently released Coaches Poll.

(Aug. 10): Nebraska coach Scott Frost says the Huskers are committed to playing in 2020. Frost says if the Huskers cannot play in the Big Ten this season they will seek out other options.

“Our University is committed to playing no matter what, no matter what that looks like and how that looks. We want to play no matter who it is or where it is.”#Huskers HC Scott Frost on opponents for 2020. pic.twitter.com/kTPN9znv0v

Expect several other politicians to follow in the coming days.

(Aug. 10): Louisville coach Scott Satterfield didn’t hold back in a Monday press conference. Satterfield said the ACC’s plan is to move forward with football, and he defended his program’s practices.

Scott Satterfield criticizes the leaders of “some of these leagues and conferences” for not sticking to a plan. “That’s not leadership. We had months to plan out how we’re going to come back, how are we going to do this. And we’ve been doing it, our kids have been doing it here.” pic.twitter.com/HExrssFVtf

(Aug. 10): The Athetlic reports Old Dominion, a member of Conference USA, will not play football in 2020.

The Monarchs finished 1-11 last season. First-year coach Ricky Rahne wil have to wait until 2021 to lead Old Dominion on the field.

(Aug. 10): The Detroit Free Press reported the Big Ten will announce Tuesday plans to cancel the 2020 college football season, at least for the fall. Earlier Monday morning, Dan Patrick reported on his radio show that the conference voted and decided to postpone the season by a 12-2 vote. Nebraska and Iowa were reportedly the two schools that voted in favor of continuing the season.

That report has been refuted, according to Husker Oline publisher Sean Callahan:

As for the 12-2…I was told that had to due with a medical call with the Big Ten office and each school. Only Nebraska and Iowa’s medical officials said they were currently comfortable with everything at this time.

According to multiple reports, the Big Ten has yet to vote on a final decision.

Big Ten spokesman said no updates and no votes have been taken at this time.

We Want To Play movement

(Aug. 9): While several college stars have opted out for the 2020 season, others have sparked a movement to save the 2020 season. That includes Clemson quarterback Trevor Lawrence, Fields and Alabama running back Najee Harris. The players said one of the goals is to “utlimately create a college football players association.”

(Aug. 9): The Big Ten is rumored to be the next conference to call off the fall sports season. New Big Ten commissioner Kevin Warren reportedly favors a spring season, and the presidents of the 14 schools meet on Aug. 9. No decision has been made, but Yahoo Sports Pete Thamel reports the league is on the cusp of canceling the season.

Source: Big Ten Presidents remain on the cusp of cancelling the season, but the league isn’t ready to announce. The decision is close, but not final. Big Ten programs have been instructed by Commissioner Kevin Warren to essentially go light in practice tomorrow.

(Aug. 8): The Mid-American Conference became the first FBS conference to postpone the fall college football season. The decision was influenced by Northern Illinois president Lisa Freeman, a former research scientist. The MAC took a financial hit after losing 11 nonconference games with the Big Ten. The MAC has 12 football programs, and the conference is exploring spring football.

(Aug. 5): UConn becomes the first of the 130 FBS programs to cancel its season. The administration cited COVID-19 concerns. The Huskies moved to independent status in 2020-21 after leaving the American Athletic Conference.

How to Preorder the Xbox Series X and Series S: Pricing, Release Date, and More

Jess Grey The Xbox Series X is $ 500, which is about what most next-gen consoles start at. You get 1-terabyte of storage (expandable...
Read more