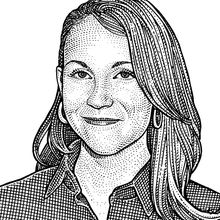 ONE OF MY earliest fashion memories is the “Votes for Women” suffragette sash that Winifred Banks wore in the original “Mary Poppins” movie, set in 1910. The fictional Mrs. Banks was meant to be part of Emmeline Pankhurst’s Women’s Social and Political Union, a British suffrage movement. As early branding masters, the suffragettes on both sides of the Atlantic used sashes, symbolic colors, fans, parasols, fine jewelry and even china to communicate their cause.

Would you wear apparel that urges others to vote? Join the conversation below.

Perhaps not since that Edwardian moment has the word “vote” so infused fashion as it has in 2020. While the most enduring accessories to emerge from the 2016 election cycle—MAGA caps and pussy hats—were squarely partisan, today what’s taking off is ostensibly nonpartisan merch imploring people to vote, period. The trend spans from handmade T-shirts to high-end runway looks, including a gimmicky full-length Christian Siriano gown printed with the word. Every day brings new announcements of socks, ties, T-shirts, sweatshirts, boots, rhinestone clips, boxer shorts—all emblazoned with the plea to “vote.” Andy Bernstein, executive director of nonpartisan voter registration organization HeadCount, observed, “Brands are more conspicuous by their absence if they don’t do something in the voting space.” Many of these companies direct a percentage of sales or other support toward Mr. Bernstein’s HeadCount and similar organizations like When We All Vote, I Am a Voter and Rock the Vote.

But does all this “vote fashion” actually convince anyone to vote?

Celebrities are certainly pushing the concept on their vast platforms. In the past month alone we’ve seen: Diane Keaton in a ballcap reading “Vote bitches”; NBA players Anthony Davis, LeBron James and Quinn Cook in purple long-sleeved shirts from Mr. James’s “More Than a Vote,” an initiative formed this year to counter voter suppression in Black communities; Kendall Jenner picking up smoothies in a “vote” mask; Karlie Kloss squatting in a pair of $ 695 “Vote” boots by Stuart Weitzman; Billy Porter in a massive “vote” caftan; Gwyneth Paltrow wearing gold “vote” stud earrings; and too many T-shirts to itemize. (Actor Sterling K. Brown and DJ Diplo took another approach, posting semi-nude photos of themselves to social media with captions reminding people to register to vote.)

“ ‘When everyone is walking around with shirts and masks that say ‘vote,’’ Mr. Bernstein explained, ‘it’s the most powerful form of endorsement because it’s not celebrity endorsement, it’s peer-to-peer endorsement.’ ”

Perhaps the most viral “vote fashion” moment yet occurred during the Democratic National Convention this August, when Michelle Obama wore a delicate gold necklace that spelled out “vote” from the Los Angeles designer ByChari. It immediately triggered an avalanche of orders for the Black, female-owned brand, and countless copycat necklaces. Every two minutes this September, a shopper searched online marketplace Etsy for “vote”-related jewelry. And there’s plenty to be had. The site’s trend expert Dayna Isom Johnson traces this surge back to Ms. Obama’s DNC appearance: ”I think a lot of sellers were very inspired by that and wanted to ramp up their items that were inspired by that.”

Among the many who felt compelled to purchase a $ 295 ByChari necklace was Dr. Amy Schutt, a fertility doctor in Houston, who wears it peeking out from her scrubs. She explained that as a women’s healthcare provider, she finds that the piece particularly resonates during the centennial anniversary of women’s right to vote. “Certainly, I’m not wearing an elephant or a donkey on my necklace,” she said. “It’s not partisan, but it’s political, right? I support your right to vote but it doesn’t have to be one party or the other.”

Just how charged is the word “vote,” anyway? When celebrities post photos of themselves wearing “vote” merch, they’re often poked in the comments: “For whom?!” HeadCount’s Mr. Bernstein mused, “We’ve gotten to a weird place in our country where the word ‘vote’ seems to be coded as supporting one party or another, but when you think about it that makes no sense because it’s not just one party that votes.” He pointed to the record-setting turnout for all parties during the 2018 midterm elections. HeadCount partnered strategically with popular mall brand American Eagle and its offshoot Aerie on T-shirts and content encouraging young people to vote this season. “I can tell you that a company like American Eagle is totally leaning in to the message and doing it everywhere to every audience,” said Mr. Bernstein.

Roughly 7 million Americans will turn 18 in the lead-up to this election. These newly minted voters might not even buy an American Eagle T-shirt, but they’ll see them on friends and social media. “When everyone is walking around with shirts and masks that say ‘vote,’” Mr. Bernstein explained, “it’s the most powerful form of endorsement because it’s not celebrity endorsement, it’s peer-to-peer endorsement.”

Like HeadCount, When We All Vote is a nonpartisan voter participation group that’s getting in on the fashion game. Most notably, it recently launched a collection of garments designed by the coolest creatives in collaboration with Dover Street Market, a concept store with U.S. locations in New York and Los Angeles. Designer Marc Jacobs modeled his contribution—a sweatshirt marked with a daisy and the words “Choose Your Future. Vote.”—on Instagram, accessorizing the piece with lavender locks and a string of pearls. Cam Hicks, a creative director who’s worked extensively with designer Virgil Abloh, made a sweatshirt printed with facts about Black voter turnout. “I think fashion can definitely turn heads and it can make people more aware and start changing things,” Mr. Hicks said.

Sometimes “vote fashion” appears less focused. This week, Louis Vuitton sent a “vote”-emblazoned top tucked into pleated chinos down its Paris runway. In an accompanying statement, the brand’s creative director Nicolas Ghesquière emphasized the neutrality of the word “vote”: “What if being non-aligned were engaging? Being neutral can be radical. There’s nothing bland about it: neutrality can be powerful, extreme and expressive. It’s a galvanizing exercise. On some styles, prints are made up of words that are like positive injunctions: ‘Vote’, ‘Stand’, ‘Sprint.’”

Cynics allege virtue-signaling, or the expedient use of empty slogans, on the part of greedy brands. But Mr. Bernstein points out that it’s merely a natural marketing move for companies to align their labels with current events. As he said, “More people vote than watch the Super Bowl. So attaching their brands to the election is attaching their brands to something that’s already on people’s minds and that’s just good business.”

Can good business do good? Rachelle Hruska, the founder of New York-based fashion line Lingua Franca, would say so. Among other message-driven clothing, she makes $ 380 cashmere sweaters embroidered with “I Am a Voter” (and childrens’ versions that say “Future Voter”) to benefit the nonpartisan voter-participation group I Am a Voter. She said, “I will tell you that when I wear my ‘vote’ gear, I definitely have more interactions than I would if I were just wearing a plain T-shirt. I don’t know…if those interactions are going to mean people voting, but I get smiles or I get conversation starters.”

And occasionally, “vote fashion” does more than that. When Dr. Schutt was out at a Texan taco joint with her family, her “vote” necklace prompted a conversation with fellow diners which led to one of them registering to vote on the spot. “Was that my intention by going out to eat tacos?” she said. “No, but it did spark a conversation about voting and someone did sign up to vote.”